The Hawkeyes turned in runner-up performances in the decathlon and long jump on Saturday in Minneapolis. 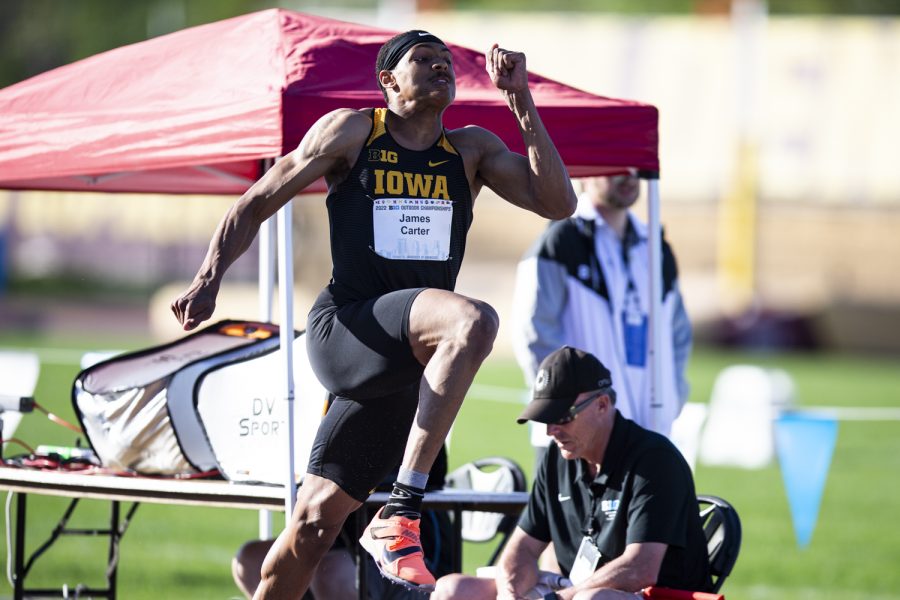 Iowa’s James Carter Jr. leaps in the men’s long jump during day two of the 2022 Big Ten Outdoor Track and Field Championships at the University of Minnesota Track and Field Stadium in Minneapolis on Saturday, May 14, 2022. Carter Jr. placed second overall after his best leap recorded 7.84-meters, about 25 feet and 9 inches.

“Austin had kind of an up-and-down weekend,” Iowa director of track and field Joey Woody said on Saturday afternoon. “You know, I think he started off well in the [110 meter-hurdles], the pole vault didn’t go so well, but he had a strong finish with the javelin. He pulled a big one out on that last throw to win the javelin. I thought he competed really well to get another runner-up place, same as indoor.”

West had an injured hamstring, Woody said, but West fought through it on the final day of the decathlon.

“He’s kind of battling a little bit of a hamstring, so he just needed to work through it,” Woody said of West. “I was proud of how we competed all the way to do that, especially with that 1500 at the end. We’re happy with that.”

“I mean, he’s just the ultimate competitor,” Woody said of Carter Jr. “I mean, look at how many top-three places he’s had, it’s been really impressive … That guy’s just a monster competitor. He came out, put out a really big jump on his second jump [of the second three attempts,] got in a good position, started to build on that, and the guy just passed him.”

Carter Jr. was the Big Ten indoor long jump champion in 2021 and the silver medalist in the same event during the indoor conference championships in 2022.

Outdoors, Carter Jr. was third in the long jump at the 2021 Big Ten Championships and took second in the triple jump.

Apart from the Hawkeyes’ multiple silver-medal finishes, 14 other Iowa athletes advanced through qualifying events to secure a spot in the finals Sunday.

Four of those athletes will represent Iowa in the nine-man 110-meter hurdles final.

Senior Josh Braverman, sophomores Gratt Reed and Grant Conway, and freshman Kalil Johnson were all among the top nine overall finishers in the preliminary heats of the event to earn their way to the final race.

“The guys, you know, they came out on fire,” Woody said of his 110-meter hurdlers. “They’re on a mission. The same thing with our whole team. We’re on a mission to get that trophy and those guys came out, they knew that they needed to step up and they did big-time today. I was really proud of them, really proud of Kalil for making his first final,  those guys really got it done today. That’s what it’s all about is punching tickets and making finals.”

In the women’s 100-meter hurdles, sophomore Paige Magee advanced to the finals.

The Hawkeyes will have one representative in each the 100-meter men’s and women’s final. Sophomore Austin Kresley advanced in the men’s trial and LaSarah Hargrove got through, posting the second-fastest women’s qualifying time.

Iowa will have two athletes in the men’s 400-meter final. Sophomore Khullen Jefferson and freshman Everett Steward posted the third and fifth-fastest qualifying times to secure their spots.

Sophomore Tesa Roberts will be Iowa’s only athlete in the women’s 400-meter final. She snagged the ninth and final qualifying spot.

Iowa advanced two finalists each in the men’s and women’s 800-meters. On the men’s side, junior Alec Still and freshman Antonio Abrego qualified for the finals. For the women, freshman Alli Bookin-Nosbish and Clare Pitcher advanced.

For the women, sophomore Kat Moody recorded a personal-record discus throw of 53.23 meters to earn a sixth-place finish.

“Kat Moody, big throw to make the final and then to have a huge PR to move up from eighth place to sixth, that was huge for her on her last throw,” Woody said. “I was really proud of her. She’s a girl that we’re counting on to do big things for our program and she stepped up today.”

The Hawkeyes will compete in the final day of the 2022 Big Ten Championships on Sunday.

The Iowa men will try to defend their 2021 Big Ten Outdoor Championships title. Iowa is in fourth place in the team race, 12 points behind first-place Nebraska.