Christian Frankl wanted to be a Big 10 drum major for as long as he could remember, and this spring, his dream came true. While studying abroad in Scotland, Frankl spent time out on the grassy hills of Edinburgh practicing his mace routines in preparation to fly back to Iowa City and audition for the desired position. 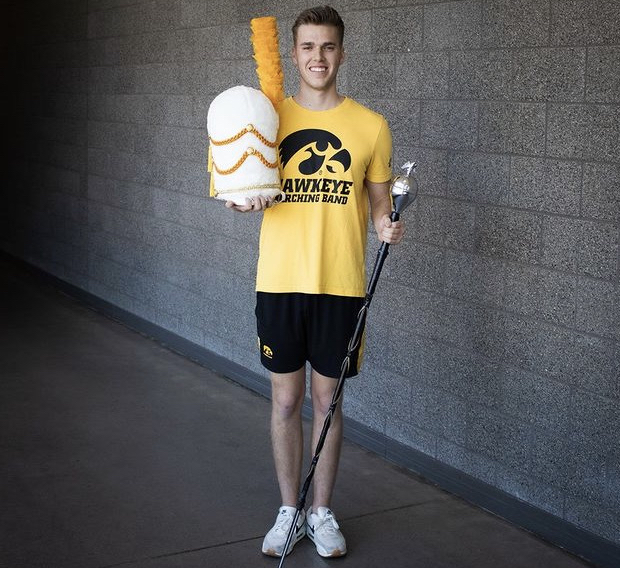 Christian Frankl is currently studying abroad in Scotland, but not for long — he’s coming back in June so he can lead the Hawkeye Marching Band in its most coveted position: drum major.

A junior double majoring in political science and music, Frankl has spent the past semester living and going to class in Edinburgh, Scotland as part of the Iowa Regents Semester Abroad Program.

He joined the HMB his sophomore year, and plays the alto saxophone. Frankl knew that going on this journey was something he wanted to do while in college, but he also knew he wanted to audition for drum major.

“I knew it was going to be a little difficult during the spring semester, but I talked to Dr. Bush during the season and asked if it would be a possibility,” Frankl said. “He said it would be if I can come back to Iowa City for the audition in the spring.”

Lucky for Frankl, he had a break in classes the week of auditions, allowing him to fly home and complete the two-part audition process.

To begin the tryout, he had to have an interview with Hawkeye Marching Band Director Dr. Eric Bush, and then be interviewed by a panel of HMB staff. Over the next few days, drum major candidates participate in learning traditions of the role like the game day run out, salute, and mace toss, along with taking part in a teaching portion to show their skills as future leaders.

As soon as the audition process was over, Frankl had to head back to Scotland to continue his classes in political science. If he were to be selected for the drum major position, he knew he would be getting a call from Dr. Bush.

The next morning, just after he went through security at the airport to head back to Scotland, his phone rang. At the time, however, Frankl was helping a man who was struggling to find his gate, leaving all his belongings, including his phone, on a bench.

“I got back to my phone, and I picked it up and it said I missed a call from Dr. Bush, and I just freaked out,” Frankl said. “I think people in the airport were a little confused about what was happening. It was really cool.”

Frankl was his high school’s drum major, and he auditioned for the Hawkeye Marching Band’s drum major last year as well. Making the cut for his senior year rounds out a dream of his, Frankl said.

His favorite part about being in the 270-member band is meeting all the incredible people involved with it.

“It’s a big group of people and you meet a lot of people from different majors with a lot of different interests,” Frankl said. “We all come together because one, we love music, and two, we love supporting the Hawkeyes.”

With summer just around the corner, it allows Frankl to prepare and look forward to the upcoming semester. Teaching and mentoring the band’s first-year students is a task that he can’t wait to begin.

Ultimately, though, Frankl said leading the band onto Duke Slater Field at Kinnick Stadium in front of 70,000 Hawkeye fans on the first game day this fall is where the epitome of his excitement lies.

“Kinnick Stadium has the best fans in the country,” Frankl said. “The Hawkeye fans love the band, and we appreciate their support a lot. It’s going to be a lot of fun.”