Iowa City juggler Luther Bangert will premiere his new juggling show “Distillations” this weekend at Chauncey Swan Park, focusing on both the conceptual art realm of juggling skills and the technical movements. 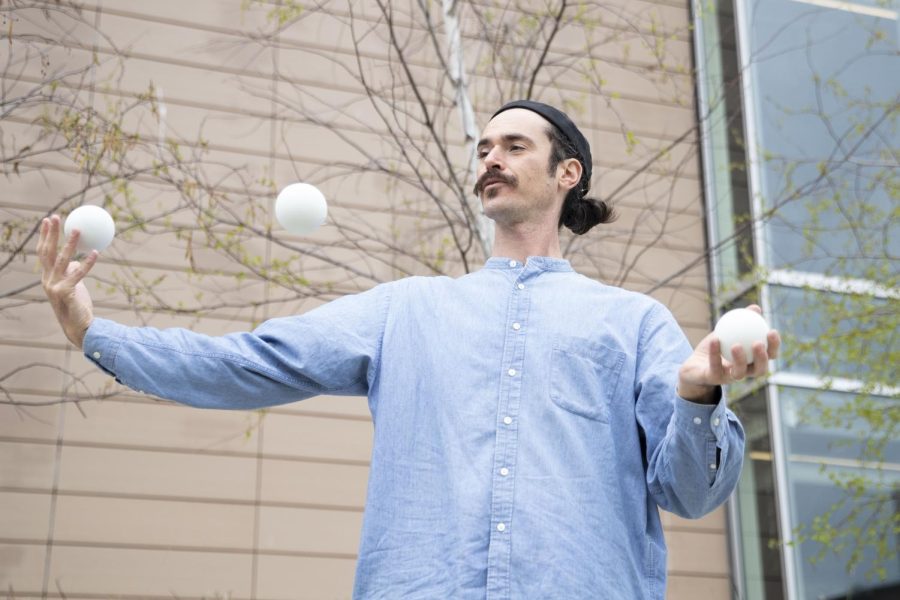 Luther Bangert juggles at Chauncey Swan Park in Iowa City on Friday, May 6, 2022.

As a popular circus act or backyard party trick, juggling seems like it could mean nothing more. However, Iowa City juggler and performer Luther Bangert might beg to differ.

His new contemporary ball-juggling show, titled “Distillations,” will premiere this Saturday, May 14, in Chauncey Swan Park.

Bangert describes the show as a “multimedia, multi-dimensional journey,” with the juggling performance being backed by a video projected onto a large screen. Before the show, there will also be a performance piece from local aerialist, Mimi Ke.

“The way I’m thinking of it is distilling down into one essence or something of what juggling is to me,” Bangert said. “There’s a way in which it’s specific to the way that I juggle, which is a lot of juggling movements.”

Last summer, Bangert began applying for grants because he wanted to expand his juggling act and branch out into longer pieces to showcase his juggling ideas and methods. Being able to stay home to work on diving deeper into physical tricks and the concepts of juggling he was learning about was a silver lining of the pandemic, Bangert said.

After receiving grants from the Iowa Arts Council and the Iowa City Public Art Program, he was ready to add collaborators to the project, and bring his idea to life. Both Bangert and opening act aerialist Mimi Ke are contemporary circus performers that focus on concept and movement more than just their skill.

“It’s really nice to have her on board because there’s not that many circus artists in general in Iowa. So, getting her to do it just feels great,” Bangert said. “It’s not always that easy to find people around here to get a nice, polished show.”

Ke is bringing an aerial silk piece to the show, titled “Moabi” — the Chinese word for a calligraphy brush. The piece focuses on the idea of the movements within the brush and painting with the breath.

She also uses the three elements found in qigong meditation — posture, breath, and visualization — with the end goal of using the silk fabric to create imagery of Chinese calligraphy.

“My favorite part of the piece is a moment where I utilize the fabric, as a costume moment and a transition moment,” Ke said. “I really like to use the apparatus as a dance partner as a prop in a way to tell the story. The fabric lends itself in a really nice way to create costuming moments.”

Being able to share the stage with Bangert is something she calls “rare” in Iowa City. She met Bangert virtually during the pandemic when he had just moved back to the city. Ke said since there are not that many circus artists in town, if you’re in the same regional area, you’re bound to know about one another.

Luckily, the warm spring weather has finally rolled in because “Distillations” is being held outside at the Chauncey Swan Park, next door to FilmScene at the Chauncey. FilmScene will lend Bangert their outdoor summer movie screen so he can project video onto it for the show’s whole 30-minute duration.

The projected film will run back and forth between live juggling and curated video of previous juggling. Andrew Sherburne, the co-founder and executive director of FilmScene, said that they are intrigued by other opportunities of use for the screen, like Bangert’s performance.

“We are always excited by any opportunity to support the local artists,” Sherburne said. “I think this is a great example of something that’s very innovative, that we didn’t even anticipate being a part of, and so to have that opportunity is pretty cool.”

After the premiere on May 14, Bangert will be traveling across town for more free shows in Mercer Park and Willow Creek Park toward the end of May. These shows will not feature the projected screen, but Bangert will offer juggling workshops at the end.

“If people just want to go on the way to something else or anything, it’s a great little sunset moment of the night,” Bangert said.