The Daily Iowan • May 10, 2022 • https://dailyiowan.com/2022/05/10/speed-running-college-nontraditional-university-of-iowa-students-prepare-to-graduate-ahead-of-peers/

‘Speed-running college:’ Nontraditional UI students prepare to graduate ahead of their peers

Two University of Iowa students are getting ready to graduate at a younger age than the rest of their peers after they decided to speed up the process to receive their degrees. 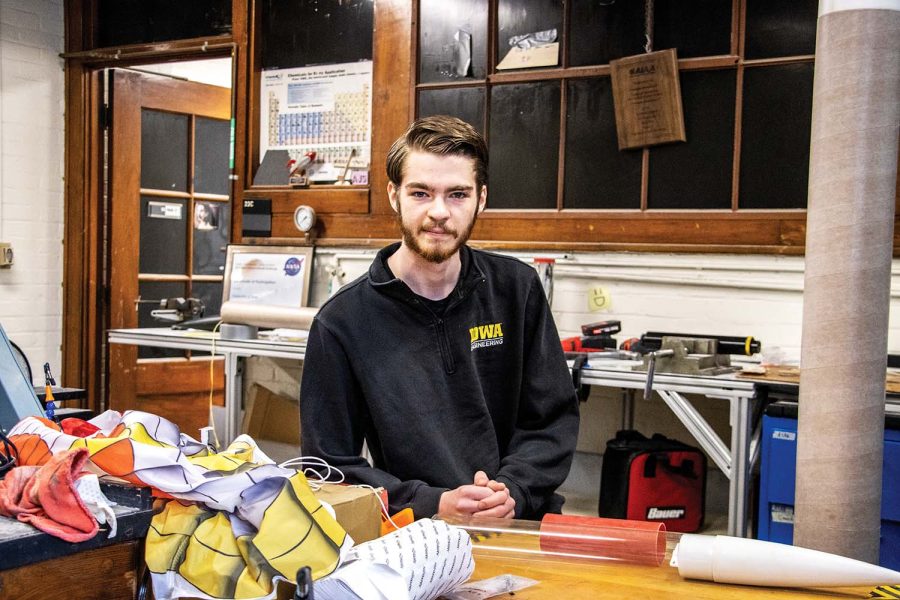 Kyle Lastine, a fourth-year student who will be graduating in May, poses for a portrait in the Chemistry Building on Monday, April 25, 2022. Lastine entered the University of Iowa at age 16 through the Bucksbaum Early Entrance Academy.

At age 16, Kyle Lastine wanted to accelerate his postsecondary education.

Lastine is set to graduate from the University of Iowa in May at 18 years old. He completed his undergraduate degree in three years and is one-third of the way done with his master’s degree.

Lastine sped up his college process by entering the UI’s Bucksbaum Early Entrance Academy at age 16, which allows high-achieving students to begin full-time, on-campus study at the university following their sophomore year of high school.

Lastine said he applied to the program after realizing it could help him get a jump-start on his degree. He was accepted into the program and skipped his junior and senior years  of  high school in Johnston, Iowa.

“I had kind of felt like I had done everything that I wanted to that the high school would have offered, and then I also realized that college classes are a lot more targeted and faster than high school ones,” Lastine said. “I just thought it would be a better use of my time to do everything here.”

Lastine graduated from high school in May 2021 by transferring university credits back to his school. At the time, he was also over halfway done with his undergraduate degree in computer science and engineering at the UI.

“I’ve always been into computers more than anything else,” he said. “Once I got to college and started interacting with a lot of mechanical engineers, I kind of got into the mechanical side of it, too.”

Walking around campus with college students at age 16 was intimidating at first, Lastine said, but it became normal after a while.

“When you get into the classes and you start doing as well as they are, then you realize, yeah, it doesn’t really matter,” Lastine said. “I don’t think it really made much of a difference. No one has ever guessed that I’m younger than my grade would suggest.”

While working to finish his undergraduate degree early, Lastine’s path is also unusual as he is taking dual enrollment classes to finish his master’s degree.

“Right now, I’m in three classes that will count towards my undergrad and master’s degree even though I’m only taking them once,” Lastine said. “That’s, like, a third of my master’s degree for the low, low price of nothing because I would have taken them anyways to graduate the first time.”

Next year, Lastine will continue taking classes for his master’s degree in computer science, while working as a software engineer at Collins Aerospace in Cedar Rapids.

For Lastine, the college experience was about finishing in an efficient manner.

“People hear what I do, and then they think that I love school … I’m using the program to get a good chunk of my master’s out of the way for fewer classes,” Lastine said. “It’s just getting the most reward out of the least amount of effort, really.”

Jacob Sammon, a UI third-year and first-generation student, is also completing his degree in three years. For Sammon, his early graduation is possible because his counselor suggested that he take dual-credit classes in high school.

Sammon decided to fill his high school schedule with dual-enrollment classes but said it was an added layer of stress because, if he failed a class, it would show up on his college transcript.

Ultimately, he decided to enroll in the classes so he could go to a university after high school.

“I thought this is going to be my best, most efficient way to be able to get the money rather than hoping for a bunch of scholarship money,” Sammon said. “I figured I could earn my way doing this, and so I spent a lot of time prioritizing taking these classes, making sure I was getting good grades.”

When Sammon graduated high school, he also graduated with an associate’s degree, which transferred over to the UI.

From a financial standpoint, Sammon said it made a huge difference for him to come in with an associate’s degree.

Originally, Sammon planned to come to the university for two years then graduate with his undergraduate degree, but his mind changed after his first year at the UI and talking to his adviser about campus involvement.

“I can get a job on campus,” he said. ” I could devote more of my time to being involved in the community, and doing some extracurricular work rather than just focusing on classes, I could get an internship, I could do all of these other things.”

Because Sammon decided to stay for a third year, he could explore his love of writing and find his passion for literary publishing by joining the publishing track in the English major.

“I came here thinking like yes, I’m going to enrich my writing,” Sammon said.
“And then I learned that literary magazines exist, and I actually really liked the process of what goes into making a book and being an editor.”

Due to his head start in his education, Sammon said he was able to find his career goal, leading to his post-college plan of attending Columbia University in New York for the publishing institute program with Penguin Random House.

“If I hadn’t received that associate’s degree, I would have never needed the reason to spread out my schedule more, and I probably might not have explored the literary publishing track,” Sammon said. “Now, that’s what I want to do for the rest of my life.”

Overall, Sammon said if he’s learned anything over the past few years, it would be to slow down, appreciate what you have, and not worry about who you need to be. He said he hopes other UI students learn that as well.

“I hope that [students] can just take a second and focus on that right here, what’s right in front of you, and exist in this moment and realize that what you’re doing right now is important too, if you let it be,” he said.