The Daily Iowan • May 5, 2022 • https://dailyiowan.com/2022/05/05/activists-gather-outside-emma-goldman-clinic-following-leaked-supreme-court-decision/

The leaked draft opinion from the Supreme Court would overturn the landmark precedent, and leave regulating abortions up to the states. 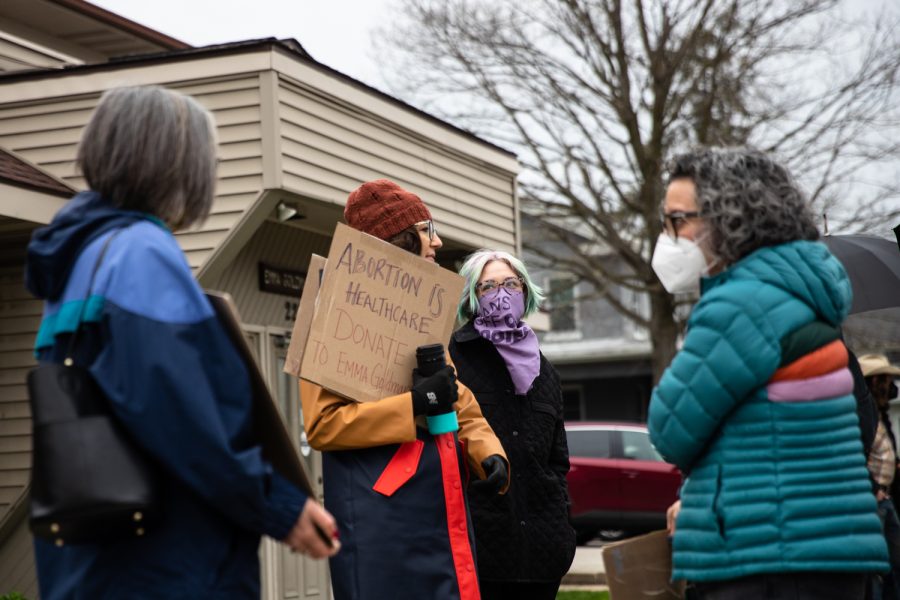 In response to the leaked United States Supreme Court draft decision to strike down Roe v. Wade, anti-abortion and abortion-rights demonstrators showed up at the Emma Goldman Clinic in Iowa City Thursday morning.

The draft opinion would leave decisions on abortion rights to the states and overturn more than 50 years of precedent.

Every Thursday, the Emma Goldman Clinic provides abortions to patients who are seeking one. The clinic provides reproductive health care for patients of any gender.

One way abortion-rights advocates can keep abortion accessible and legal, University of Iowa professor Lina-Maria Murillo said, is by making sure Iowans vote for politicians who care about bodily autonomy and reproductive rights.

“We have to lobby and work hard to make sure that the people that we do vote into office, keep their central promises,” Murillo said.

Murillo said she frequently stands outside in support of the clinic and decided to come this week following the draft opinion.

In Iowa, where Republicans have the majority in the state House, Senate, and hold the governership, the ruling could lead to more restrictive abortion laws.

The Iowa Legislature passed a law in 2018 that would have banned abortion if a fetal heartbeat is detected, which can happen as early as six weeks of pregnancy.

The law was struck down by a state judge. In response, Republicans are working to pass an amendment to the state constitution to say abortion is not a right in Iowa, which could appear on the ballot in 2024.

“As we await the Supreme Court’s final ruling, our mission remains as clear as it has ever been. We are fighting to defend the most important freedom there is: the right to life,” Gov. Kim Reynolds tweeted on Tuesday.

Jeannie Haight frequently protests against abortion in front of the Emma Goldman clinic.

Haight said she hopes Iowa passes more restrictions on abortion in the near future.

Johnson County Supervisor Jon Green said he comes to the clinic as often as he can to show support.

“[I’m here] to stand in solidarity both with the folks who work inside and who use their services,” Green said. “They provide important services.”