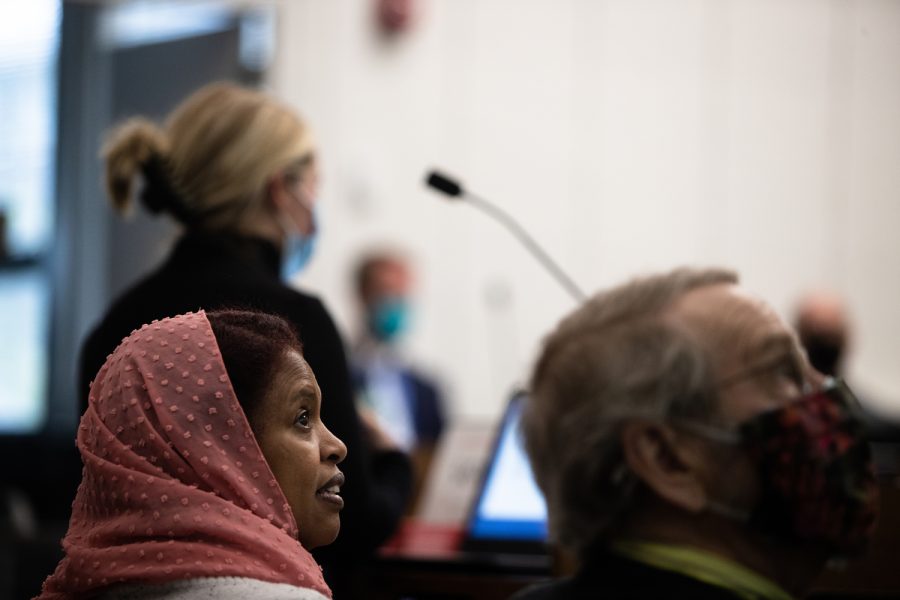 Executive director Mazahir Salih looks at a presentation at an Iowa City City Council meeting at City Hall in Iowa City on Tuesday, May 3, 2022.

The City Council discussed using the funds for nonprofits to aid residents negatively affected by COVID-19 financially, including the Center for Worker Justice of Eastern Iowa and Shelter House.

“I think there was a lot of discussion here with some  consensus that we do want to make sure that we have an application process that is open to the public. We want to be very transparent and communicative about this process,” Mayor Bruce Teague said at the council’s Tuesday work session.

City Manager Geoff Fruin said the City Council will wait for staff reviews of the urgent needs category before making its decision on how to spend the funds with nonprofits.

“I would suggest that you allow us to come back with a look at this urgent needs category,  allow staff to give you a recommendation on a process,” Fruin said. “I’d recommend the lower end and the $500,000 because we’re already over on two of those other categories,”

The Forest View mobile home park relocation program received $1.2 million from the American Rescue Plan Act funds — close to going over the original budgeted amount for this program, which was $1.5 million.

The City Council also started discussions on other potential funding initiatives, including using the American Rescue Plan Act funds to prevent evictions in the city.

“We’re probably looking at the lower end of that range closer to the $1 million as opposed to the $2 million, but from a staff standpoint and talking with some of the nonprofit housing providers, we do think eviction prevention, additional eviction prevention efforts will be necessary, despite the state’s commitments,” Fruin said.

The City Council discussed the possibility of using American Rescue Plan Act funds to support the Center for Worker Justice of Eastern Iowa’s efforts to address wage theft in Iowa.

The center sent a letter to the city council on April 18 asking it to allocate $17,000 annually.

The council gave direction to city staff to put together an agreement to help the Center for Worker Justice, but it is unclear if the council will use American Rescue Plan Act funds for the program.

Teague said the council will wait on staff recommendations before making a decision regarding the Center for Worker Justice’s letter.

“It does appear that this council wants to treat that as a separate kind of item, which is what I’m hearing,” he said. “I’ve seen a lot of nodding of heads to direct staff to move forward with the agreement on that, all right, so that’s great.”

Fruin said the council will vote on the next use of American Rescue Plan funds as soon as the city staff comes back with proposals.