Stringer, who coached the Hawkeyes from 1983-95, led Iowa to its only Final Four appearance in 1993. 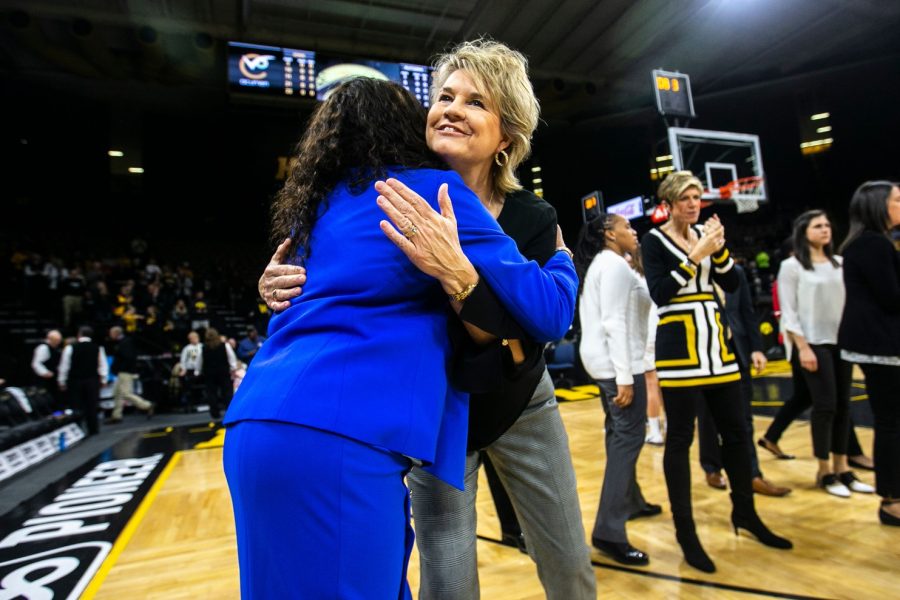 Former Iowa women’s basketball head coach C. Vivian Stringer, who was with the Hawkeyes from 1983-1995, announced her retirement from coaching on Saturday morning.

Stringer has been a head coach for over 50 years, totaling four Final Four appearances, 28 NCAA Tournament berths, and 1,055 wins across three institutions. Stringer was the first men’s or women’s collegiate basketball coach to bring three separate schools to the Final Four.

“I am officially announcing my retirement,” Stringer said in a release from Rutgers University. “My life has been defined by coaching and I’ve been on this journey for over five decades. It is rare that someone gets to do what they love for this long and I have been fortunate to do that. I love Rutgers University for the incredible opportunity they offered me and the tremendous victories we achieved together.

“There’s always a soft spot in my heart for the University of Iowa and Dr. Christine Grant for giving me my first major coaching position, when me and my husband trusted her to move our family to Iowa. She was a strong believer in women’s rights and that’s a responsibility that I have championed and will continue to take up the fight for.”

Current Iowa women’s basketball head coach Lisa Bluder, who has been at the helm of the program since 2000, congratulated Stringer on Sunday afternoon.

“Congratulations to Vivian on her retirement,” Bluder said in a release from Iowa. “She truly is one of the pioneers of our game. I owe her so much personally as she jumpstarted the University of Iowa basketball program and laid the foundation for our success.”

Stringer, a Naismith Basketball Hall of Fame coach, led Iowa to its first and only Final Four appearance in the 1992-93 season. She started her head coaching career at Cheyney State in 1971, leading the Wolves to an NCAA National Championship Game appearance in 1981-82.

“After recently celebrating the first women’s Final Four team at Cheyney State University, where it all started, it sat with me that I have been at this for a long time,” Stringer said via release. “It is important to step aside and challenge others to step up and take this game forward. I am forever indebted to all the coaches who I worked beside.”

After leaving Iowa in 1995, she headed to Rutgers University. Stringer has been the Scarlet Knights’ head coach for 27 years, the longest tenured coach at Rutgers. Under Stringer’s command, the Scarlet Knights went to the Final Four in 2000 and the national championship game in 2007.

“Coach Stringer thank you for elevating our game,” South Carolina women’s basketball coach Dawn Staley, who won the 2022 national championship, said on Twitter. “The strength of your shoulders allowed us to stand tall. We will forever keep your legacy in our hearts. Thank you Coach Stringer.”

Coach Stringer thank you for elevating our game. The strength of your shoulders allowed us to stand tall. We will forever keep your legacy in our hearts. Thank you Coach Stringer. https://t.co/fWl1MFRym1

“To the young ladies that I was fortunate to have coached and mentored into the women and leaders of today, keep pushing the barriers, keep pushing for your spot at the table, and always know who you are,” Stringer said via release. “This was the hardest decision of my life, but I thank God he has allowed me to do the thing I love most. I am ready to start my new journey and spending more time with my family, children, and grandchildren. I am truly blessed to have had so many wonderful people in my life.”

Stringer stepped away from coaching in the 2021-22 season because of concerns about COVID-19. Scarlet Knights associate head coach Timothy Eatman led Rutgers to an 11-20 overall record in 2021-22.

Stringer will officially retire on Sept. 1, 2022, and be paid $872,988 as part of her retirement agreement. Rutgers will immediately start a national search for a new head coach.