Kellyanne Conway stands up for young conservatives on campus

Kellyanne Conway, former Trump campaign manager, told University of Iowa Students on Thursday to stand up for what they believe in even if they do not feel comfortable doing so on campus. 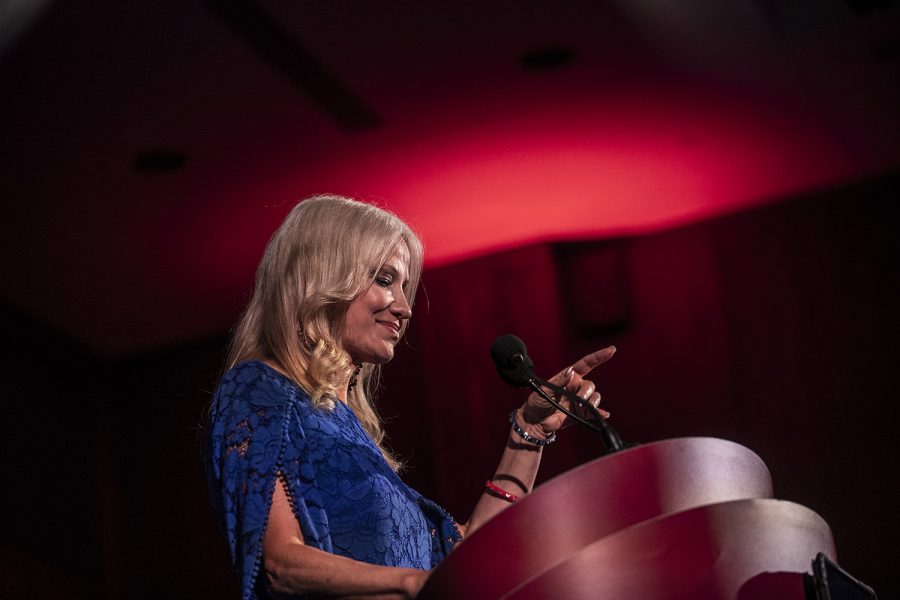 Former Trump advisor Kellyanne Conway speaks during her visit to the University of Iowa at the Iowa Memorial Union on Thursday, April 28, 2022. Iowa Young America’s Foundation organized the event.

Conway told the Iowa Young Americans for Freedom chapter that they are on the right side of history. She said young conservatives have the time and power to change the future by sticking up for their beliefs on campus.

“You’re being marginalized. It’s very important to show up and be honest and to speak up,” Conway said.

According to the University of Iowa’s 2021 Campus Climate Survey, 56% of conservative students feel as though their conservative identity is not respected on campus.

Conway told an audience it is a hard time to be a conservative due to a democratic majority in both chambers in Washington D.C.

“Now we have chaos everywhere we look,” Conway said of the Biden admistration.

The changes in education — like forcing students to learn virtually — and the increase in gas prices and crime rates in cities are examples of chaos in the Biden administration, Conway said.

Coway speaks on Biden’s current standing in the polls, saying they are declining. Biden currently has a 41 percent approval rating with young Americans.

“What we do in this country is look for leadership. We look for bold ideas, look for promises that are being kept,” Conway said.

Concerns were raised on conservative college students’ fears of not speaking their minds on college campuses. She said to hold more debates between the groups so both can learn from each other despite their disagreements. Conway did not specify how students should do this.