This Friday, in honor of Asian American Pacific Islander Heritage Month, the Iowa City Area Chinese Association will host a wide range of performances this Friday, April 29 at the Coralville Center for Performing Arts. 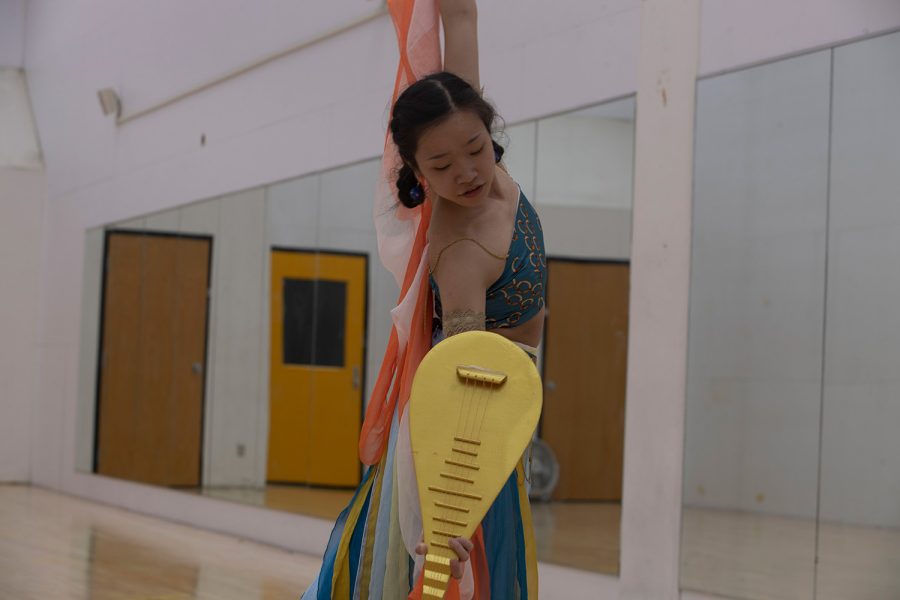 Yifeng Zhang, a dancer performing in An Evening of Chinese Performing Art poses for a portrait at the Field House in Iowa City on Tuesday, April 26, 2022.

In honor of Asian American Pacific Islander heritage month, the Iowa City Area Chinese Association will host an evening of performing arts to explore a range of cultures and artistic mediums.

The performance will take place on Friday, April 29 at the Coralville Center for Performing Arts. The ICACA’s performance will consist of 11 acts that range from singing, dancing, as well as instrumental performances. Each performance has a different theme to pay homage to Chinese and Asian Islander cultures.

Yifeng Zhang is a fifth-year graduate student at the UI. Zhang is a part of the Chinese Classic Dance Club, and will perform the dances Huo Yuan Jio, and Hong Yin.

The Hong Yin is a traditional Chinese dance duet — Hong Yin is an important city in China, and the inspiration for the dance comes from paintings in the caves of Hong Yin.

The ancient Silk Road was a major trade route for goods and culture that went to Europe. The Silk Road allowed Buddhist culture to expand to Europe.

“Mogao Cave is one of the major centralizing locations for those caves, where people went in and they could see paintings inside the caves, and they are typically depicting what people now think are Buddhas on the walls,” Zhang said.

Na Li is the producer of the event, and said the dance will attempt to capture what their ancestors saw in the paintings in those caves.

“It got its inspiration from the Buddha’s position. It’s really unique the way you see them dance, you can tell from their hand and leg shapes,” Li said.

The age range in this performance is from 5 years old to adults. The performance will open with a rendition of the song, “Where the Peach Blossoms are in Full Bloom” performed by Fuquan Wei and pianist Ming Hu.

“When you listen to the song, you imagine yourself in the mountain full of peach blossoms,” Li said. “Peach blossoms bloom in the spring, so we start the event with the spring song.”

The Children’s Choir Club will be the fourth act in the performance, and will perform the song “How Far I’ll Go” from the Disney movie Moana. This performance will allow Hawaiian culture to be explored through the event, Li said.

Yaling Yi, the founder and former president of the ICACA, wrote in an email to The Daily Iowan that the mission of the ICACA is to build a diversified, supportive, and inclusive local community through a series of cultural events and community volunteering.

“We are proud to make high-quality multi-cultural events available to Iowa City, Coralville, and the surrounding areas,” Yi wrote.

This event was originally planned to take place during the Lunar New Year in January, but was postponed because of COVID-19-related concerns.

Li said that both the Coralville mayor and Iowa City mayor are scheduled to attend the event, and that she ultimately hopes to have an audience ranging from 200 to 300 people.