Iowa City West senior Abbey Schley started the I’m Glad You Stayed Program, a suicide-prevention nonprofit, after losing her friend to suicide a year ago. 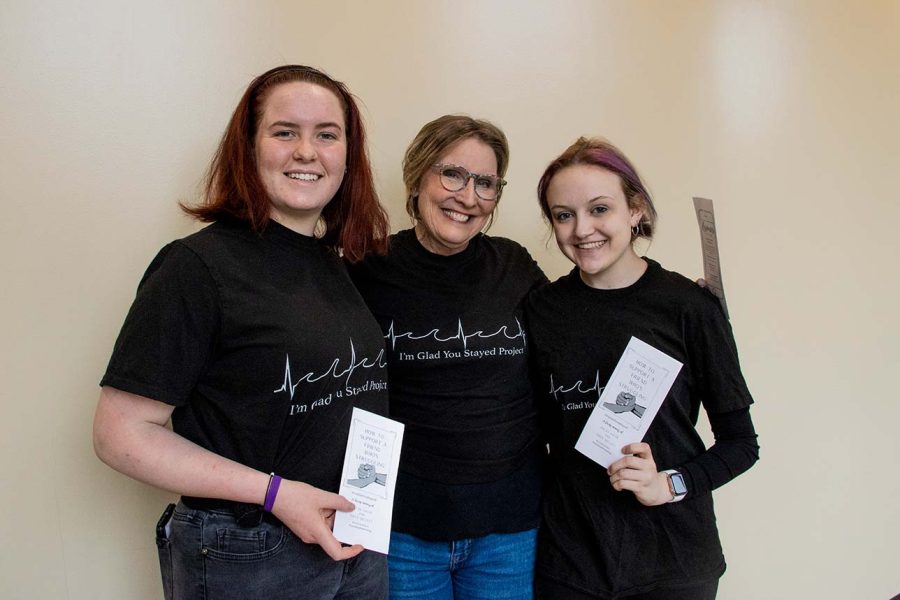 Nikki Pinter, Dottie Schley, and Abbey Schley, pose for a portrait at the Iowa Memorial Union in Iowa City on Wednesday, April 19, 2022. Abbey Schley started an organization known as the I’m Glad You Stayed project, which raises awareness for teen suicide. The project was created in loving memory of Dylan Salge.

Abbey Schley, a senior at Iowa City West, started a suicide-prevention nonprofit after not knowing what to do when her friend, Dylan Salge, texted her in a moment of crisis in March 2021.

Schley said she told her mom know about the text, and her mom called the non-emergency line to let the police know what was happening.

“I realized the night we lost him, I had no idea what you’re supposed to do for someone who is struggling with suicidal ideation,” she said. “And I didn’t have any resources.”

After losing Salge to suicide and hearing about another suicide in the area, she said people began deciding that enough is enough.

The I’m Glad You Stayed Project was designed by Schley to give people resources, so they know what to do when a friend or loved one is dealing with thoughts of suicide.

According to the National Institute of Mental Health, suicide was the second-leading cause of death for people aged 10 to 24 in 2019.

The program has given out wristbands with suicide-prevention resources listed on them, along with pamphlets, encouraging people to learn the contact information and addresses of their friends’ families, specifically their parents or guardians.

Micki Salge, Dylan’s mother and treasurer of the I’m Glad You Stayed Project, said that because her family moved to Iowa City shortly before COVID-19, she never got the chance to meet many of Dylan’s friends.

As a result, when Dylan messaged his friends to tell them he was having thoughts of suicide, they weren’t able to contact his family, she said.

Schley said spreading the word about the program hasn’t always been easy, as there is still hesitation in schools around talking about suicide. She said that, while schools are doing better at educating students on mental health, they still are not doing enough.

“When Dylan died, we didn’t even have grief counselors at the school,” she said, “We go to these events and bring our pamphlets and bracelets and kids are literally saying, ‘Thank you so much for doing that, because no one else is doing it.’ No one else is talking about it, and it’s going to keep happening if we don’t talk about it.”

Dottie Schley, founding member and secretary for I’m Glad You Stayed Project and Abbey’s mother, said her daughter’s age helped the nonprofit communicate with many adolescents.

“I think the fact that it’s coming from students makes a big difference than the adults in the room trying to talk,” she said.

Dottie also created a film about Dylan’s death, called “Aftermath,” in which Abbey and Micki reflected on Dylan’s death and their experiences with him.

In the film, Micki reflected on how Dylan didn’t feel that he deserved help because other people had bigger problems than him.

Abbey said she has struggled with mental illness herself, dealing with anxiety and depression, along with being hospitalized twice since Dylan’s death because of suicidal ideation.

“After Dylan died, I had a lot of guilt,” she said. “I think I’ll always have questions that I just wished I could have answered from him. I think in the first nine months of him being gone, I couldn’t stand the fact that I didn’t know the answers to it.”

In early March, another high school student in Johnson County took his life. Abbey said that, in the last month, the I’m Glad You Stayed Project gained even more traction.

On top of the program’s Instagram follower total jumping from 200 to over 1,400, more people are requesting bracelets and pamphlets from the program, she said.

“People are hungry for the information,” she said.