College students are joining many Americans in taking part in sports betting as favorite leagues changed their stance on the issue. 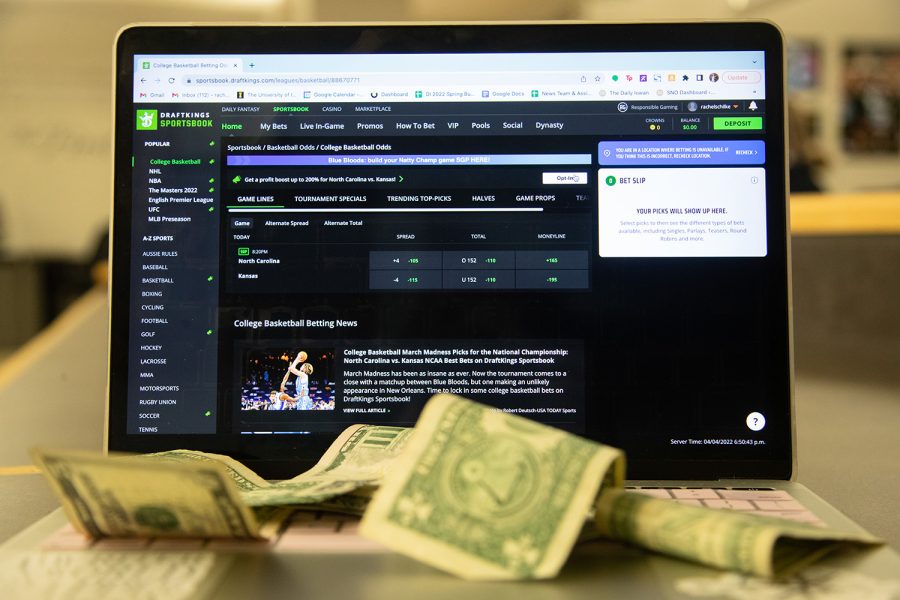 The number of Americans placing bets is rising, and University of Iowa students are joining in.

According to Forbes, the number of American adults regularly betting on sports rose from 5 percent to 12 percent in 2021. Americans bet an estimated $3.1 billion over the course of March Madness.

Professional sports leagues like the NFL, NBA, NHL, and MLB, which once stood against sports betting, are now partnering with online betting companies. Online betting services spent over $700 million on TV ads in 2021, compared to $292 million in 2020.

The heavy advertising on the part of sports betting companies can potentially be problematic for those with addictions who are trying to quit, Schmitt said. She added that social connections and sometimes social pressure can contribute to the reason betting is becoming more common among young people.

Pete Ruden, associate editor for The Action Network, a sports media company with a predominant focus on sports betting, said sports betting differs from casino games like blackjack or slots because of its unpredictability and the level of skill it involves.

“There’s so much research that goes into sports betting that I didn’t realize when I was in college,” he said, “Ever since I started working out in the real world, advanced stats and advanced analytics have kind of been my go-to’s.”

When betting on football, Ruden now looks at more advanced stats like offensive success rate instead of statistics like yards per play.

While there are things players can do to give themselves better chances, Ruden expressed that betting successfully is still a challenge.

“Going .500 isn’t easy and you will need a 53 percent winning percentage typically to actually profit,” he said.

Andrew Brandt, a former Green Bay Packers executive and the director of the Moorad Center for the Study of Sports Law at Villanova University, said in a Vox article that the gambling industry is searching for a younger audience.

“I’m wagering anywhere from $200 to $350 per day,” he said. “That’s seven days a week and on the weekends, you could probably double that amount wagered.”

Wilson mostly bets online, but also goes to the Riverside Casino two or three times per week, he said.

He started out mostly betting on the NFL, NBA, MLB, and NHL. When the pandemic started, he turned to e-sports, along with sports being played abroad like cricket and ping pong.

Now, he said he bets mostly on college football and college basketball, citing that college sports are where the most money can be made.

Wilson said his betting tendencies have hindered his finances at times, but not to an extreme level. He said there have been instances where he’s needed to borrow money from friends and vice versa, along with times where he’s had to limit his grocery budget.

On the other side of the coin, Wilson said there have been good weeks in which his betting has allowed him to go out to eat a couple of extra times or get another drink at a bar.

While Wilson enjoys betting, he understands the risks involved and what it can do to people in terms of addictions and financial struggles.

“There’s no doubt that more people lose than they win,” he said. “Every book is very, very profitable. And I would say that you are set up to lose. There’s very, very few long-term profitable sports gamblers.”

“I know for a fact I could stop,” he said. “I have that kind of willpower. But … I would never want to stop. Even if you have as little as a dime off the ground on a game, it makes it that much more entertaining and easy to engage with.”

Jacob Bruss, a fourth-year student at Iowa State University, said he got into sports betting in fall 2021 because of a promotion that would award money to both him and the friend who recommended the app to him.

Bruss said he doesn’t bet often and seldom puts down more than $5. The most he’s made off a single bet is $200, he said, which he won from a Buccaneers game this past season.

“I personally do it more as a communal thing,” he said. “I think it adds a little bit more enjoyment to watching the game with people.”

Editor’s Note: Pete Ruden previously worked for The Daily Iowan when he was a student at the University of Iowa.