The two cities and the University of Iowa’s bus system announced in press releases on Tuesday that the requirement for people to wear masks on public transportation has been lifted. 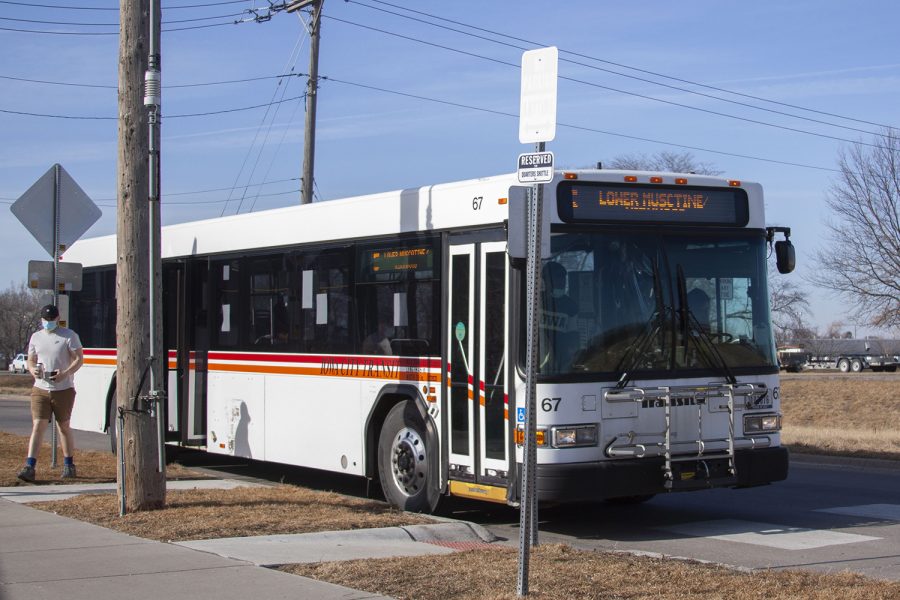 Passengers exit from the Iowa City bus to the bus stop at The Quarters apartment complex in Iowa City on Wednesday, March 2, 2022.

Masks will no longer be required on Iowa City and Coralville public transit and the University of Iowa’s Cambus vehicles after a federal judge struck down the nationwide mask mandate for public transit systems.

The decision, from a federal judge in Florida, came Monday and allows public transit systems to make their own decisions regarding mask mandate implementation, instead of being required to follow Centers for Disease Control and Prevention policies.

The decision struck down mandates on buses, airplanes, trains, and any other form of public transportation.

The University of Iowa Cambus system ended its requirement in accordance with the ruling on Tuesday, according to the UI transportation website. Students and other community members who ride the buses will no longer need to mask up while taking routes provided by the campus service.

“However, with COVID-19 still present in our community, face masks remain an effective tool for protecting yourself and others against the virus,” the press release read.

Iowa City announced its decision to make masks on buses optional on Tuesday via a press release.

“In accordance with Monday’s federal court ruling striking down the federal mask mandate pertaining to public transportation, and subsequent guidance from the Transportation Security Administration, Iowa City Transit users will no longer be required to wear a mask on public transit vehicles or at transit stops,” the press release states.

The city is recommending patrons use masks while using indoor public transportation, as they state masks are still an effective means to prevent the spread of COVID-19. Iowa City originally extended its mask requirement until May 3 after the U.S. Transportation Security Administration extended its requirement per the CDC’s recommendation.

“We want to thank Iowa City Transit passengers who have masked up to help keep themselves and the community safe during the pandemic,” a March 15 press release stated.

Coralville Transit also ended its mandate on Tuesday. In a press release, the City of Coralville thanked passengers for their compliance with the mandate through the past year. The city’s buses will all continue to have masks available for riders.

The mandate was lifted in Coralville for transit stops and the Coralville Transit Intermodal Facility alongside vehicles.