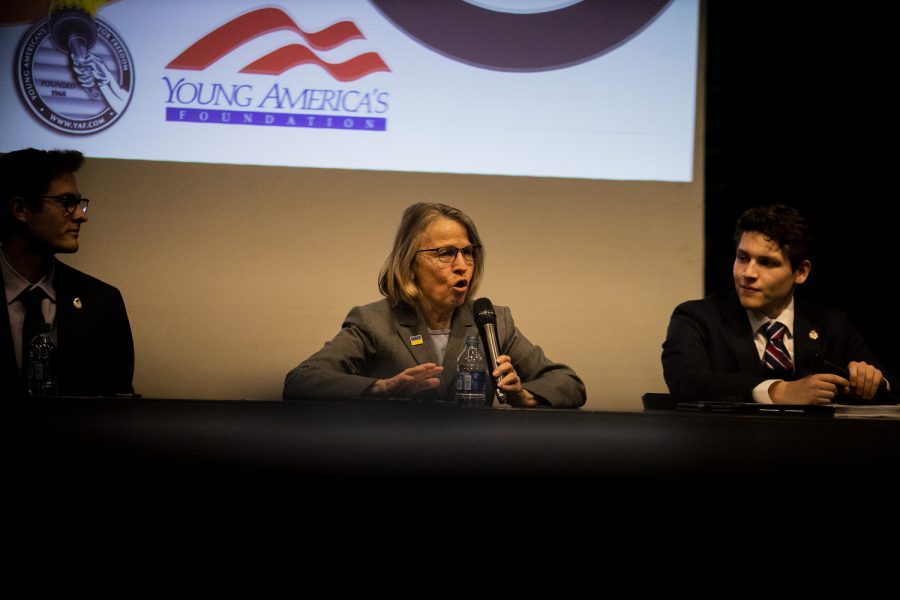 Rep. Mariannette Miller-Meeks, R-Iowa, speaks to a group of students during her visit to the University of Iowa at the Iowa Memorial Union on Wednesday, April 13, 2022. Mariannette spoke to students about sustainability and the environment. Iowa Young Americans for Freedom organized the event.

Miller-Meeks visited the University of Iowa Wednesday night to speak at an event hosted by the Young Americans for Freedom where the theme of the evening was energy and climate on the UI campus.

“I think there needs to be a willingness to continue to converse and talk and then to help the administration have an energy policy that makes sense and is cohesive,” Miller-Meeks said.  “It’s not, you know, a one size fits all. There are different states that have different needs.”

The Young Americans for Freedom, along with Citizens for Responsible Energy Solutions, held a forum in the IMU that focused on what the YAF called “environmental alarmism” and “climate hysteria” with around 30 people in attendance.

At the event, the groups handed out fliers urging attendees to “Save the Earth from Environmental Alarmism” that discounted the science behind climate change. These fliers listed climate activists like Bill Nye and Greta Thunberg as people who are exaggerating the effects of climate change.

Scientists almost universally warn that climate change is poised to cause disastrous effects across the globe, largely caused by the burning of fossil fuels like gasoline and coal.

A February report from the Intergovernmental Panel on Climate Change found that climate change-related weather events are already displacing millions of people around the world and will likely get worse if temperatures keep rising. Last week, a report from the same panel found that in order to keep global warming below 1.5 degrees Celsius compared to pre-industrial levels, greenhouse gas emissions must be reduced by 84 percent by 2050.

Miller-Meeks never acknowledged climate change directly at the event, instead pointing to efforts to preserve water and air quality.

She said that conservation efforts are important for Iowans because of the state’s agriculture industry and recreational trails.

According to the Iowa Environmental Council, 54% of Iowa waters are impaired. By bringing farmers to the conversation, Miller-Meeks said, greener agriculture practices have been adopted to combat the harm done to the state’s water quality.

“Farmers are stewards of the environment. They have a lot to say,” Miller-Meeks said.

In an interview with The Daily Iowan, Miller-Meeks said the bipartisan solution to climate change is an understanding that one policy may not work for every state. For example, she said, electric vehicles are not always a viable option for rural Iowans so deriving a plan to keep carbon emissions down while still using fuels and biofuels is important to her.

“There’s a lot of support for ethanol…and if we can kind of get together and work through that, with the help of the administration having an energy policy, I think we would be able to achieve that,” Miller-Meeks said.

Just a day earlier, President Joe Biden announced that he, along with the EPA, will be allowing the sale of E15 through the summer months. Miller-Meeks said that this expansion will help to lower emissions and makes sense for agriculture-heavy states like Iowa.

Iowa politicians often point to biofuels as a source of clean energy, but a recent report from the National Proceedings of the Academy of Sciences found that when land use increases are taken into account, ethanol is more carbon intensive than gasoline. The Renewable Fuels Association argued the report was inaccurate.

With less than seven months until the midterm elections, Miller-Meeks is hoping to be reelected to a district that’s changed somewhat from the one she was elected to by only 6 votes. She said she continues to learn something new whenever she is campaigning.

Miller-Meeks said that while she campaigns, it’s more important for her to hear what is important in her district and what her constituents are concerned about.

“I’ve learned today that the climate is very important to students here, that they’re thinking about this issue, thinking about, you know, strategic ways in which they can move that needle forward, but do it in a way that still allows them to have jobs, allows them to travel and to meet their needs,” Miller-Meeks said. “And so that’s, you know, helpful to know.”

Miller-Meeks faces a Democratic challenger in Christina Bohannan, a UI law professor who represents Iowa City in the state House of Representatives.

If Miller-Meeks is reelected, she said she hopes to join the House Energy and Commerce Committee.

Wyatt Phillips, UI freshman and Chair of the Young Americans for Freedom Iowa chapter, moderated the forum. He asked about how conservatives can have valuable discussions about climate with people across the aisle.

Miller-Meeks said that students need to be given the right tools to talk about the environment because both sides agree that the country needs cleaner and healthier air and water, but just disagree on how to do so.

“You can all talk about energy in a way that is meaningful, has significance to you, and it underscores the fact you’re just as interested in clean water, cleaner air, trails and the outdoors as anybody else who is pushing a different type of policy,” Miller-Meeks said.

Editor’s note: A previous version of this story said the University of Iowa College Republicans helped organize the event. The story has been updated to reflect that they were not involved, and to correct the initial spelling of Wyatt Phillips’ name.