The Hawkeyes have won one of their last 14 contests heading into the final three matches of the season. 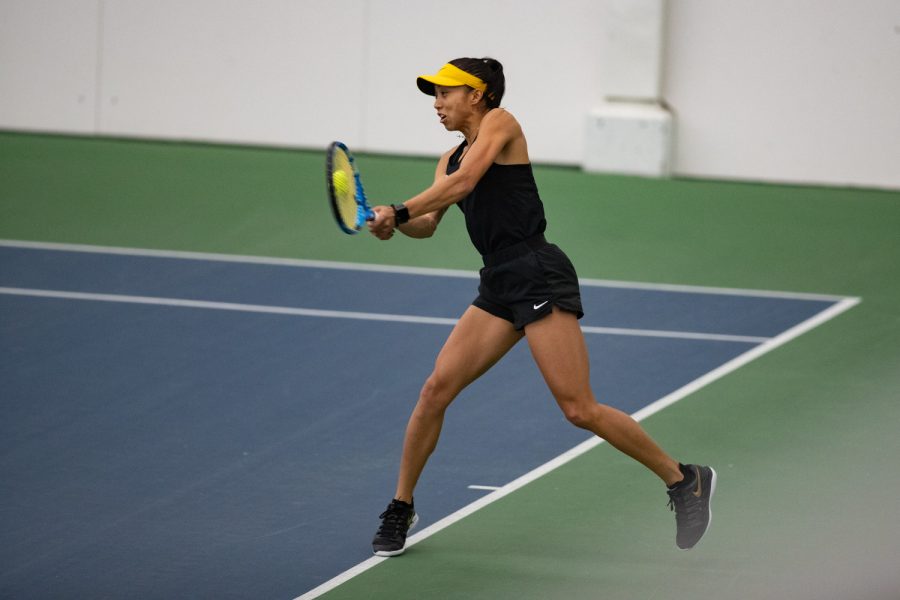 Iowa’s Michelle Bacalla defends her side of the court during a women’s tennis meet between Iowa and Illinois at the Hawkeye Tennis & Recreation Complex on Friday, April 1, 2022. Bacalla lost her match, 2-1. The Illini defeated the Hawkeyes, 4-2.

Iowa women’s tennis will travel to East Lansing, Michigan, to face Michigan State on Thursday at 4 p.m. at the MSU Indoor Tennis Facility. The Spartans are 9-9 overall and 1-6 in Big Ten Conference play this season, riding a six-match losing skid.

Iowa will then host Michigan on Sunday at the Hawkeye Tennis and Recreation Complex for its final home match of the spring season. The match begins at 11 a.m. The Wolverines hold a 12-5 overall record this season going into the match and are 6-1 in Big Ten matches.

Iowa seniors Michelle Bacalla and Samantha Gillas will be honored on Sunday as they play in the final home match of their career.

Iowa is coming off a 4-1 victory against Rutgers last Sunday, which helped snap its 13-game losing streak. The losing streak was the longest in Hawkeye women’s tennis history.

“Yeah, I mean, obviously we were just really tired of being short [of winning matches],” Iowa women’s tennis head coach Sasha Schmid said. “So, I think that was great to feel like they could have a good feeling walking away from that for the first time in a long time … every match has been really competitive and close in a different way, a few points here and there, honestly.”

Schmid had been experimenting with different singles and doubles lineups throughout the 13-match losing streak. Despite the recent victory for the Hawkeyes, Schmid is still planning to mix up the singles lineup.

But she’s confident in her doubles lineup, with the pairs of Gillas-Samantha Mannix, Marisa Schmidt-Vipasha Mehra, and Barbora Pokorna-Bacalla.

“We’re not totally sure on a few spots for singles, but I think we’ll stick with that doubles lineup,” Schmid said.

At 5-14 overall and 1-7 in Big Ten play, Iowa has three total matches left in the regular season. Following matches against Michigan State and Michigan, Iowa will take on Nebraska on the road for the final match of the regular season.

The Hawkeyes will host the Big Ten Tournament in Iowa City from April 27-May 1.

“It would really benefit us if we can build upon that now,” Schmid said. “So, we’ve got three more matches to play and then the Big Ten Tournament, so I’m really hoping that we can galvanize a little bit of momentum here.”

Pokorna, a freshman from the Czech Republic, currently leads the Hawkeyes in singles wins. She holds a team-best 11-4 record and .733-win percentage in 2022.

Pokorna has won five of her last six matches, despite being placed in four different singles spot seedings.

“[Pokorna] has had a great freshman year,” Schmid said. “She’s been really consistent and a great competitor. Mentally, she’s a very solid competitor through any sort of adversity that came to place in the match and I think she’s just been really able to grow the season. I find a lot of confidence started a little lower in the lineup, and I think that probably helped her with just building on some good wins early that gave her confidence.”