University of Iowa MFA student Abigail Colemen didn’t set out to become a costume designer, but loves her job at the UI nonetheless. Her career began at a small community theater in North Carolina and has taken her to the UI Theatre Department. 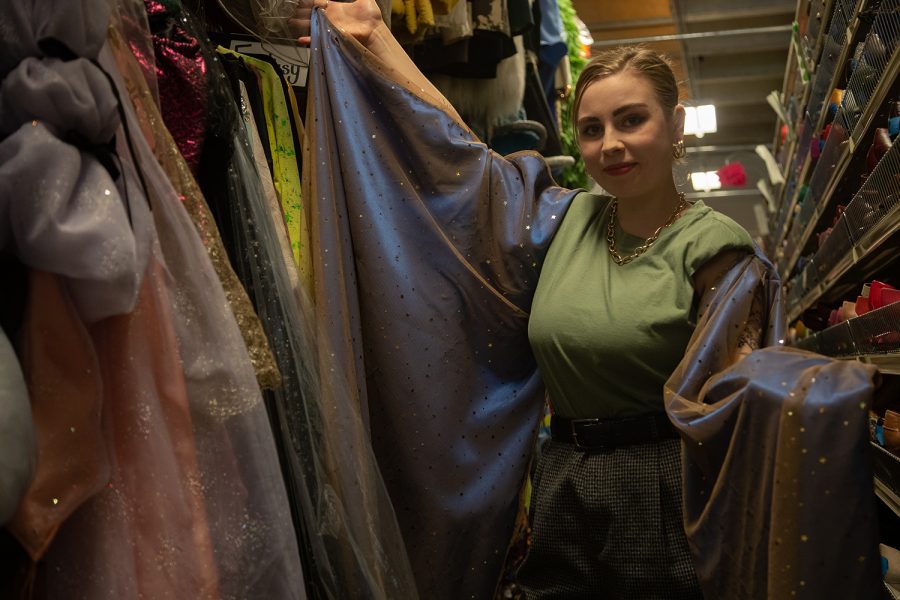 Graduate student and costume designer Abigail Coleman poses for a portrait in the costume storage room in the Old Museum of Art on Sunday, April 10, 2022.

The star stands dead center, all eyes locked on them. Weeks of preparation have led up to this moment, with the cast and crew stretching themselves to account for every detail — so that every button on the lead’s bodice has been sewn with care and consideration.

Without a costume designer, characters would lack the visual rhetoric viewers have learned to expect — and characters would be left standing lackluster, in ordinary frocks and boring colors.

MFA student Abigail Mansfield Coleman was the costume designer for the University of Iowa’s recent production of String, and several other theater productions. Coleman has designed costumes for countless shows in a wide variety of genres over her career, once even designing puppets for a show.

When designing costumes, Coleman first considers the story. Specifically, she reads over the script in order to understand the plot. Then, she reads it over again, and considers each character’s voice as well as the time period and setting.

“After I do that the first time, I make a list of like, ‘OK, this is what I thought and felt when I was reading these things,’ like, ‘This character definitely feels like a more maternal character. So how do I show that in their costume?’” Coleman said.

She then discusses her thoughts and feelings with the production’s director, who gets the final say on any creative choices. For example, Coleman said, they may be doing a Shakespearean play, but if the director wants it set in space, then Coleman must account for that.

Of course, she’s never one to stray from a challenge.

“I’m a big texture person, and I love to like mix patterns and textures on stage, which is harder in a space in a really large proscenium space,” Coleman said. “But I like the challenge of that and trying to make sure that the back row can like see as much of this detail and texture as I do when I’m working on the costume.”

She utilized her love of texture and patterns in the musical ‘String,’ for which she bedazzled a blazer, and draped a paper clip tank top over a patchwork shirt.

Coleman became involved in theater by chance — her younger sister wanted to go to a theater camp, and their mom didn’t want to send her youngest daughter alone. Coleman accompanied her, and by happenstance, found a love for theater and the arts.

When Coleman turned 16, she became involved with her local community theater, the Little Theatre of Gastonia, in Gastonia, NC  — once again, entirely by chance.

“I went there one day to borrow something or to speak to somebody. And there was another high school, a local high school student there who was asking about an internship and the possibility of working with them as a community service project,” Coleman said. “I was like, ‘Oh, could I do that too?’ and they were like, ‘Yeah, sure.’”

Her community theater had a very large costume shop, considering the size of the venue, where Coleman said it was efficiently run by five women who began to teach Coleman the trade, beginning with skills such as sewing and working with a low budget.

Coleman worked eight to 10 hours a week and continued that job throughout the remainder of high school. As an undergraduate student at Shorter University in Rome, GA, she decided to major in musical theater. She received work-study positions and assisted at design shows.

However, it wasn’t until her senior year that she truly committed to costume design as a career.

“I was like, ‘You know what? I actually like [costume design] a whole lot better than acting or like singing or dancing,’” Coleman said. “I decided that I wanted to pursue that, and I’ve been doing that ever since.”

Since then, Coleman’s career has flourished, and she can proudly say she loves her job. She reflects on how String, a musical recently conducted by the UI Theatre Department, was a particularly enjoyable project.

“I really like the freedom of having the most fantastical shows,” she said. “To sort of set [the characters] apart, I just rhinestoned them, and had them in really bright colors and like vibrant colors that were different from the other ensemble members that were on stage.”

The freedom provided to her by more imaginative shows is her favorite, such as the case with String. She’s also challenged herself to grow as an artist, as is the case with her puppeteering career, which is a recent development within her life.

“I helped build Children of Eden, which is a musical about the biblical creation story, and then in act one and act two it’s about the story of Noah’s ark,” Coleman said. “There were giraffes that were made out of these really tall like umbrella stands that were sort of pieced together with like hot glue twine and zip ties.”

Generation Candyland: A Fable is another UI theater project that required Coleman to stretch her abilities last year. She was faced with the challenge of creating a wendigo, a large fictional creature said to be an omen of death.

“The wendigo was like a headpiece that had like a long drapey body that this actor carried and on a big old pole way, way taller than her,” she said. “I think we measured him at like at least eight feet and a couple of inches and she could kind of hold him higher than that if she wanted to, as well.”

Although it mainly takes place behind the scenes, costume designers’ work is ever-present on stage. Coleman is a prime example, as a costume designer, and puppeteer who puts passion behind every stitch.