University of Iowa Green Bandana Project steps up to the plate

The Green Bandana Project, an organization dedicated to increasing mental health awareness on college campuses, held its first in-person event this semester to reconnect with the University of Iowa campus after the COVID-19 pandemic. 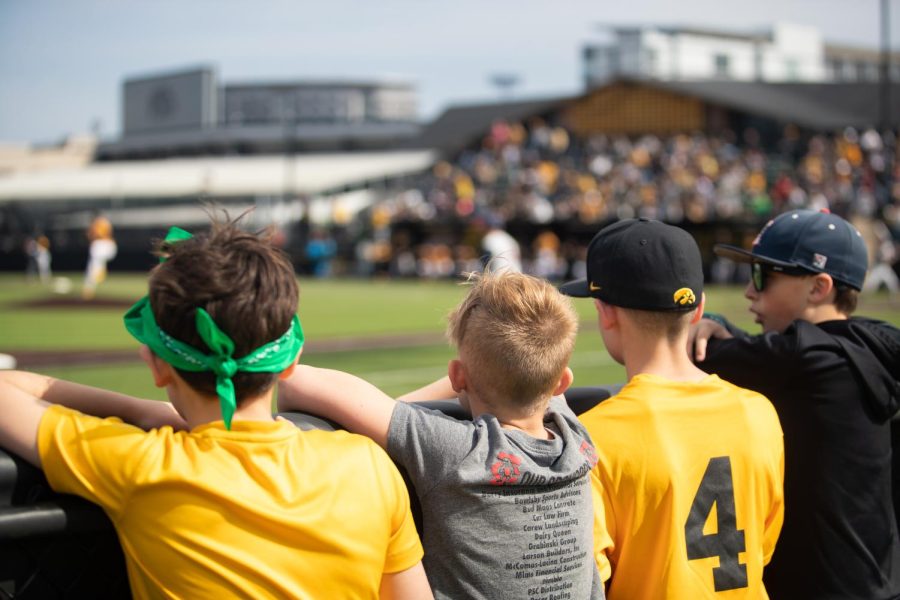 A fan wearing a green bandana watches a baseball game on Sunday, April 10, 2022.

The University of Iowa Green Bandana Project is seeking to reconnect students on campus through events held during the spring semester.

The UI Green Bandana Project began at the University of Wisconsin-Madison in 2016, with the goal to increase mental health awareness on college campuses.

The University of Iowa Undergraduate Student Government and the foundation of events management class implemented the Green Bandana Project in 2020.

“The whole purpose of it is anybody who’s involved with Green Bandana, or who wants to spread awareness about resources on campus, wraps a green bandana on their bookbag,” Ryan Dee, a UI fourth-year student and Green Bandana member, said.

He said the bandana shows that you are a resource for those who need it.

“It signifies that you’re a person that they could talk to about mental health issues, and be there for them,” Dee said.

The UI Event Management Program is how Dee got involved with the Green Bandana Project.

“The Event Management Program puts on events for Green Bandana throughout the semester, in order to create a safe space for students to come and know that there are peers on campus,” Dee said.

Green Bandana has planned three major events for this semester. The first was a partnership with the UI athletics department to sponsor the baseball and softball game on Sunday.

The chapter had representatives throw the first pitch, host a table at the event, and had mental health facts shared between innings, Dee said. The other events will happen later in the semester.

Tracy Hufford, a lecturer for the foundations of event management class that creates events for Green Bandana, said a now-graduated student brought the Green Bandana Project to the UI.

“We were talking about projects because we always do a project in this class, an event, and someone said at the end of the semester, ‘Hey, I heard of this thing called the Green Bandana Project.’”

Hufford said she knew it was something students would care about.

“I knew that the students would be engaged because it was about them and for them,” she said.

Dee said the COVID-19 pandemic impacted the types of events and the amount of interaction the Green Bandana Project had with students.

“The past semesters were doing virtual events, and they were doing more outdoor events which are COVID safe events,” he said.

Hufford said while the Green Bandana Project is campus-focused, there is some community outreach that takes place.

The community outreach has been provided by Rosanne Hopson, a philanthropist involved with many community organizations.

“I have a few groups within the community that I belong to that I have been able to kind of interweave the two,” Hopson said. “One group, in particular, is 100+ Women Who Care, and her [Tracy’s] students came and talked to our group, that was a big chunk of the community that got educated about what was going on, on campus.”

“We met with her all summer, and now West High has a Green Bandana,” Hufford said.

“We’re gonna have a bags tournament at Big Grove for the whole Iowa City community to come and play bags, and they’re providing food for the event,” he said. “And then the third event is May 4, they’re doing a Star Wars-themed night yoga session on Hubbard Park.”

Hufford said the class this semester wants to expand the involvement of the Green Bandana on campus.

“They’d like to start a student organization for the Green Bandanna Project so it can live outside of just my class,” she said. “We’re in the process of seeing if we can form that if the USG gives us permission to do that because we’ve been working with them.”

Dee said it is important to increase the involvement of the project on campus by expanding into a student organization.

“It’s really important to be able to be connected with a group of people who understand what it’s like being a college student during COVID,” Dee said. “Just being a college student in general, the stresses that go with that, so I think being a part of the organization means that you’re open to having those discussions and being there for others who need it.”