The UI’s 10-year master plan includes the modernization of MacLean Hall, which houses the math department. While renovations are underway, the department will move to Jessup Hall. 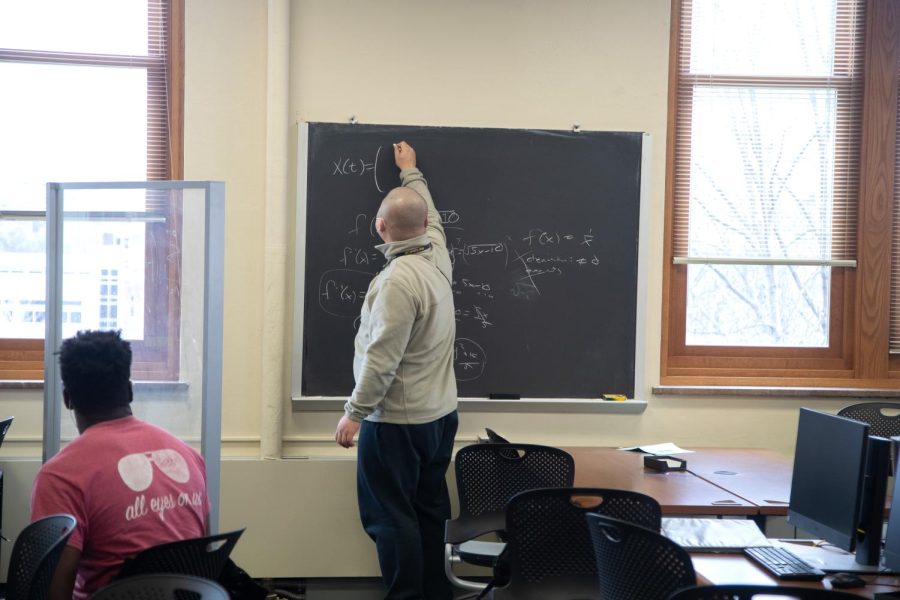 University of Iowa students study in the Math Tutorial Lab at MacLean Hall on Thursday, March 31, 2022.

The University of Iowa mathematics department will move to Jessup Hall when modernization begins in MacLean Hall within the next decade.

MacLean Hall has housed the mathematics department for over 75 years. The construction in the building is raising questions and worries about where the program will end up during the modernization.

The master plan includes the modernization of MacLean Hall along with Jessup Hall and MacBride Hall over the next decade. According to the preliminary draft of the plan presented to the state Board of Regents on Jan. 12, Maclean Hall will be the first of the Pentacrest buildings to be modernized.

UI math professor Bruce Ayati said he is worried about how the construction could impact student learning.

“We’re one of the most undergraduate-facing departments, possibly on campus, and the concern is when we heard [modernization] was happening, the temporary solutions might be quite damaging, particularly to deliver instruction to the undergraduate level,” Ayati said.

Ayati said that, as of March 25, the math department had not been consulted about the planning of where to put the program during modernization. He said he thinks the UI could benefit from involving the department, as they can explain the specific spacial needs the department has.

UI Director of Campus Planning, Joe Bilotta, said in a UI Faculty Senate meeting on March 22 that the math department has not received much information about the plan because there is not a lot known about the proceedings yet.

“We haven’t started the process,” Bilotta said. “The only thing that we have committed to is that we need to have math on the Pentacrest at all times.”

At the time of the meeting, Bilotta said the university was exploring the concept of moving the department into Jessup Hall.

“We haven’t started working with the college or the departments yet on all the details, what we have to be concerned with and sensitive to as we prepare for McLean,” Bilotta said.

Bilotta said at the meeting that there will be communication in the weeks following the move.

Jeneane Beck, UI assistant vice president for external relations, wrote in an April 2 email to The Daily Iowan that the math department’s future location was discussed with Department Executive Officers in December 2021.

She wrote that the 10-year plan is subject to change over time, but the current plan is to move the math department into a modernized Jessup Hall.

“The computer sciences department has grown substantially over the past 20 years, and as a result the two programs can no longer comfortably share their current space,” Beck wrote. “This will ensure both programs remain centrally located and have the necessary classroom and lab space their programs deserve.”

UI Associate Dean for Research Josh Weiner, wrote in an April 2 email to the DI that the math department has been notified of its planned location.

“As the ten-year master plan was being put forward for approval last fall, I had several email exchanges about the Pentacrest Modernization project with the Mathematics DEO,” he wrote.

He wrote that throughout the fall, he updated the department’s executive officer on information from Campus Planning.

“Once the current plan, which has Math moving to a modernized Jessup Hall on the Pentacrest, was clear, I met with the DEO in early December to convey this information and to ask him to inform his faculty. Since then, we’ve been in touch a few more times as well,” Weiner wrote.

As of an April 2 email, Ayati wrote there has been no conversation with the math department as a whole about the new location.

Ayati personally is worried about the department being placed in a space that is not suitable for their instruction for too long of a time and the potential for funding to be stalled, he said.

“One of the fears that we had was to be put in some space that really is not appropriate for our mission, and it would become permanent or very long term at least five to 10 years, while the money is being found for whatever comes next,” Ayati said.

Another concern of Ayati’s is how the university will replicate the office space and the Math Tutorial Lab that MacLean Hall has that both contribute to student learning.

“Having space for things like our Math Tutorial Lab is a huge part of how we execute our mission…we don’t have a math tutorial lab, it fundamentally alters how we deliver instruction,” Ayati said.

UI first-year student Elizabeth Page said she goes to the Math Lab at least three times a week for help with her Calculus II course. Page said she likes the space because it allows her to go in with friends, work on homework, and get immediate help when needed.

“Once you’re done with your question, you just go on and keep working and it’s super nice because they have chalkboards everywhere,” Page said.

Page said the potential for the Math Tutorial Lab to move worries her, as she knows she will need to use it in the future if she takes more math classes at the UI.

“Ideally, if there was more open space, I think that would work better so people are able to work on different things and with other people without having to worry about space as a restraint,” she said.