The 26th Annual University of Iowa Powwow, a cultural reconnect after two years

The 26th Annual University of Iowa Powwow, hosted by the Native American Student Association, returned to campus after two years. 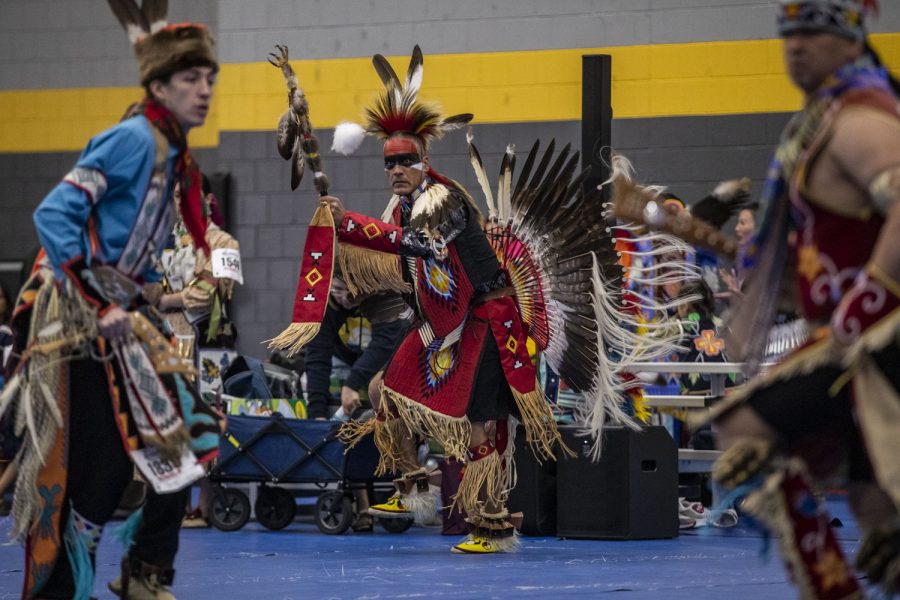 52-year-old attendee Tim Livingston, whose tribal affiliation is the Klamath Tribe from Oregon, performs during the 26th Annual University of Iowa Powwow at the Field House in Iowa City on Saturday, April 2, 2022. This is the second UI Powwow Livingston has attended.

The 26th Annual University of Iowa Powwow brought generations together as Native American community members congregated at the Field House on Saturday.

Dominique Badajoz, a non-enrolled citizen of the Meskwaki Nation and the UI Powwow committee chair, said the turnout was perfect for what the committee was expecting. There were about 460 attendants at this year’s event.

“We kind of set up last night around 5 p.m. and then got all the tables and chairs to where we wanted,” Badajoz said. “We did have a few hiccups but literally minor ones. We were able to fix them, and everything has been going to plan ever since, it’s been really nice.”

The event commenced with a Grand Entry which is a favorite event among many who attended, like Darcy Spears, who is enrolled in the Red Lake Nation Band of Chippewa Indians in Northern Minnesota.

“I love Grand Entry just because that’s when everyone is coming in and we’re coming together and then that’s when we actually get to see people because we tend to come from different areas in the country,” she said.

Participants in the 26th Annual UI Powwow gathered in the center of the Field House behind the Color Guard. The participants, clad in their colorful regalia, began dancing once they crossed the threshold of the circle outlined with small bleachers full of audience members.

Spears was a participant in the Adult Women Jingle Dance category. She said the Jingle Dance is a healing dance.

“I really dance for people who can’t dance and [I] dance for my parents,” Spears said. “I tend to dance for others.”

The regalia that Spears donned during the Jingle Dance has metal cones attached meant to mimic tobacco can lids, she said.

“Originally they were bones and then they went to like Snuff can lids, tobacco can lids, and now you can order them from Native American stores,” she said.

“She loves to dance,” Alvarez-White said. “Her grandma and her work on her outfit a lot.”

Tim Livingston, whose tribal affiliation is the Klamath Tribe from Oregon, is a vendor and a participant in the Men’s Traditional Dance. He said it feels good to dance again, as the UI

Powwow was his first powwow since COVID-19 started.

“I can tell I’m out of shape,” he said. “Just kind of gives you an idea of what you need to do to get better when you get to the next one.”

Alicia Velasquez, who is Pascua Yaqui Tribe of Arizona, was also a vendor at the event. She said she grew up attending powwows but this is her first time attending one as a vendor. Velasquez is the founder of The House of  DOTŁ’IZHI, a business specializing in beadwork and silversmithing.

Velasquez said she is the first Native American woman to own a business in Iowa City.

“My dad taught me beadwork at a young age and I continue doing those techniques and use them in a modern version,” she said. “Silversmithing is working with pieces using stones like natural turquoise and other stones to create rings, earrings, and things like that. I was taught by other elders in my community on how to keep those traditional techniques alive as well.”

Rebecca Roberts, of the Sac & Fox Tribe of the Mississippi in Iowa, said she attended the UI Powwow as an observer. She said she wanted her three sons to see their heritage.

Roberts said powwows are a way for Native American people to reconnect.

“It’s really important, especially for me, I grew up off the settlement,” she said. “This is a good way for us to reconnect with our heritage and our tribe.”

Powwows are a great way to learn about the culture of Native American people, she said.

“This is just a great way to see our culture and heritage as it was hundreds of years ago,” Roberts said. “It’s very important for the youth to see and learn. Learn the songs, learn the reason why the songs are, and learn the different styles of dancing. Everything has a meaning.”