Owner of La Wine and La Tea, Shanshan Kong, opened La Hair in the Old Capitol Mall on March 1 with the goal of providing affordable hair services specifically for students and international residents. 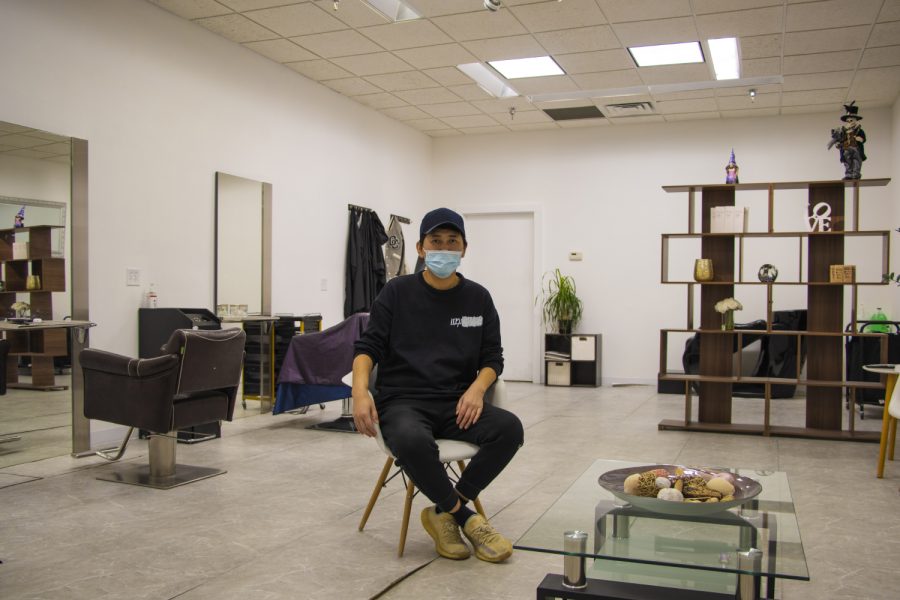 Benson Qiao, one of the owners of La Hair Salon, poses for a portrait in the Old Capitol Mall on Wednesday, March 30, 2022.

A new hair salon and barbershop from the owner of La Tea and La Wine has opened in the Old Capitol Mall.

“Our price is not really high,” she said. “Usually the other stores maybe [charge] around $50 or $60 just for a haircut and we just charge around $40, so I think it’s good for the students.”

Kong said she chose to open the salon in Old Capitol Mall because it has heavy foot traffic and a high volume of students in the area.

Owning four different businesses in Johnson County, Kong said she is familiar with the difficulties of opening a new business that people aren’t familiar with, citing challenges with hiring staffing and getting the La Hair name into the public sphere.

Kong related running La Hair to her experiences opening her restaurant La Wine and bubble tea shop La Tea which were new ideas for Iowa City when they first opened.

“We do real Chinese or Korean or even Japanese food,” she said. “You can get exactly the same food when you’re traveling to China, to Korea, or to Japan.”

This is different from much of the Americanized Asian food found in most of the country, Kong said.

“Because it’s a new concept, I think we need a little bit more time to let the local people know what is the real difference,” she said.

Kong said the business also originated from her friendship with hair designer Benson Qiao. Qiao has worked in the profession for years, Kong said, having owned a salon in China and worked as a hair designer in Manhattan.

Because of hiring difficulties, Qiao is currently the only hair designer working at La Hair. On the bright side, Kong said, he’s extremely talented.

Qiao told The Daily Iowan through a translator that he likes the salon’s space and the Iowa City area.

He said he’s found that customer service is more important in Iowa than it was in Manhattan. Because of Manhattan’s large urban population, he didn’t have to worry as much about retaining customers and could always count on more customers coming in.

Kong said that along with staffing difficulties at La Hair, hiring has also been an issue at La Tea and La Wine.

“We still keep trying,” she said. “And because right now it seems like life is back to normal from [COVID-19]. So we try to rebuild our business. We just keep looking for more people who really want to work with us.”

While La Hair primarily focuses on providing hair services for Asian people, Kong said everyone is welcome to apply and seek their services.

Kong said she will likely be turning her attention to real estate with La Hair’s opening and is planning to build apartments in either Coralville or North Liberty.