For the first time in two years, the annual University of Iowa Powwow hosted by the Native American Student Association is returning to campus. 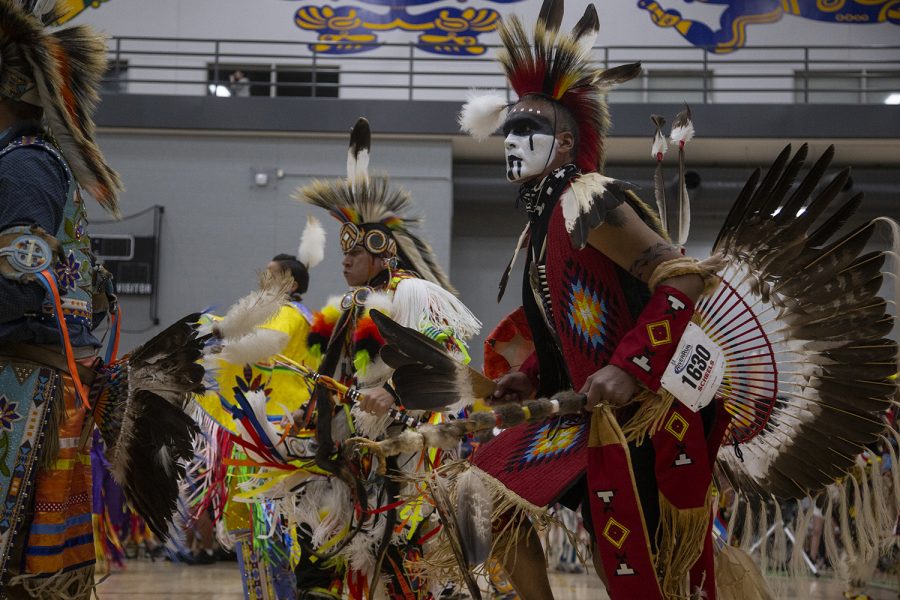 Dancers perform in the grand entrance during the 25th annual University of Iowa Powwow in the Fieldhouse on April 20, 2019. Hosted by the Native American Student Association, participants could buy traditional food and clothing, and sign up to perform traditional song and dance.

After a two-year pause, the annual University of Iowa Powwow hosted by the Native American Student Association is returning to campus. The 26th Annual UI Powwow will take place Saturday, April 2 at the Field House.

Dominique Badajoz, a non-enrolled citizen of the Meskwaki Nation and the Powwow committee chair, said a powwow is a ceremonial event that brings multiple Native nations and community members together.

“We focus on singing, dancing, and usually some of them will have feasts,” she said.

Not every Native nation has powwows, Badajoz said.

“There are some Native nations that will focus on things called potlatches, which is very, very different than powwows,” she said.

Badajoz said the UI Powwow has not been held for two years because of COVID-19 and budgeting.

For many students on campus, the 26th Annual UI Powwow is the first UI Powwow they can attend, like Hunter Wienke who is Anishinaabe from Michigan and the vice president of the Native American Student Association.

Wienke was helping plan the UI Powwow his freshman year when students were sent home because of the pandemic. He is looking forward to the connections he can create at the UI Powwow, he said.

“I’m most looking forward to meeting people,” he said. “The Powwow is our student org’s largest event that draws in the most amount of people.”

Moving toward accomplishing a goal and creating an event has helped motivation among Native American Student Association leadership, Wienke said.

“I think a lot of student orgs experienced participation and interest in events really went down through the pandemic,” he said. “Having this big event and seeing all the interest from social media already, and from just people I’ve been talking to, has been a morale booster for executive leadership to really try and make it the best that we can.”

RELATED: Abigail Buffalo: forming a passion to help others through learning more about Native American experiences

Mary Bennett, a member of the UI Native American Council, said the UI Powwows were originally held in the Field House when they first began.

“They’ve also been held over the Rec Center on the west side, and they’ve also been in Carver-Hawkeye,” she said. “So, it’s really nice to have it back at the Field House because that’s kind of our home turf.”

Bennett has attended powwows as an ally of Native American people for over 20 years.

“What’s really cool to witness is the community building that goes on, the reconnecting of people to their culture, and allowing them to celebrate their heritage and their identity of who they are,” she said.

Cherie Haury-Artz, another member of the UI Native American Council, said they assist the Native American Student Association with setup, equipment, and money handling for the event.

“We all have to have special training, university training in cash handling,” she said.

Badajoz said everyone is welcome to attend the event, however, they are expecting the number of participants and attendance to be lower than usual this year because of COVID-19.

“Obviously due to COVID and due to everything happening, we’re actually looking at it being a lot less than usual,” Badajoz said. “So involved we’re hoping for about 70 people to participate in this. Then for viewers, around 200 is how many will be coming in and out throughout the day.”

Bennett said the UI Powwow is a great learning experience for community members.

“They want to celebrate their heritage and so they’ve invited us into their living room so that we don’t ever feel you’re not welcome,” she said. “That would be my message to everyone. Native and non-Native. Everyone on campus should join in this pleasurable experience and it’s a wonderful learning opportunity.”