The University of Iowa’s Undergraduate Student Government voted to renew its support for a sustainability general education course that would be implemented university-wide. 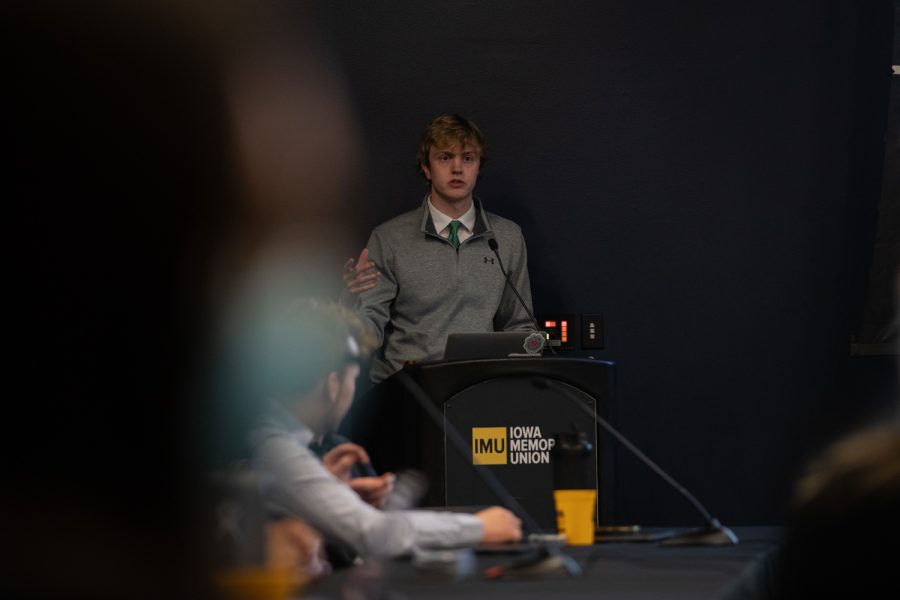 Robert Jepsen speaks about the implementation of a sustainability focused course requirement at the University of Iowa to senators during a University Student Government meeting on Tuesday, March 29, 2022.

All students could be required to take a sustainability general education course after the University of Iowa Undergraduate Student Government renewed its support for adding the requirement on Tuesday.

The resolution was drafted by Sen. Robert Jepsen, who spoke in favor of a sustainability gen-ed requirement in all university colleges. The UI College of Liberal Arts and Sciences is imposing the requirement for all students who enroll in the summer of 2022 onward.

Jepsen said he spoke with the deans of various colleges, and they expressed general support for the new requirement, but he clarified the deans alone do not set the education requirements.

He provided examples of how other senators can advocate for a sustainability-focused curriculum.

“No matter what college it is, you can tie sustainability really easily,” Jepsen said. “I’m a business student, and obviously a lot of business is efficiency and a lot of that is sustainable practices.”

USG President Regan Smock said there are still logistical questions to be answered because the sustainability gen-ed overlaps with arts and humanities and social sciences in the College of Liberal Arts and Sciences.

“We really have to think about sustainability as more than just a hard science,” Smock said. “I do think it’s something that needs to be re-brought up and reintroduced [in the other colleges.]”

The overlapping nature of the sustainability gen-ed was imposed because the university is hesitant to add additional credit hours to the graduation requirements, Smock said.

Sen. Samantha Stucky voiced her support for the bill, and said it’s been a long time coming.

“I know some other colleges at the University of Iowa are in the process of creating and implementing this, so it’s not impossible by any means,” Stucky said.

Sen. Joshua Brown’s unanimously-approved amendment proposed sending the passed and presidentially-signed resolution to the deans of the colleges. He said it would be a reminder of USG’s advocacy for the new gen-ed.

“We don’t [want to] get the resolution stuck in the echo chamber of student government,” Brown said.