Though the Iowa men’s and women’s basketball teams already eliminated from the NCAA Tournament, Iowa City bars are experiencing an increase in customers. 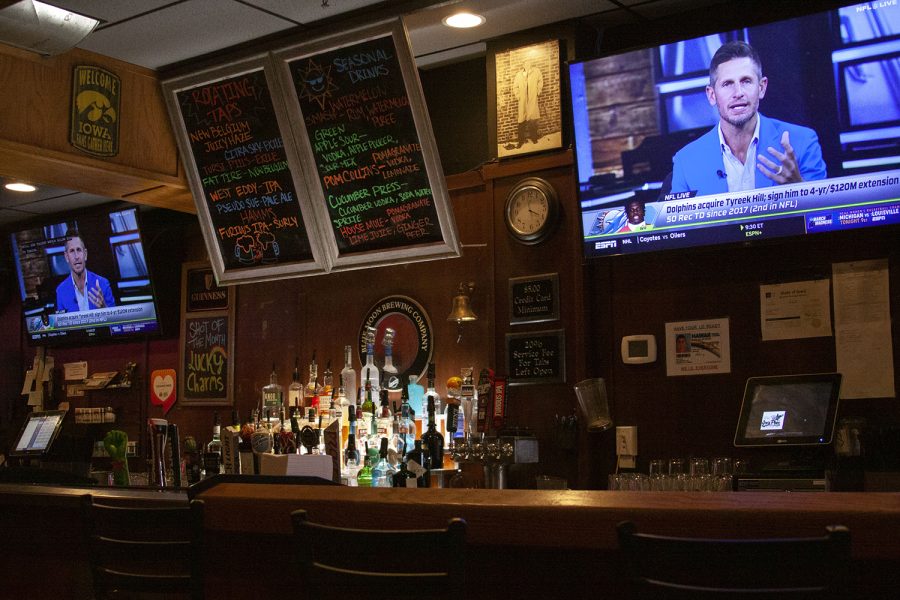 The inside of Joe’s Place is seen in Iowa City Monday, March 28, 2022. (Dimia Burrell/The Daily Iowan)

Iowa City sports bars are getting increased business as the NCAA March Madness Tournament enters the Final Four, despite the Iowa men’s and women’s teams exiting “The Big Dance” early.

Stacey Gonzalez, manager of the downtown bar Joe’s Place, said customers are coming into the business earlier in the day and in larger numbers than usual.

“Yesterday was super busy,” she said on March 26. Iowa State and Miami were among the teams playing on March 25. “We didn’t even have the new side of the bar open, and we needed it to be open, because we were packed all day.”

Joe’s Place has scheduled more staff during daylight hours because of the increased volume of customers, Gonzalez said.

“Usually, we have a bartender and a server [during the day],” she said. “And then during the games, we try to do a bartender, a barback, a server, and then maybe someone on call.”

More people have been coming to the bar in groups since the start of the tournament, she said, and she can tell the groups are coming specifically for the games because of the increased number of TV channel change requests.

Connor Delaney, a University of Iowa senior, said he’s been regularly going to bars to watch games even after both the Hawkeye men’s and women’s teams were eliminated earlier this month.

“If Iowa was in the Elite Eight –– I’ve been here for four years — so I know it would be super, super crowded,” he said.

Delaney said he has about 20 different brackets for the tournament filled out giving him more incentive to track the games.

A 2015 study from Nielsen, a television ratings company, found that people who filled out brackets on websites and mobile apps watched 20 percent more tournament games than those who didn’t.

The Economist wrote that over 35 million people filled out NCAA Tournament brackets in 2022. According to the American Gaming Association, 45 million people are expected to place bets by the end of the tournament, a total of $3.1 billion.

Benjamin Sabbione, a security guard and barback at DC’s Sports Bar, said the NCAA Tournament has also made the local bar’s business pick up.

“It usually is busy around 9 p.m. or 10 p.m.,” he said. “That’s when people will start coming in. But because of the games going on at two or three in the afternoon, it starts to pick up a lot earlier.”

Sabbione said brackets and betting have played a part in this. He said while crowds would be expected to drop after the Iowa men’s and women’s basketball teams were eliminated, it hasn’t had much of an effect on DC’s.

“I think people still love March Madness, so they’re still going to come out to watch the game[s] no matter what,” he said. “And some people usually bet too. So, that’s another reason for people to come out.”