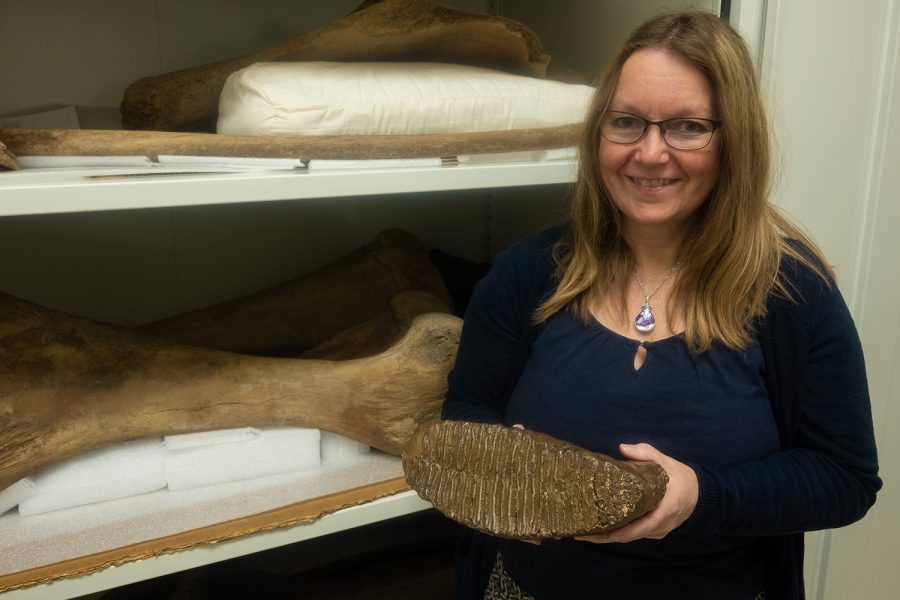 Tiffany Adrain poses in the Paleontology Repository with a woolly mammoth’s molar tooth which was discovered in 1912 by A.O. Thomas on Monday, March 28, 2022.

A construction worker in Northwest Iowa discovered something unexpected among the rocks during an excavation earlier this month — a woolly mammoth tooth.

Tiffany Adrain, a University of Iowa fossil expert confirmed the authenticity of the tooth after its discovery in Sheldon.

Adrain, department of earth and environmental sciences special collections manager, was asked by the construction company to verify that the rock mass was a woolly mammoth tooth, which dates to the last ice age.

“I just saw photographs, but you could tell right away that it was a mammoth tooth,” Adrain said. “They’re very easy to identify.”

While excavating a construction site on a property owned by the Northwest Iowa Community College in Sheldon, Justin Blauwet noticed something in the dirt that didn’t look like an ordinary chunk of rock. Blauwet realized he had stumbled upon a woolly mammoth tooth.

“It was just laying right there on top, half covered in dirt,” Blauwet said. “I started to kind of walk by it, but then I thought I would look again, and I was pretty sure it was a mammoth tooth.”

His first plan of action was to make sure he found what he really thought he did.

“I ran back to my truck and Googled it quick to confirm, and that’s what it was,” he said.

Blauwet said he spent a lot of time watching the Discovery Channel with his two young sons but was unsure of how to preserve the tooth or where to take it. He turned to the construction company’s project engineer for what to do next.

Adrain said when people stumble upon something like a fossil, they look for a place to call. For most of the discoveries in Iowa, the UI is their first stop.

“There’s a large group of us on campus that identify stuff,” she said. “People will think they found a meteorite or a dinosaur or really cool Paleoindian material.”

Although the fossil did belong to a woolly mammoth, Widga said it’s hard to identify the height, weight, and overall size of the animal because all the researchers recovered was the tooth.

“We’re kind of stuck with averages,” he said. “Mammoths are usually 10 feet tall to the shoulder and weigh about six or seven tons. They’re elephant sized.”

The mammoth tooth was not the biggest he’d seen, he said, but also not the smallest. He said the best way to find the measurements of a mammoth is using their long bones, like the humerus or skull.

Adrain said this kind of finding is generally common in Iowa. The fossils can date back to thousands of years ago when these species walked the Earth during the ice age.

Most of her work has to do with examining “funny shaped rocks,” Adrain said. Every so often, she said she gets an email or a phone call asking for identification.

“Eight times out of 10, it’s a rock, and the other few times, it’s something really cool,” Adrain said.

The collection at the UI has some very interesting pieces and it’s growing quickly, she said. Some of the pieces have yet to be identified, including some potentially new species no one has seen before.

“There’s quite a lot of natural history stuff that comes our way,” Adrain said.