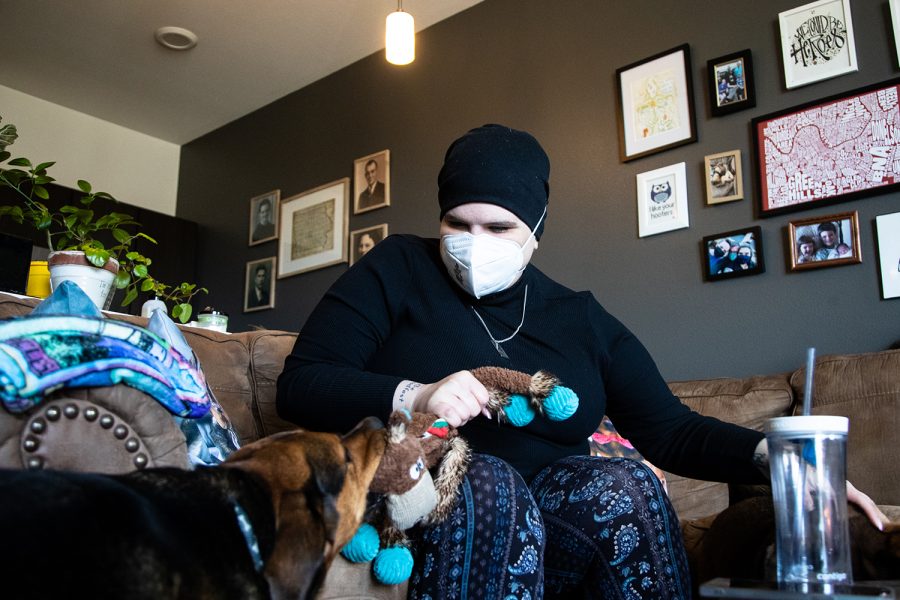 Maryanne Dyer poses for a portrait in her apartment in Des Moines, Iowa on Saturday, March 26, 2022. Dyer is currently in remission after being diagnosed with leukemia June 2021.

As much of the public returns to normalcy during the current dip in cases, many people with compromised immune systems remain just as wary of COVID-19 as ever.

As much of the public has returned to crowded restaurants, movie theaters, amid lower COVID-19 cases and relaxed guidelines from federal health officials, many immunocompromised people still grapple with high risk.

According to Johns Hopkins Bloomberg School of Public Health, 5 to 7 million people in the U.S. have compromised immune systems, leaving many at a greater risk if they contract the virus.

Marion resident Sandy Anderson, 78, was diagnosed with chronic lymphocytic leukemia in February 2021. She said before the pandemic began, she and her husband, who is immunocompromised because of rheumatoid arthritis, were out and about all the time.

Now, Anderson and her husband order all their groceries online, pick up orders from restaurants, and order all other essential items on Amazon, she said.

“It bothers me to go out when I see people without masks, because I guess I wonder, ‘Is this person that’s next to me vaccinated? Are they not?’” she said. “… But I don’t think that we can keep on living in a bubble either. People have to try and get back to some sort of normalcy.”

Anderson said despite their conditions, she and her husband have gone out in public on a few occasions since the beginning of the pandemic, including a meeting of the Eastern Star group, a Masonic organization, and their son’s initiation into the organization.

Despite going into the public more often than she did early in the pandemic, Anderson said she doesn’t necessarily feel safer than before.

Maryanne Dyer, a Des Moines resident who was diagnosed with acute myeloid leukemia in June 2021, said because of her diagnosis, she had to receive stem cell treatments, which have helped her overall wellbeing but further compromised her immune system.

When a patient receives a stem cell transplant, it “basically wipes everything out,” Dyer said.  Because of this, she must get all the vaccines she received as a child, like chickenpox and MMR, a second time.

Dyer also has to restart her COVID-19 vaccination cycle, though she was vaccinated in early 2021.

“My stem cell transplant was in October, so that means my immune system is more or less six months old,” she said.

Dyer was cleared to start receiving vaccines less than a month ago. In that time, she has received the flu vaccine, one dose of the Pfizer COVID-19 vaccine, and Evusheld, a COVID-19 prevention therapy for people with compromised immune systems.

Dyer said she feels more could be done by those in positions of power to prevent the spread of COVID-19, adding that she doesn’t appreciate that people have turned it into a talking point regarding freedom.

As cases and hospitalizations continue falling, other states are paring back their pandemic measures, with Hawaii becoming the last state to end its mask mandate on March 25. Sam Hutchinson, a Portland, Oregon, resident who is in a Facebook group for immunocompromised people with Dyer, has dealt with kidney failure and takes immunosuppressants to combat it, he said.

He said he feels like immunocompromised people haven’t been fully considered as the public returns to normal.

“I just want to be acknowledged for the struggles we’re having and for somebody to take a serious thought of what can be done to help us,” he said. “I’m not a fan of the dismissive, ‘We care about you, but just wear masks, you’ll be okay.’ Again, that’s not reassuring.”

Hutchinson lives with his wife and their two kids, who are 7 and 12 years old. Oregon kept K-12 classes online until March 2021.

With this, Hutchinson and his wife had to make a decision about letting their kids go to in-person classes. They ultimately decided to let their kids go back to school in person, he said, because of the difficulties they faced with online classes.

“After the first three weeks of them being in school, it felt like they’d learned more than they had the entire year of remote learning,” Hutchinson said.

Hutchinson said the pandemic has kept him from pastimes such as traveling around Oregon, and going to the zoo or the beach with his family.

Despite his condition, he said has started going to watch Portland’s hockey team again.

“I double mask, which is super uncomfortable, but I deal with it,” he said.