The Hawkeyes are 4-9 overall this season. They've dropped each of their last eight duals. 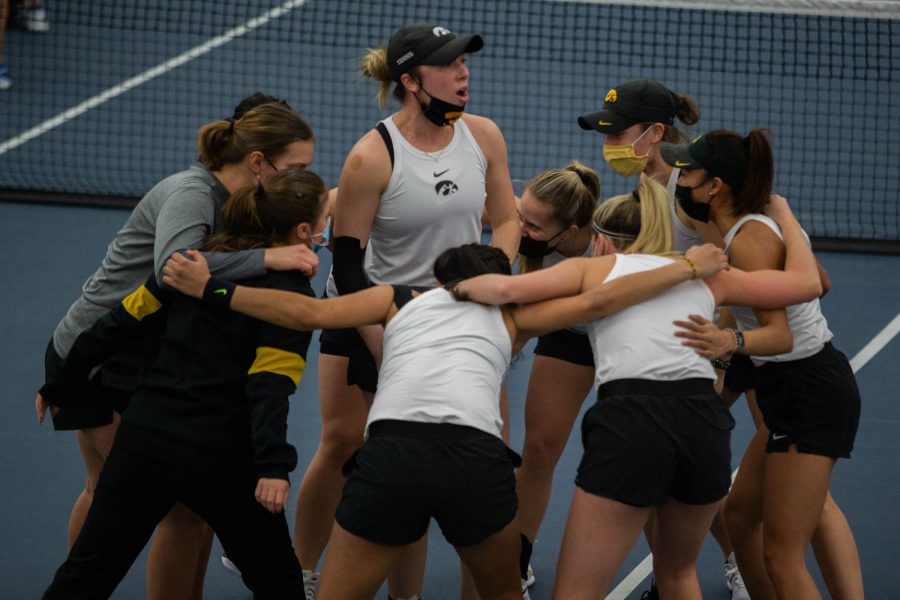 Iowa's Samantha Mannix leads the team in a cheer before an Iowa women's tennis match against Penn State. The Hawkeyes topped Penn State 5-2, making it their fifth straight win of the season.

The Iowa women’s tennis team will travel to the Hoosier State this weekend for matchups with Indiana and Purdue.

The 4-9 Hawkeyes will take on the 7-8 Indiana Hoosiers at 10 a.m. on Saturday morning at the IU Tennis Center in Bloomington. The Hoosiers are 0-2 in Big Ten Conference play this year.

Iowa and Purdue will meet at the Schwartz Tennis Center in West Lafayette at 11 a.m. on Sunday. The Boilermakers boast 9-5 overall and 1-1 league records this season.

Indiana has struggled of late, dropping five of its last six matches.

Iowa freshman Marissa Schmidt is slated to battle Schneider and Fodor on Friday and Saturday, respectively. Schmidt has amassed six singles wins this season.  Freshman Barbora Pokorna is the only Hawkeye with more wins than Schmidt in 2021-22. Pokorna has won seven matches this year.

Iowa has lost its last eight duals. The winless streak is the longest the Hawkeyes have fought through since 2008-09. The Hawkeyes finished the 2008-09 season with a 7-15 overall record.

Iowa’s most recent win came on Feb. 15. The Hawkeyes beat the Missouri Tigers, 5-3, at the Hawkeye Tennis and Recreation Complex that day.

The Hawkeyes are 0-3 against Big Ten teams this season. Iowa has lost to Minnesota, Ohio State, and Penn State since March 7.

Iowa has been without reigning Big Ten Player of the Year Alexa Noel all season. In a now-deleted Instagram post, Noel announced that she underwent successful surgery.

Per a University of Miami press release, Noel will play for the Hurricane women’s tennis team in 2022-23.

Iowa will wrap up its 2021-22 regular season campaign on April 23 with a matchup against Nebraska in Lincoln.