A Hawk Alert was issued at 1:20 p.m. on Thursday, warning students of a strong gas smell. UI Public Safety employees and the Iowa City Fire Department were on the scene. 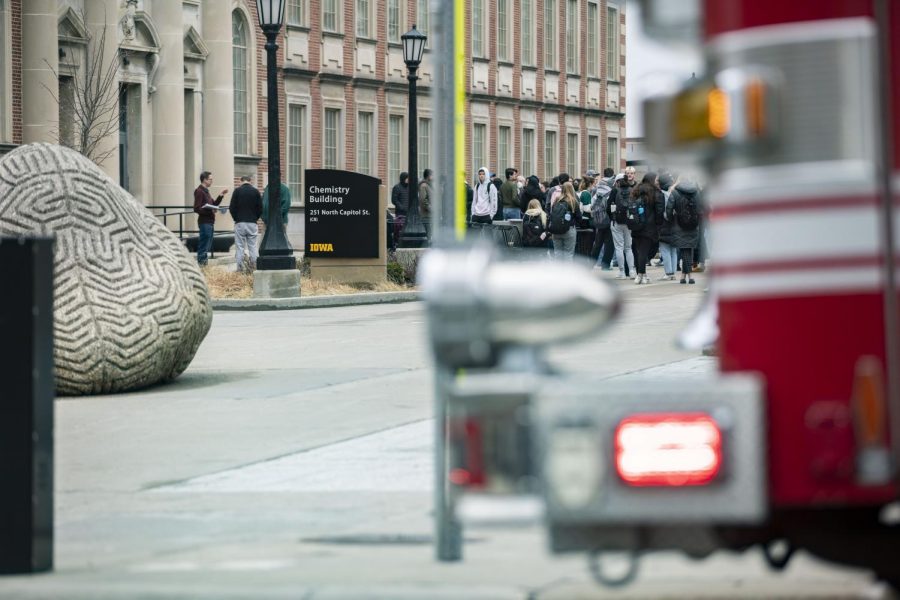 Students and faculty stand outside of the University of Iowa Chemistry Building while first responders investigate a “strong smell of gas” coming from the building according to a University Hawk Alert on Thursday, March 24, 2022. According to a later Hawk Alert, the situation was resolved.

The University of Iowa Public Safety Department reported a strong smell of gas at the UI Chemistry building on Thursday afternoon, causing students and faculty to evacuate the building.

At 2 p.m., another Hawk Alert said the incident had been resolved.

Bruce McAvoy, fire safety coordinator for UI Public Safety, said the department evacuated and set off the alarms after the gas smell was evident upon entering the building.

A Hawk Alert at 1:20 p.m. on Thursday warned students of a strong smell of gas at the building and told people to avoid the area.

He said the fire department went into the building and picked up no signs of harmful gas on their meters. Students were allowed to re-enter the building and continue class after 15 minutes, he said.

“We think it is an external source like a high-pressure relief valve that MidAmerican has around,” McAvoy said. “So if it gets an increased pressure it pops into the atmosphere. And with it being cooler outside, everybody’s asking for hot air and it’s just getting sucked into the H-Vac.”

Emerson Tran Lam, a UI senior studying chemistry, said he didn’t notice the smell until his class started to evacuate.

“Last case, it was just, a cap was left inside of an oven and that set off the smoke alarms,” he said. “We were just working on [a math problem]. Alarm starts going off. We just walk and march on out, notice a smell of a sort of sulfuric or gas leak and walk out those doors.”