Opinion | Now is the perfect time to start cycling

Trends in parking difficulties, gas prices, and climate should make everyone consider cycling more when having to travel around town. 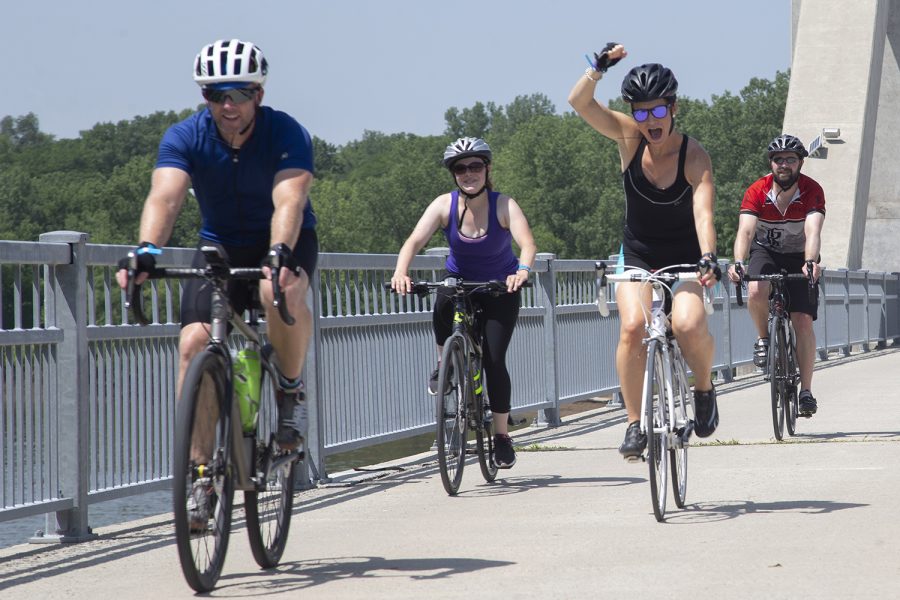 Cyclists ride during the Big Rove bicycle event on Saturday, June 29, 2019. The route, which is part of the RAGBRAI training series, was 36 miles long starting in Iowa City with stops in North Liberty and Solon.

Winter is over, and snow is but a memory. Suffice to say, the weather recently has been much better than weeks past. Days have been mostly sunny, and temperatures were rarely below 50 degrees Fahrenheit during the afternoons, constituting the perfect weather for a jog or some quality time outside.

Because of the warmer climate, getting around Iowa City by bicycle has become a more viable option. With parking problems and rising gas prices, people should bike more, as it is a less costly alternative to using automobiles, and it is better for the environment and personal health.

It would not be revolutionary to claim that parking in Iowa City can be a bit of a hassle. Recently, University of Iowa nursing students were asked about their experiences with parking, and it has not been positive. Their main complaint — and bottom line of the problem — is parking is expensive.

Debby Zumbach, associate vice president of business services and director of parking and transportation, told the Daily Iowan that nothing can be done about that current parking situation.

However, with the change in weather, those expenses can now be avoided by using bicycles, as bike parking on campus is free.

Another expense issue with cars is gas, as prices have been on the rise. Though price averages in Iowa remain below the national average, $3.86 a gallon is still a lot more compared to the pricing of $2.79 a gallon from a year ago. This would obviously not be an issue if one were to cycle instead.

The great weather we have been having and the cost-efficiency of cycling should be enough to convince people to bike more, but there are other benefits aside from general convenience.

Firstly, cycling is better for the environment. Bikes do not release pollutants into the air, and consistent cycling is estimated to prevent 6 to 14 million tons of carbon dioxide emissions from entering the atmosphere every year.

Infrastructure requirements for bikes are minimal, as they do not require the establishment of highways. This means less resources need to be used and less land needs to be urbanized.

Lastly, cycling is better for you. Cycling as a means of transportation will get you where you need to go while providing you with an accessible workout that increases your strength, stamina, and overall fitness.

Additionally, cycling has mental health benefits. Regular cyclists are likely to experience improved moods. To build on this, a study by the Lancet Psychiatry shows that cyclists experience 21.6 percent fewer bad mental health days, suggesting that cycling is beneficial to one’s well-being in more ways than one.

Essentially, there are plenty of reasons why everyone should bike more. Considering that the weather is warmer and automobiles are still a hassle to use in Iowa City, now is as good a time as any to start biking.

Iowa City is a particularly encouraging place to bike. There are signs and lanes everywhere dedicated to making cycling more convenient, and the UI encourages this alternative as well.

If you have an old bike lying around, maybe it is time to start using it. If not, and if you live far away from campus, it might be time to invest in one.