Daily Iowan Sports Editor Austin Hanson breaks down how the 2022 Hawkeyes should be remembered. 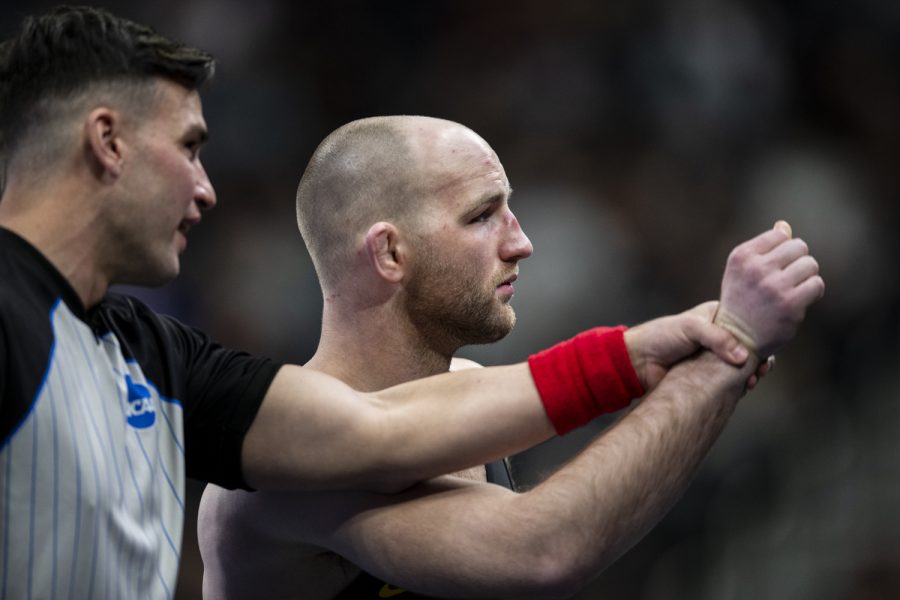 Iowa's No. 3 Alex Marinelli celebrates his final victory of his collegiate career over Wisconsin's No. 4 Dean Hamiti during session five at the NCAA Wrestling Championships at Little Caesars Arena in Detroit, Mich., on Saturday, March 19, 2022. Marinelli defeated Hamiti in a 165-pound match for fifth place by medical forfeit. Marinelli ends his career as a three-time NCAA All-American.

My 2022 NCAA Division I Men’s Wrestling Championships experience wasn’t what I expected it to be at the beginning of the year.

When my coverage of the Iowa men’s wrestling team began in November, I thought I’d be covering a team destined for its second consecutive NCAA title. The Hawkeyes won a team national championship in 2021 and all their wrestlers were back for the 2022 season. What could go wrong?

Well, quite a bit went awry. The Hawkeyes finished both the Big Ten and NCAA Championships in third place behind Penn State and Michigan.

As I watched the last day of the NCAA Championships unfold, I thought about this column. I knew it’d be running today; I just wasn’t sure what it was going to be about.

At the beginning of the season, I figured this postseason column might be about Iowa ending Penn State’s dynasty or the Hawkeyes starting one of their own. As it turns out, Iowa’s national title was just a small blip in Penn State’s recent run, as the Nittany Lions have won nine out of the last 11 NCAA Championships.

It was a hard event for me to cover. Watching seniors Alex Marinelli, Austin DeSanto, Michael Kemerer, and Jaydin Eierman come up short of their grandest career goals was heartbreaking. All three of those wrestlers have been pursuing individual national titles for the last six or seven years.

I watched 24 and 25-year-olds sit in front of reporters and take questions on the brink of tears. Marinelli even said he felt like he let Hawkeye fans down. “The Bull” is a four-time Big Ten Champion that accomplished a lot during his time in the Black and Gold singlet, but he still felt like he was a letdown because he didn’t win that coveted national title.

Kemerer fought through a shoulder injury for his entire 2021-22 campaign. “KemDawg” revealed to reporters on Saturday that he sustained a shoulder injury that will eventually require surgery in the fall. He opted out of surgery and gutted out the season, earning All-America status.

Eierman sustained a torn ACL at the 2022 Big Ten Championships. He still tried to maneuver his way through the NCAA Championships with the ailment. Ultimately, the injury was too much for him to overcome.

Throughout his match, Eierman grabbed his knee. Judging by his face, Eierman was in agony. Before he decided to injury default, Eierman was literally jumping back to the center of the mat on one leg, only to have his bad knee contorted in all sorts of different ways again. For the first time ever, I couldn’t watch a wrestling match that was happening right in front of me. Knowing the nature of Eierman’s injury, how much pain he was in, and the type of punishment he was taking, I had to look away.

In the last collegiate match, he actually wrestled, Marinelli was defeated by Cal Poly’s Evan Wick. Marinelli was 4-1 all-time against Wick before Saturday.

So, where am I going with this? Well, I think what I’m doing is contextualizing why Iowa head coach Tom Brands and his fans believed Iowa had three consecutive transcendent teams and got just one national title.

Iowa didn’t win in 2020 because the NCAA Championships were canceled because of COVID-19. This season, senior Spencer Lee had to stop wrestling in January and have surgery to repair two torn ACLs. He’s one of Iowa’s five starters that sustained season-ending or extremely prohibitive injuries. With a healthy roster, Iowa probably wins another national championship this year.

Sure, it looks like the Hawkeyes underperformed on paper. They had three straight all-time teams and got just one national title in 2021.

I don’t think the Hawkeyes should be judged that way. If it weren’t for extenuating circumstances like COVID-19 and injuries, Iowa would have three NCAA Championship trophies to its name.

Regardless, this Iowa team was still the squad that brought the Hawkeyes their first national title since 2010. Fans should judge this Hawkeye team by what it actually accomplished, not by what it didn’t do. After all, Iowa might not have another team like this for a decade.