A legacy of leadership — Chuck Swanson reflects on time with Hancher

After his retirement announcement, Chuck Swanson reflects on the memories, relationships, and accomplishments made while acting as business manager, associate director, and executive director of Hancher Auditorium. 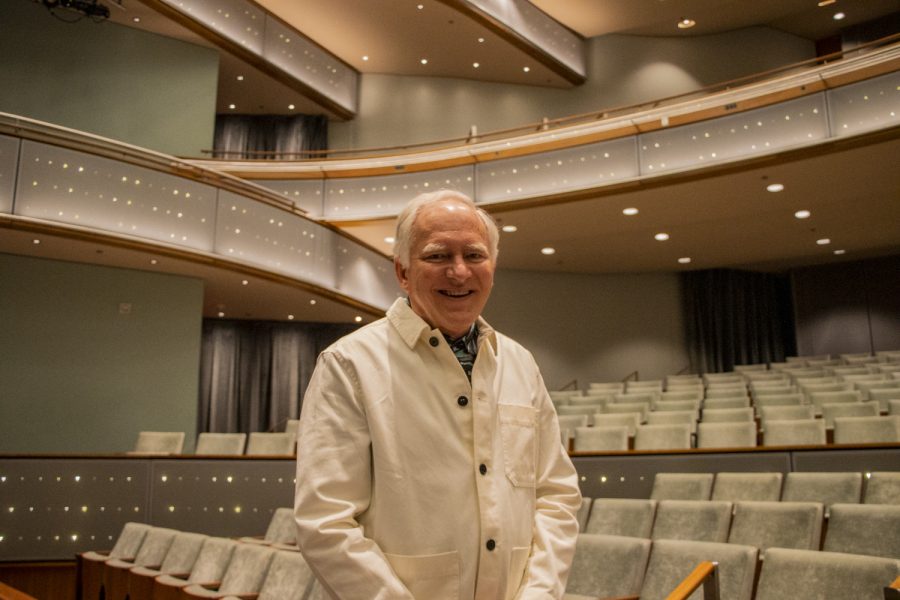 Chuck Swanson, the executive director of Hancher, who is soon retiring, poses for a portrait in the Hancher building on Tuesday, March 22, 2022.

When Charles “Chuck” Swanson was an undergraduate student at the University of Iowa in 1972, he saw the opening of Hancher Auditorium. A sophomore at the time, he sat in the audience of Hancher’s inaugural grand-opening performance — a production of the Broadway musical The Music Man, written by Iowa-born composer Meredith Willson, whom Swanson was able to meet that night.

Immediately, Swanson said, he was captured by the spirit of Hancher, but never expected to spend nearly 40 years leading the venue.

Originally from the small town of Spencer, Iowa, Swanson said seeing performances at Hancher was an entirely new experience, ones that would establish his love for the venue and the University of Iowa.

“I’ll never forget that original building, walking in that building and just feeling the excitement,” Swanson said. “I’d never seen anything like that ever in my whole life.”

In 1985, Swanson returned to Hancher as its business manager after spotting an advertisement for the position. He took on the role of associate director in 1990, and was eventually chosen to lead the venue as executive director in 2002.

Now 69, Swanson announced his retirement on Feb. 1, 2022 in a video addressed to Hancher Partners members, a group of Hancher’s donors.

Swanson said that his time with Hancher and the UI ultimately led him to make countless memories and friendships to last a lifetime, and that he hopes current and future students will use their time on campus to do the same.

Looking back on a legacy

Swanson’s direct impact on Hancher is noted in his job title, which officially reads, “Building A Legacy Executive Director.”

Swanson led Hancher through several impactful events during his time with the venue, firmly establishing his legacy as the performing arts center’s third executive director. However, he noted that without the collaborations and connections with colleagues, friends, audience members, and everyone else he has interacted with during his various roles — he could not have acted successfully as Hancher’s leader, nor continued its established role as a vital cultural arts center.

He said the early lessons he learned while acting as Hancher’s business manager were from the “founding fathers” of Hancher, including former UI President Sandy Boyd, then-Dean of Students and former Vice President Philip Hubbard, and Hancher’s previous directors, Jim Wockenfuss and Wally Chapell.

“They all had a vision for the arts on this campus,” Swanson said. “They really wanted a lively creative arts environment, and so I took that through my whole career. I took that very seriously.”

One of Hancher’s main goals, Swanson noted, was established in its early days by President Boyd, who declared the venue as “the biggest classroom on campus.” He said that Hancher’s focus on education to UI students and beyond has been something he focused on throughout his career.

Swanson’s first boss at Hancher, Phillip Jones, who worked under Hubbard in the Student Services department and later also became vice president, was responsible for Hancher’s leadership at the time. He noted that as Swanson became executive director, there was a passionate initiative to carry on the educational responsibility of Hancher as a resource for more than just entertainment.

“When Chuck inherited the responsibility of running the building, running the program, it also came with an innovation not only for Hancher, but for performing arts,” Jones said. “People were proud to work for him.”

Swanson has guided Hancher through both hardships and exciting changes, including the June 2008 flood and the destruction of the original Hancher facility, as well as its subsequent reopening in 2016.

After the original building was destroyed along with several other campus buildings in the flood, Swanson served on the project team that designed and built the current Hancher Auditorium.

During the eight-year interim of recovery, planning, and reconstruction, Swanson worked to carry on Hancher’s mission even without a main facility to work from.

Swanson noted that during the original building’s construction in the 1970s, three workers died. Because of this, Swanson said the project team focused the entire journey from design to construction on the workers themselves, emphasizing Hancher’s first core value of “people first.”

Jean Florman, the former director of the UI Center for Teaching, wrote in an email to The Daily Iowan that she couldn’t imagine anyone else being as successful in shepherding Hancher from tragedy to triumph.

“Chuck’s perennial optimism and creative spirit, combined with his focused pragmatism ensured that that massive undertaking resulted in a building beyond our wildest dreams,” Florman wrote. “And because Chuck just loves people, he made sure all the workers were publicly acknowledged and applauded as the artisans who made it happen.”

When recollecting the relationships and friendships he made while designing the new building, Swanson was nearly brought to tears.

“It was the most wonderful group of people I’ve ever, ever met, and we bonded together because of the international and national reputation and local reputation, and the love of Hancher,” Swanson said. “Everybody missed Hancher once we had the flood. Everybody on that team knew the importance of this job.”

Swanson emphasized the reach of Hancher not only within Iowa, but also on national and international levels. As Hancher’s reach extends into far-out communities, so too does Swanson’s legacy.

From 2002 until 2009, Swanson worked closely with Judy Hurtig, the previous artistic director of Hancher. Together, they pioneered many of Hancher’s opportunities outside of Iowa City. One of which, mentioned by both Jones and Swanson, was the statewide Joffrey Ballet tour in 2007.

For Hancher’s 35th anniversary that year, Swanson and Hurtig organized free outdoor dance performances in five different Iowa cities as a “gift to the state,” which reached over 35,000 people.

“They were able to get dance programs for the communities without charging them,” Jones said. “That was done through fundraising and through their ability to manage resources and the contributions. They received clearly a reflection of the caring that [Swanson] and his staff demonstrated to people.”

Swanson also attributes his people-based philosophy to Sandy Boyd, who told Swanson that leading Hancher would be “all about friend-making.” One way that Swanson said he established and reaffirmed many of his friendships over the years is through several donor trips to locations all over the world. Alongside a group of Hancher Partners, Swanson has traveled to New York, Chicago, Las Vegas, and even Europe on one occasion.

“When you travel with people, you really get to know people very, very well,” Swanson said. “Everybody has a story. Everybody has a wonderful memory that they want to share, and so this just builds those memories.”

Florman wrote that, ultimately, Swanson has invested great energy into connecting communities across the state through his ability to bring together unlikely collaborators to meaningful ends.

“Through his focus on Hancher as an educational space, he has created relationships and collaborations that no other peer institution can claim,” Florman wrote.  “I think it’s hard for many people to think of Hancher without Chuck at the helm, but he has set the stage for new leadership to build on his spectacular run.”

Swanson will retire in summer 2022, although he has not chosen an official date yet. After he leaves the position, the structure of Hancher’s leadership will change — in a press release published on March 10, the UI announced the creation of the Office for Performing Arts and Engagement, which will begin overseeing Hancher on July 1, 2022.

Although the position of executive director will still exist, the role will be expanded to include leading the new office, as Hancher’s leadership will ultimately be brought closer to UI administration.

Swanson summarized his feelings on retirement with a quote from television personality Mister Rogers, whom Swanson said he admired in his childhood, and resonates with even now: “Often when you think you’re at the end of something, you’re at the beginning of something else.”

“I’ve been thinking a lot about that,” Swanson said. “I, of course, don’t know what that something else is yet, but [Rogers] also said, ‘A new beginning means closing the book on one chapter, in order to bring in the next.’”