The larger-than-life, top-seeded heavyweight won his second straight national title Saturday night, stuck a signature backflip, and then left his shoes on the mat. 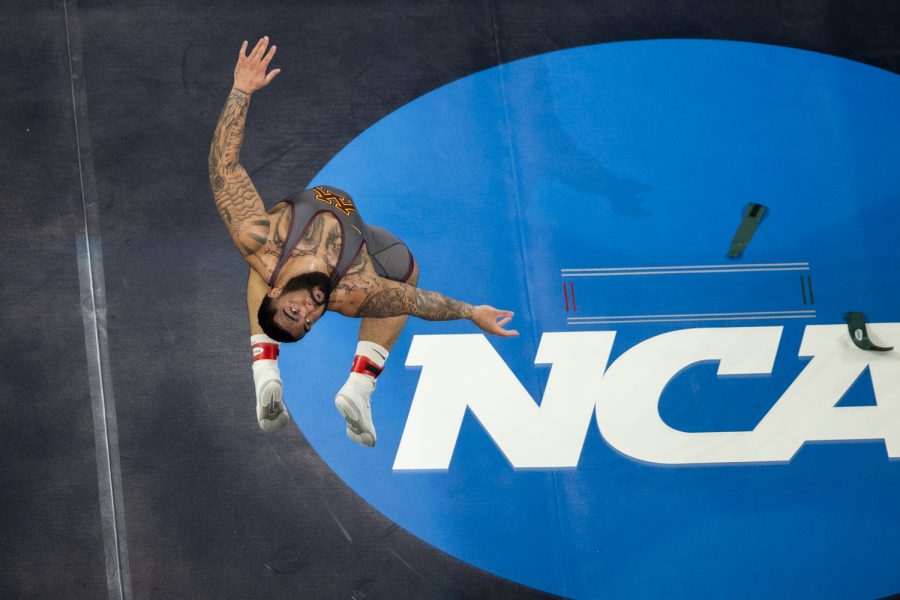 DETROIT — On March 6 at 9:45 p.m., the country’s best heavyweight, Gable Steveson, let the world know he was going to win his second consecutive national title at the NCAA Division I Men’s Wrestling Championships.

“I’m going to make this last NCAA Championships the greatest show you will ever watch and then leave my shoes on the mat. The last 5 matches of my career,” Steveson tweeted. “See u in Detroit.”

I’m going to make this last NCAA Championships the greatest show you will ever watch and then leave my shoes on the mat.. The last 5 matches of my career. See u in Detroit.

Steveson wrestled and won his last NCAA Championship Finals bout Saturday night. After he picked up a 6-2 win over Arizona State’s Cohlton Schultz, Steveson followed through on his promise, leaving his shoes on the mat.

Steveson’s theatrics didn’t start with his shoes either. Immediately after an official raised his hand and declared him a national champion, Steveson took flight.

The now four-time All-American ran a couple of steps and bounced into his trademark back handspring into a backflip.

One of the best to ever step on the mat. Thank you @GableSteveson for all you have done for the sport of wrestling.#NCAAWrestling pic.twitter.com/6K1XsdaSye

In interviews prior to the NCAA Championships, Steveson said he had decommissioned the backflip celebration. He brought the move out of retirement for the fans at Little Caesars Arena Saturday night.

“People love to see it,” Steveson said of his victory celebration. “You know, people just chant [for] it, and I would hate it if someone pays a lot of money to sit in their respective seats and they’re chanting, ‘backflip’ and I don’t do it. I gotta put on a show for them.”

Steveson’s for-the-people approach and supreme confidence was not something he developed over time. The reigning Hodge Trophy winner said he’s liked the spotlight since he was young.

“I’ve always been stubborn to be like on camera and taking pictures of myself wearing [fashionable] clothes and stuff,” Steveson said. “Growing up, I just had an itch to be a showman and show the crowd a show.”

Steveson said that, like his showmanship, his swagger and confidence were always a part of his personality. He noted that his confidence helped him be decisive in his last collegiate bout Saturday night.

“It’s just built in me,” Steveson said of his self-confidence. “Ever since I was a kid, I just loved to talk the talk and walk the walk. If you score points, you’re going to win.

“Today, just shooting the best shots I possibly could on a bigger body like Cohlton Schultz, who’s a Greco specialist, and who knows how to roll people up in 30 seconds to a minute,” Steveson added. “Just having that confidence to do that on a big stage is a lot, but you know, I feel like I’m built for this and I’m built for the big stage.”

Although Steveson’s career on a college mat is most likely over, he’s not done wrestling or performing.

Per ESPN, Steveson signed a name, image, and likeness deal with the WWE on Sept. 9, 2021, that allowed him to finish the college season and join the organization as a full-time performer after he graduates in May. He trained for the WWE during the school year.

“I got a good supporting system with Triple H, Paul Heyman, guys like Brock Lesnar, and Vince McMahon’s a genius, you know, so I hope that he can push me right,” Steveson said. “Who knows, you may see me at WrestleMania.”

Steveson says his professional influences include household WWE names that were also well-known in collegiate wrestling like Lesnar.

“It’s weird that I’m getting close to that spot,” Steveson added.  “And it is odd that like, people are asking me for pictures and autographs, you know, I’m not used to it, but now I’m getting used to it because I have to.”

In fitting Steveson fashion, after one show ends, another begins.

Steveson ended his college career on a 47-match win streak. His overall record was 86-2.

Steveson’s WWE debut date has not been announced.