Former Hawkeye Lauren Jensen eliminated Iowa women's basketball from the NCAA Tournament with a go-ahead 3-point shot with 12 seconds left in the game. 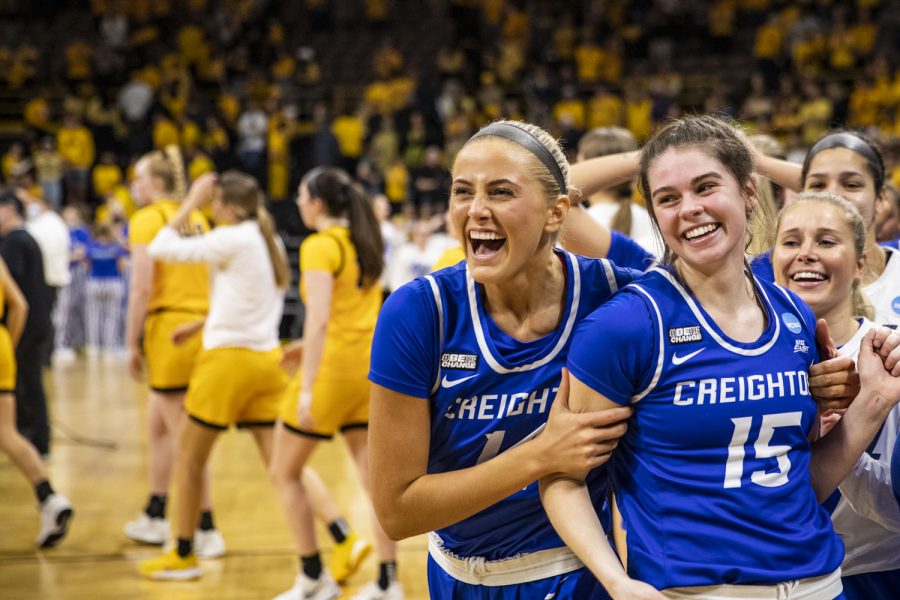 Creighton celebrates their win after a 2022 NCAA Second Round women’s basketball game between No. 2 Iowa and No. 10 Creighton in sold-out Carver-Hawkeye Arena on Sunday, March 20, 2022. The Bluejays defeated the Hawkeyes, 64-62, advancing to the Sweet 16 for the first time in program history.

Former Hawkeye and current Creighton starter Lauren Jensen had her shining moment on Sunday at Carver-Hawkeye Arena as she sank a go-ahead 3-pointer with 12 seconds left in the fourth quarter.

Her 3-point shot silenced the sold-out Carver-Hawkeye Arena crowd, and ended the No. 2 seed Hawkeye women’s basketball team’s season in the second round of the NCAA Tournament.

“Honestly, I was just super excited,” Jensen said postgame. “I honestly didn’t know if it was going to go in, it kind of rattled off the back rim there. It wasn’t super clean, but I’m just glad it fell.”

Jensen scored nine of the Bluejays’ last 10 points of the game to push Creighton past Iowa, 64-62.

Playing against her former team, Jensen led Creighton with 19 points on 8-of-15 shooting from the field, including 3-of-7 from beyond the arc. She was also scrappy on the boards, grabbing seven rebounds.

“People had asked me, ‘How’s Lauren going to feel today? What’s Lauren gonna play like?’” head coach Jim Flanery said. “Those last few minutes had to be magical and special. We’re super proud of her and we’re super proud she’s a part of the program.”

When Jensen was a Hawkeye in her freshman season in 2020-21, she averaged 1.7 points per game while appearing in 17 contests.

Jensen felt that familiarity with Carver helped her adjust to the moment.

Creighton was one of Jensen’s top choices coming out of high school, but she originally picked Iowa. When she entered the transfer portal after the 2020-21 season, Flanery said Creighton’s assistant coaching staff’s close relationship with Jensen helped land her with the Bluejays.

Jensen also had a connection to Creighton graduating senior Temi Carda, who was the Bluejays’ leading scorer in 2020-21 with an average of 15.6 points per game.

In her first season with Creighton, Jensen has started all but one of the Bluejays’ games and averaged 12.4 points per contest. She also grabs an average of four rebounds and dishes out two assists.

Now, the sophomore transfer will be known as the player who sent the 10th-seeded Bluejays to their first Sweet 16 in program history.

“Right away from summer workouts, this team welcomed me with open arms and made me feel at home and a part of the team, and I’m just so grateful for that,” Jensen said. “To be able to do that with them here today is just so great. We’ve had such an awesome season, and we knew from preseason workouts that we could do something special.”

Creighton will face the winner of No. 3 seed Iowa State and No. 6 seed Georgia in Greensboro, North Carolina, next week for a chance to advance to the Elite Eight.