The Hawkeyes earned their spot in the Big Ten Championship game behind a 32-point performance from Keegan Murray. 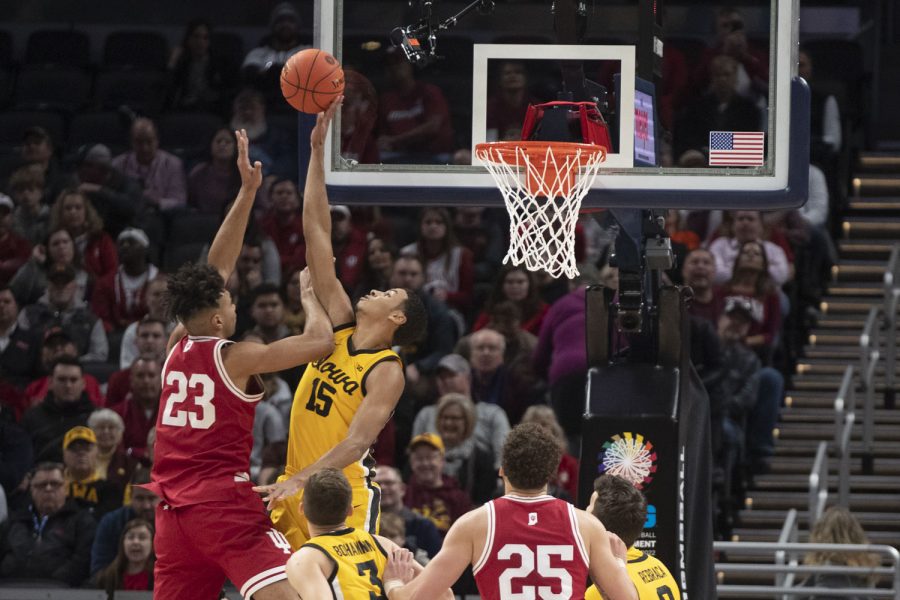 Iowa forward Keegan Murray blocks a shot during a men’s basketball game between No. 5 Iowa and No. 9 Indiana in the Big Ten Basketball Tournament Semifinals at Gainbridge Fieldhouse in Indianapolis on Saturday, March 12, 2022. Murray led the team with 2 blocks. The Hawkeyes defeated the Hoosiers, 80-77.

INDIANAPOLIS — Saturday’s Big Ten Tournament semifinals clash between Indiana and Iowa pitted two of the best players in the conference against each other.

Keegan Murray has been a star for Iowa all season long and has been recognized as one of the best players in not only the conference, but the country. The first-team All Big Ten nominee was recently named a semifinalist for the Naismith Award and broke Luka Garza’s single-season scoring record set last season against Rutgers in the Big Ten Tournament quarterfinals.

Indiana’s Trayce Jackson-Davis has not got the same amount of national press as Murray, but has had another impressive season with the Hoosiers. Jackson-Davis has averaged 17.7 points and 8.8 rebounds on his way to being one of the first names on the All-Big Ten second team. The two have both put in strong performances in big games throughout the season, and Saturday’s Big Ten Tournament Semifinal was no different.

Both players finished with at least 30 points. Jackson-Davis put up 31 points and secured 10 boards for a double-double. Murray put up almost identical stats, with his 32 points and nine rebounds going close to earning him a double-double.

Indiana coach Mike Woodson was full of praise for Murray at the end of the game.

“ I mean, there’s just nothing he can’t do with the basketball in his hand,” Woodson said. “He’s a pretty good defender and he rebounds the ball in terms of his height and length, so I mean, I think the sky’s the limit for him.”

Despite the similar statlines, the two took over the game in two different ways.

Jackon-Davis dominated the post on both ends of the floor. The junior did not shoot from beyond the arc. Instead, he got to work down low and made 15 of his 21 attempts from the field.

Despite dominating down low, Jackson-Davis managed to stay out of foul trouble and picked up just two fouls during the contest.

In the early going of the game, Iowa found themselves in an early hole and missed its first six 3-pointers. That all changed when Murray started shooting from deep.

“Yeah, for me their game plan was to take away my drive. I figured that out early on, so I tried to change the way I was playing,” Keegan Murray said. “I was able to get open looks and just credit to our guys that are screening for me, they were really big for us.”

The Hoosiers jumped out to a 15-3 run in the opening six minutes behind ten points from Jackson-Davis, but Keegan Murray responded with three 3s in the following three minutes to cut the deficit to just two points. Murray continued to be devastating behind the arc the entire contest and finished 8-10 from deep. His three pointer with 4:47 left in the game cut Indiana’s lead down to six and provided a spark for the rest of the team to come back and win.

“I thought pretty much anyone who I put in really performed at a very high level,” Iowa head coach Fran McCaffery said. “Some of them scored more than others but they were all rock solid.”

Murray has been electric during the Big Ten Tournament so far, averaging 28 ppg during the tournament. Murray and the Hawkeyes will play in their first Big Ten Championship since 2006 on Sunday against Michigan State/Purdue.

With Keegan Murray firing on all cylinders for the Hawkeyes, the team looks capable of winning its first Big Ten Championship since 2006.