The Undergraduate Student Government allocated a $20,000 reimbursement to the Office of the Dean of Students for renovations aimed at technological advances in four Iowa Memorial Union rooms. 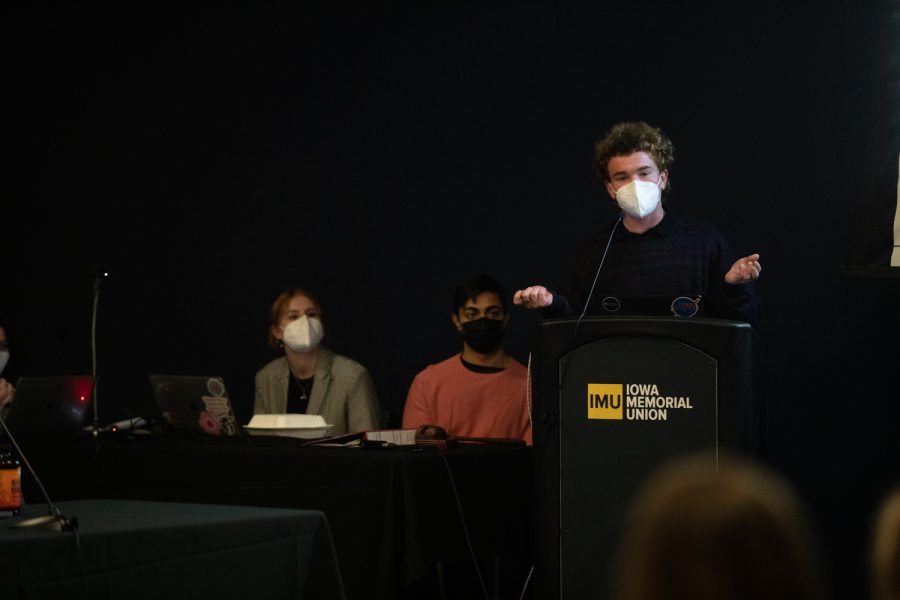 A USG senator covers his segment in the New Business segment of an undergraduate student government meeting on Tuesday, March 1, 2022.

The University of Iowa’s Undergraduate Student Government will reimburse $20,000 worth of funds for renovations to the Iowa Memorial Union on Tuesday through the Office of the Dean of Students.

The reimbursement, totaling $20,000, will be spent on technological renovations to four rooms in the building: The first-floor boardroom, River Room, The Divine Nine Technology Room, and the Multicultural Greek Council Room, according to a resolution passed by USG.

The legislation was heavily debated by the Senate, with Sen. Joshua Brown voicing concerns about the inclusivity of legislation for individuals who are deaf or hard of hearing.

“I will not be voting in the affirmative,” Brown said. “This institution needs to do a better job of prioritizing accommodations for people who are deaf and hard of hearing or experiencing some sort of hearing loss.”

Brown called for his fellow senators to oppose the legislation because of the accessibility shortcomings, but it passed 33-3 with one abstention.

“I do share Senator Brown’s concern,” Sen. Jaden Bartlett said. “I think it is important to include those clauses for accessibility and it is a priority, but realistically and pragmatically, I don’t feel comfortable about going against the administration by denying funding [for this].”

Hagedorn said the finance committee does not consider all funding requests from the Office of the Dean of Students.

“We know that it’s not perfect in accessibility, but this is a step forward … especially for our students who don’t feel comfortable going to in-person meetings,” Hagedorn said. “I would encourage you all to vote yes.”

Hagedorn said the advances in this piece of the legislation were a start and hearing equity could become a priority in the near future for USG.

“The university has not made hearing services a priority in the past, but I know they’re working on it,” Hagedorn said. “This is just one of many upgrades, this is just to make sure that we can integrate Zoom into these meeting rooms, which is a start. It’s not perfect.”