Michael Landez and Juliet Remmers have focused their thesis concert on the idea of time — exploring both historical and contemporary pieces. 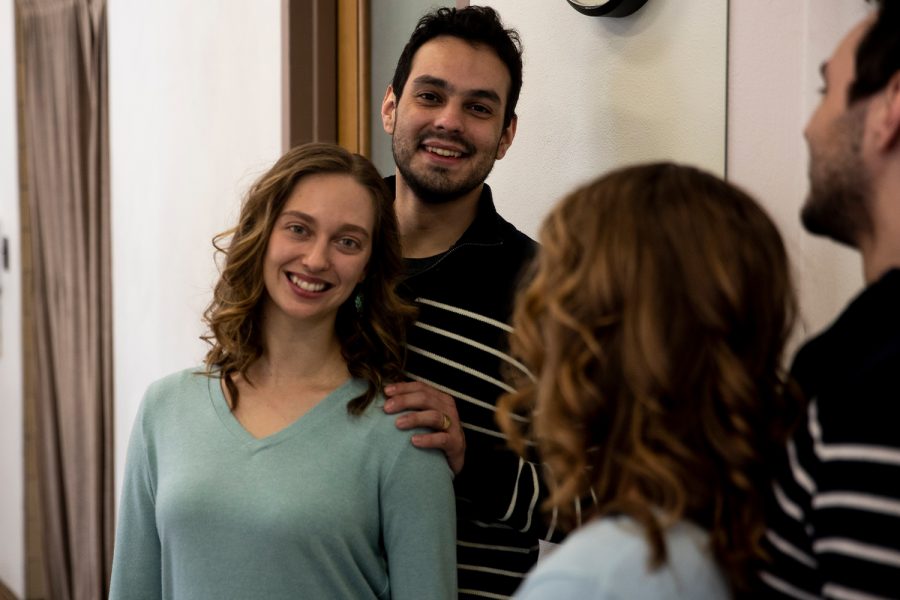 Juliet Remmers and Michael Landez, who are preparing for their dance performance coming soon, pose for a portrait in Halsey Hall on Thursday, March 3, 2022.

At this time of year, graduate students usually feel pressure to work on their thesis papers, but for two third-year graduate students working on their MFAs in dance on the performance track, their paper takes shape in the form of a concert.

At the University of Iowa’s fall 2021 Dance Gala, dance duo Michael Landez and Juliet Remmers performed the piece The Moor’s Pavane, originally choreographed in 1949 by revolutionary dancer José Limón. The dance was based around the Shakespearean tragedy Othello, where Othello kills his wife after hearing rumors that she cheated on him.

Remmers and Landez performed the dance as a quartet alongside fellow graduate dance students Darrius Gray and Emmalee Hallinan, and will do so again in their thesis concert.

Landez and Remmers met when they entered graduate school at the same time three years ago. For the past 18 months they’d thrown around ideas for a joint thesis concert.

Since their performance in the 2021 Dance Gala, the two have combined three other pieces, plus shorter dances to fill the gaps between the four main performances, to create their thesis concert, titled *TIMELESS MOTION.*

TIMELESS MOTION will run from March 30 to April 1 in the Space Place Theatre, one of the first returning in-person performances to use the stage.

The first piece in the concert was choreographed by Victoria Ballet Theatre artistic director Brenda Serrata Tally and developed into a solo for Landez.

Landez said that Tally is a good friend of his, so when he called her to ask for help choreographing a solo about being Brown in Texas, she immediately said, “I’m in.”

Landez, who is from San Antonio, Texas, decided to become a dancer after seeing a performance of The Nutcracker as a kid — an experience he described as a “classic origin story” for a dancer.

While preparing his solo, he and Tally discovered an alternate form of rehearsal that they self-titled “queer rehearsal.” On one trip over winter break, they decided to go see *West Side Story* instead of going to a traditional rehearsal.

“It sparks a lot of conversations and ideas, trying to trouble the process of ‘Where is the dance actually made?’” Landez said. “That’s been kind of a journey.”

After Landez’s solo performance will come The Moor’s Pavane, then Remmer’s solo piece, choreographed by freelance dance teacher Janet Charleston. Her solo is a piece that began as an improvisation but has been subsequently set into more designated choreography. The piece is still in its rehearsal stage, using a combination of Zoom and short in-person rehearsals.

Remmers is originally from Lawrence, Kansas, and like Landez, it was when her parents took her to see a ballet — though this time Swan Lake — that she first fell in love with dance. She joked that nobody could make her stop dancing — except maybe her knees.

The last piece in the program is another duet between the two dancers, choreographed by Dark Circles Contemporary Dance founder Joshua L. Peugh. Landez described the piece as an imagination of queer futures, adding that it is “very campy and ridiculous.”

“It sort of recalls a bygone era in some moments. It has some 50s-ish nostalgia and deals with issues of cultural appreciation,” Remmers said. “‘What is comfortable? What is uncomfortable? What does it mean to dance together with a good friend?’”

They both agreed that the final piece of their concert is their favorite part, but for two different reasons.

For Remmers, she enjoyed being able to dance together, and is excited to finish up the concert doing upbeat, energetic work as a team.

For Landez, he is most looking forward to the piñata they both get to destroy throughout the final dance.

In the final month leading up to TIMELESS MOTION,  Landez and Remmers will work on sewing costumes and meeting with a stage manager, lighting designer, and sound designer to ensure that their concert runs smoothly.

“I hope that people are excited to see a lot of dancing,” Remmers said. “I hope the audience members can come away feeling like they’ve experienced something that maybe has changed them in some way or changed their idea of what performance can do.”