The City Council hopes the shift will help focus on big-picture projects and initiatives, like prioritizing climate action, affordable housing, and social justice. 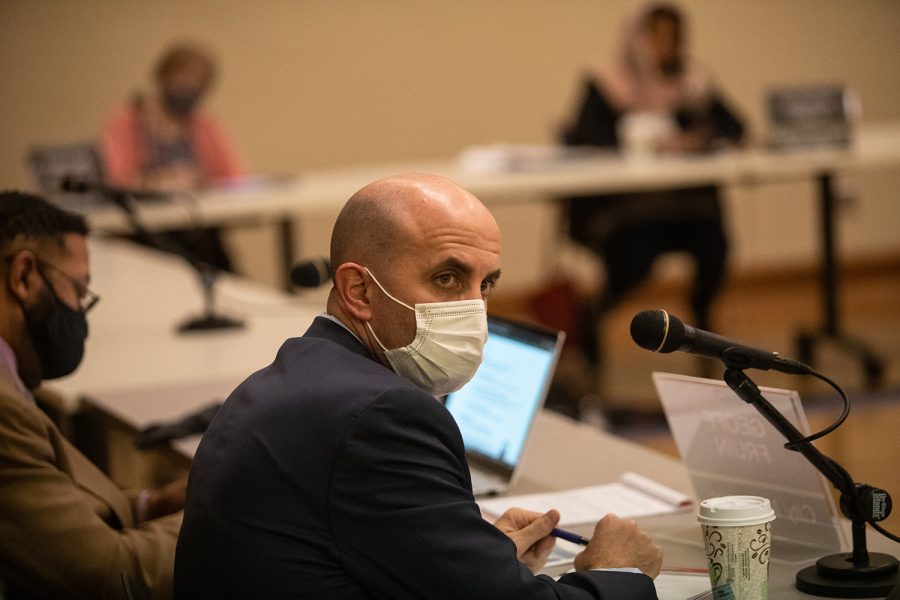 The Iowa City City Council’s next strategic plan, which councilors say will prioritize overarching climate action, affordable housing, transit, and social justice and equity, will determine the city’s trajectory for the next five years.

The current strategic plan was adopted on June 16, 2020 and will be in effect until the next plan is drafted and approved. The city’s fiscal 2023 budget was created with the new strategic plan in mind.

“The next 10 years, the next two strategic plans, are really critical to the future of Iowa City,” Councilor John Thomas said at a council meeting on March 1.

City Manager Geoff Fruin said in an interview with The Daily Iowan that the strategic plan lays out the goals of the community and is reflective of the vision of the elected city officials.

“We’ve been doing strategic plans for approximately the last decade,” Fruin said. “The strategic plan sets forth a vision and key activities from the elected leadership and the community. It is an opportunity for them to express where they want to see the community go over the next few years.”

The plan will set out goals for the city over the next five years, Fruin said — a shift from the previous two-year cycle for strategic plans.

“Historically, the city has done two-year strategic plans, which coincide with the election cycles here in Iowa City,” Fruin said. “We are going to be moving to a five-year plan, which just allows us to think a little bigger and perhaps pursue some more long-term objectives.”

As the current strategic plan expires, the City Council will lay out its vision for the upcoming years.

Councilor Janice Weiner said she believes the strategic plan connects the dots between different aspects of the community.

“It really is easy in any profession, in any part of life, to just focus on one thing, to focus on one issue, and not be able to step back and see the bigger picture,” Weiner said.

She said the city council’s focus on affordable housing was one example, as the council could also put solar panels on roofs of those affordable locations to address their climate goals.

For the next five years, Weiner said she hopes the plan continues to focus on moving toward equity and affordable housing, with a heavy focus on climate action.

“I think we’ve done this to some extent, but given where we are in the world, we need to make sure that climate and sustainability is included in basically every single step we’re looking at,” Weiner said. “If it’s not there yet, it needs to be.”

Weiner said the council wanted to continue to work on programs included in its January 2022 initiative that gave grants to small businesses, start-ups, and businesses owned by people of color.

The council has delegated staff as well as experts to each goal to best accomplish the goals in the strategic plan.

“There’s just a lot more we can do to put all of those pieces together,” Weiner said. “Several of us are going to sit down together soon and start to work through some of this.”

The city’s current initiatives are to:

The council will meet with Karen Kurt, executive director of East Central Iowa Council of Governments, in April to facilitate its conversation about what they want to include in the plan.

“The Council has devoted staff to climate action to a degree that is not typical of most cities in Iowa,” Becky Soglin, Iowa City’s Climate Action commissioner wrote in an email to The Daily Iowan.

In the fiscal 2023 budget, the climate action goals for the current strategic plan include:

Looking toward the next strategic plan, Soglin said the City Council is moving in the right direction to prioritize climate action.

“Ensuring there are continued and even increasing resources, including staff, to support the work of the accelerated actions and future needs will be crucial,” Soglin said.

The city has an Affordable Housing Fund which was created in 2016 and has been receiving $1 million annually since the start of the fund. As of 2021, there is $3.6 million in the fund.

The council will meet with its facilitator from Eastern Iowa Council of Governments in April ahead of the start of fiscal 2023.

“Black Lives Matter, questions of equity, climate change — I really do feel we are in a unique moment,” Thomas said.