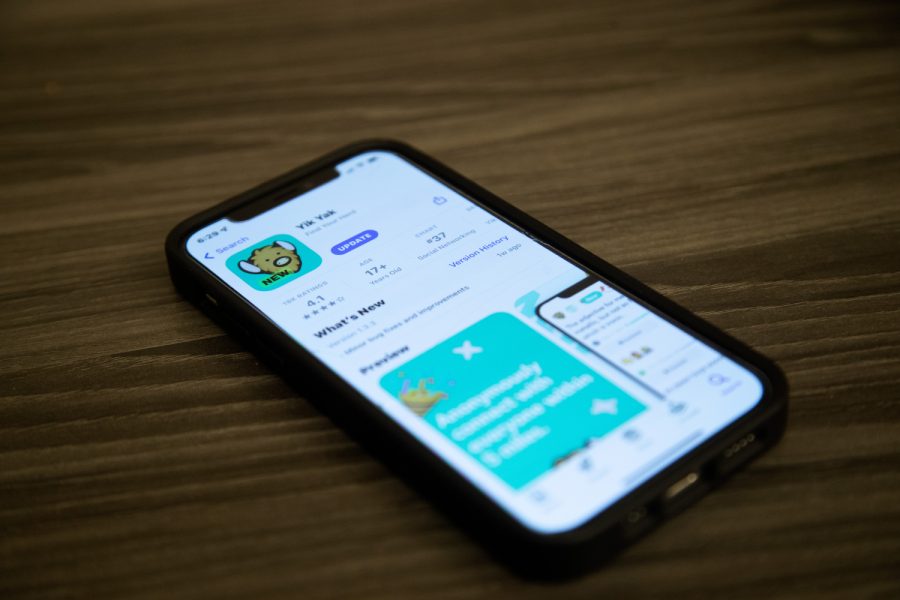 The Yak is back.

The anonymous social media app, Yik Yak, announced in August 2021 that the app would be available for download following its four-year hiatus. This announcement called for celebration by many — especially college students.

Yet, a major flaw prevails. The anonymity of Yik Yak makes the platform a target for hate speech and cyberbullying. Without accountability on Yik Yak, we have the responsibility to prevent hate on this platform.

Yik Yak was founded almost a decade ago by two college students, Tyler Droll and Brooks Buffington. Soon after the launch, Yik Yak became a popular platform for both high school and college students. Within one year of its release, the app had over a million downloads.

Yik Yak’s popularity is largely credited to two unique features: anonymity and proximity. The app connects users within a five-mile radius and allows users to post anonymously. Users can upvote or downvote a post, which influences the number of interactions users have with the post.

But Yik Yak’s success was short-lived. The app received universal backlash because of prevalence of bullying, discriminatory speech and threats of bomb and gun violence. By September 2016, Yik Yak only had 125,000 downloads.

On Aug. 16, 2021, a verified twitter account announced “ICYMI: After a 4 year hiatus, Yik Yak is available in the App Store again!”

The company website states, “On the new Yik Yak, it’s against the Community Guardrails to post bullying messages or use hate speech, make threats, or share anyone’s private information.”

In February, two Iowa State University students were arrested following an investigation from the FBI and Iowa Division of Criminal Investigation response to a Yik Yak post:

This event mirrors accidents that led to Yik Yaks shut down in 2017, showing the company has failed to address the long-standing problems.

Yik Yak has been the source of issues on the University of Iowa campus as well. In 2015, a string of posts targeted Asian students at the UI. The post included offensive language: “Guys if we don’t do something soon this university will be more Asian than anything, and if so, I’m leaving …” and “Iowa City? More like Chinatown.”

The features that make Yik Yak popular are what makes the app problematic. Because posts are anonymous, there is no way to hold users accountable for malicious language or threats. This allows for hate speech, bullying and threats to flourish. In addition, the proximity of the app targets specific groups of people.

In theory, the idea of Yik Yak is great. It’s a break from formal and sometimes scripted reality. But in practice, Yik Yak simply does not work.

The UI should take preventative measures to stop bullying, hate speech and threats. In 2016 administrators at Illinois College sought to ban Yik Yak. In response, the college’s Student Senate passed a resolution in favor of blocking it from campus internet networks, which the administration did.

The UI should follow Illinois College and block Yik Yak from campus internet networks. But, that alone will not be enough. As students, we need to stray away from this platform.

I know first-hand how challenging it can be to not succumb to the latest app or trend. Unless Yik Yak improves its policy for anonymity, it’s unlikely we will see any positive outcome from the platform. So, simply don’t download Yik Yak. To anyone who currently has Yik Yak, I encourage you to consider deleting the app, and seek out a different platform to connect.