Reynolds championed Republican policies and criticized the Biden administration in her response to Biden's State of the Union. Here are the facts. 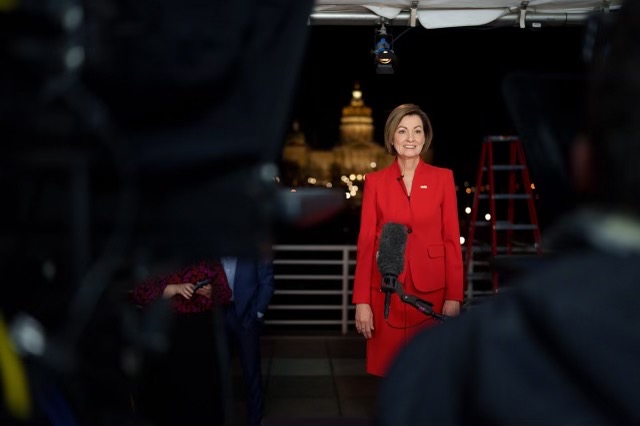 Iowa Gov. Kim Reynolds agreed with President Biden Tuesday night, saying the state of the union is good because of its people.

And, that was it. The rest of Reynold’s Republican response to Biden’s State of the Union was a sharp critique of the president’s performance from the White House.

“Even before taking the oath of office, the president told us that he wanted to ‘make America respected around the world again and to unite us here at home,’” she said at the beginning of her nationally televised speech. “He’s failed on both fronts.”

Here’s a look at statements she made.

“The disastrous Afghanistan withdrawal did more than cost American lives; it betrayed our allies and emboldened our enemies.”

People who helped the United States remain in Afghanistan. The Association of Wartime Allies issued a report on Tuesday ahead of Biden’s address that said 78,000 of 81,000 people in Afghanistan with pending special immigrant visa requests in mid-August still remain in the country. The report gives the United States credit for pulling 82,000 Afghan allies out of the country.

The U.S. State Department says it continues to work on helping Afghan refugees, but its most recently published update was on Dec. 13. We checked in August on Biden’s claim that the U.S. didn’t lose any credibility over how it left Afghanistan and found his claim to be Half True.

“We shouldn’t ignore what happened in the run-up to Putin’s invasion, waiving sanctions on Russian pipelines while limiting oil production here at home.”

This comment deals with the U.S.’s energy dependence more than Russian President Vladimir Putin’s invasion of Ukraine. In May 2021, Biden’s administration waived sanctions on Nord Stream 2 AG, a company building a pipeline from Russia to Germany, after its CEO engaged in sanctionable activity, Reuters reported at the time. Secretary of State Antony Blinken said waiving sanctions was in the U.S. interest, as a move to rebuild European relationships that had been frayed during the Trump Administration.

On Feb. 24, Biden announced new and increased sanctions on Russia, but spared Russian oil and natural gas exports. Biden said he was doing everything he could to “limit the pain the American people are feeling at the gas pump.”

As for limiting oil production at home, the claim is a common attack Republicans have leveled on Biden, usually focusing on the Keystone XL pipeline. On his first day in office, Biden canceled the creation of the Keystone XL pipeline, which would have brought oil from Alberta, Canada, to Steele City, Nebraska. We looked into a claim that the pipeline could have offset the amount of oil the U.S. currently imports from Russia and found it to be Half True.

“And they certainly won’t tell you that we should give billions in tax giveaways to millionaires and billionaires in Democrat-controlled states like California, New York, and New Jersey.  But that’s what the Biden Administration has been pushing for over the last year. That’s all part of Build Back Better.”

It’s not clear whether the tax plan Reynolds described is part of Build Back Better or not. We checked this claim in November when other Republicans made it and declined to make a ruling because the Build Back Better plan was still being negotiated in the Senate, and we didn’t know what the end result will be. We know, however, that the Republican criticism is based on a provision in the proposed bill that would raise the cap for a wage earner’s state and local tax deduction, or SALT, through 2030.

Analysts we’ve spoken with said about two-thirds of the nation’s millionaires would get a tax break with the proposal, although the benefits would begin going down in 2023. After-tax income would drop 5.9% for the top 0.1% of the nation’s taxpayers after 2022, the analysts said. Households making under $500,000 would gain more after-tax income in 2022.

“Many prominent Democrats still want to defund the police.”

Neither Biden nor any congressional Democrat in a leadership position has called for defunding the police.

Biden said during his speech that his goal is not to defund the police, and that the answer is to fund the police to increase the resources and training in their communities. The American Rescue plan provided $350 billion in funding to hire more police and invest in community intervention strategies.

Rep. Alexeandria Ocasio-Cortez, D-N.Y., has voiced support for a reduction to the New York Police Department budget, and she said, “We need to defund” Minneapolis’ police department in May 2020. Rep. Omar Ilhan, D-MN, has never stated publicly support for defunding police but has called to restructure the Minneapolis Police Department and for lawmakers to listen to the protests of those who are in support.

“The Biden Administration requires vaccines for Americans who want to go to work or protect this country but not for migrants who illegally cross the border.”

This is not accurate now, although it was before Oct. 1, 2021, for new immigrants needing medical examinations at the border. Previous Biden Administration policy was to make vaccines available to undocumented immigrants.

On Jan. 22, the Department of Homeland Security started requiring travelers attempting to enter the U.S. to be fully vaccinated against COVID-19.

The Biden administration’s vaccine mandate was focussed on large-employers, but the mandate was blocked by the Supreme Court earlier this year. Workers in health care facilities that receive Medicare and Medicaid funding and members of the military are required to be vaccinated.

“And we’ve actually gone to the border—something that our President and Vice President have yet to do since taking office.”

This is wrong. Vice President Kamala Harris visited the U.S.-Mexican border in June 2021.

“What happened—and is still happening—to our children over the last two years is unconscionable. Learning loss. Isolation. Anxiety. Depression. In so many states, our kids have been left behind and many will never catch up.”

Disruptions the pandemic created for education have led to a drop in students’ test scores. A July 2021 analysis from McKinsey and Company found that first- through-sixth graders were an average of four months behind in reading learning and five months behind in math by the end of the 2020-21 school year.

Reynolds’ claims that children faced anxiety during the pandemic are supported by McKinsey’s survey — parents reported their children were more withdrawn and likely to self-isolate than they were pre-pandemic. A December 2021 McKinsey report showed some improvement in these trends, with test scores beginning to improve, and the number of parents very or extremely concerned dropped from 35 to 28%.

Republican leaders around the country are balancing budgets and cutting taxes.

This is largely accurate because almost all of the nation’s states, regardless of the party in power, require by law or in their constitutions a balanced budget. That means Democratic leaders around the country are balancing budgets, too. Reynolds’ Iowa ended fiscal 2021 with a $1.24 billion surplus, almost triple the revenue state budget analysts had projected going into the fiscal year. The surplus led the state’s Republican-led Legislature to pass a new, lower flat 3.9% income tax rate that Reynolds signed into law earlier in the day Tuesday.

Our previous reporting shows that the current surplus can be explained in large part by Iowa receiving $1.48 billion from the 2021 American Rescue Plan. Total tax revenue, which included double-digit percentage increases in corporate and sales taxes, was up, too, in Iowa – 11.7% over the previous year, according to Iowa’s nonpartisan Legislative Services Agency. Income tax revenue over the same year increased by 6.1%.

“Iowa was the first state in the nation to require that schools open their doors.”

According to EdWeeks’ state-by-state map of schools openings and closures, both Arkansas and Florida required five days of in-person instruction in August and November 2020, respectively.

Iowa was the first state to require that schools offer at least some in-person instruction, which would back up Reynolds’ claim that Iowa schools were the first required to “open their doors.”

But Arkansas and Florida required full in-person instruction before Iowa. These states mandated in-person education through the state’s Department of Education, not legislation, like Reynolds signed later.

And it shouldn’t come as a surprise that out of the top 20 states with the lowest unemployment rates, 17 have Republican governors.

This is accurate. The only states with Democratic governors on the list of 20 best unemployment rates are Kansas, Minnesota and Wisconsin.

Gov. Kim Reynolds’ Republican response to the State of the Union Address, March 1, 2022

PolitiFact, “How the Build Back Better bill affects taxes for millionaires, the middle class,” by Louis Jacobson, November 16, 2021

Americans for a Balanced Budget, “State-by-State”

The White House, The Build Back Better Framework

The White House, Remarks by President Biden on Russia’s Unprovoked and Unjustified Attack on Ukraine,  Feb. 24, 2022

Department of Homeland Security, DHS to Require Non-U.S. Individual Travelers Entering the United States at Land Ports of Entry and Ferry Terminals to be Fully Vaccinated Against COVID-19, Jan. 20, 2022.

The Associated Press, “Arkansas: Schools must be open 5 days a week despite virus,” by Andrew Demillo, Aug. 5, 2020.\

The Hill, Omar defends call to dismantle Minneapolis police: You can’t reform a department ‘rotten to the root‘, June 6, 2020.