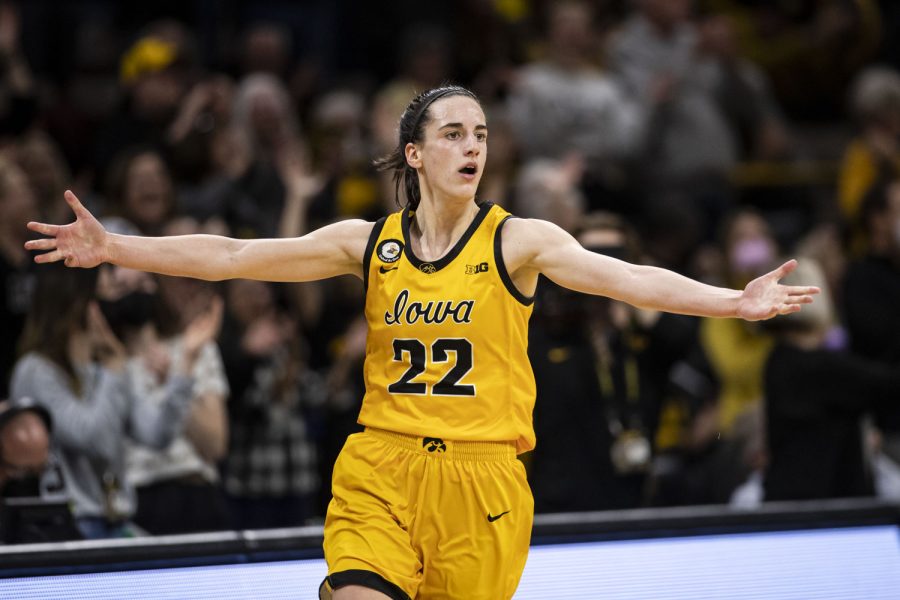 Iowa guard Caitlin Clark celebrates during a women’s basketball game between No. 21 Iowa and No. 6 Michigan at Carver-Hawkeye Arena on Sunday, Feb. 27, 2022. The Hawkeyes became regular season Big Ten co-Champions after defeating the Wolverines, 104-80. In a press conference following the game, Clark spoke on her excitement when her teammates scored. “I was just passing it to them and they were knocking it down,” Clark said. “And I was running back celebrating every time so that's pretty fun.”

She was Big Ten Player of the Week seven times this season, and has accumulated a total of 31 conference weekly honors in her collegiate career.

“Obviously, it’s a tremendous honor, I wouldn’t be here if it wasn’t for my teammates and my coaches,” Clark said in a Zoom press conference with reporters Tuesday afternoon. “And I truly mean that, they do make me look really good. I think it’s pretty outstanding and cool to say that it’s kind of resided here in Iowa City four out of the last five years, I think it speaks to the coaches and what they’ve built here.”

The sophomore is the fourth Hawkeye to win Big Ten Women’s Basketball Player of the Year in five seasons. Former Hawkeye center Megan Gustafson won the honor for two consecutive years in 2018 and 2019, and guard Kathleen Doyle brought the honor to Iowa City in 2020.

“It means so much, because in recruiting you can say, ‘Look, you come here, and the development of our players, the success of our players, the recognition not only regionally, but nationally, is so good,’” head coach Lisa Bluder said. “ … It means a lot to our program.

“What ties [Clark, Gustafson, and Doyle] and makes them the same is their work ethic, their confidence, their belief in themselves, how great of a teammate they are, those are things that are similarities between the women,” Bluder added of Iowa’s recent player of the year honorees.

Clark posted an NCAA-leading five triple-doubles in 2021-22. She had two consecutive 30-point triple-doubles against Nebraska and Minnesota on Jan. 26 and 30, respectively — a feat that no NBA, WNBA, or Division I men’s or women’s player had achieved in the past 20 years.

Clark led the nation with 27.5 points per game in the 2021-22 regular season. She registered a career-high 46 points against Michigan on Feb. 6, beating her previous record of 44, set on Jan. 2.  She also tops the Division I women’s basketball leaderboard with 225 total assists — 8.3 per game.

This is Clark’s second yearly honor from the Big Ten in as many seasons. Clark was named Big Ten Freshman of the Year in the 2020-21 season.

“Obviously, I feel very strongly that she should be national player of the year,” Bluder said. “I’m excited for her to get this first award, and that’s necessary to get the second award.”

Clark led the Hawkeyes to a Big Ten regular season championship this season as they finished 14-4 in conference play. Iowa shares the conference title with Ohio State.

“Everyone is kind of glowing around our whole program, so it was just so fun to kind of add that layer on top of what already is a great season,” Czinano said of the conference awards.

Warnock registered 12.4 points, 6.9 rebounds, and 2.4 assists across 22 games this year.  She missed five of Iowa’s regular season games with injuries.

Iowa will have the No. 2 seed in the 2022 Big Ten Tournament, which starts on Wednesday. The Hawkeyes begin play on Friday at 5:30 p.m., taking on either 10th-seeded Minnesota or seventh-seeded Northwestern.