At a Johnson County Board of Supervisors meeting earlier this month, Sheriff Brad Kunkel said the new crop of sheriff reserves is the most diverse group he has seen. Several of them are bilingual in Spanish, Mandarin, and Hindi. 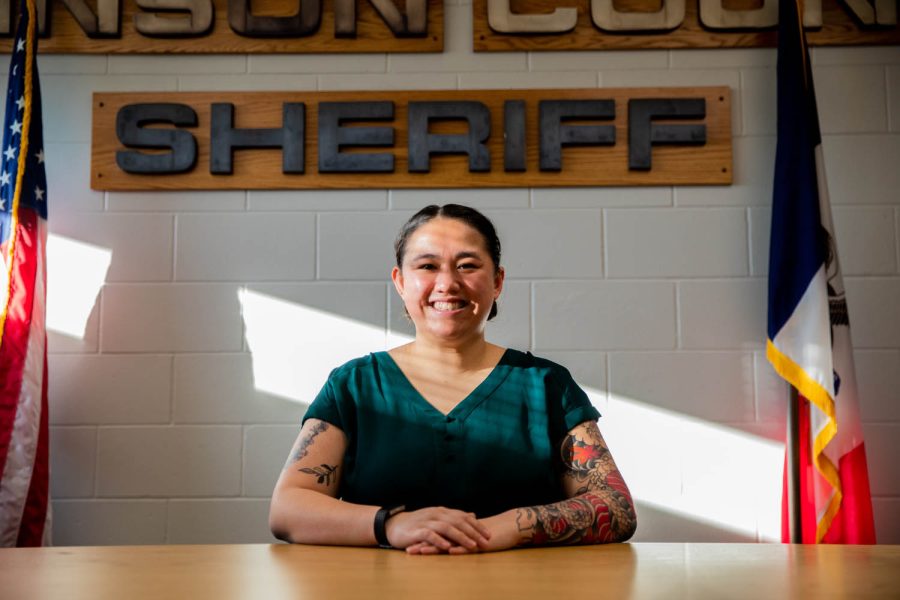 Kathie Pham, a soon to be sheriff, poses for a portrait on Monday, Feb 28, 2022 in the Johnson County Sheriff’s Office.

The Johnson County Sheriff’s Office is adding a new group of reserve deputies who are bilingual in various languages in spring 2022. Sheriff Brad Kunkel said this year’s reserves are the most diverse group the department has seen.

Kunkel said some of this year’s reserves speak Spanish, Mandarin Chinese, and Hindi.

“We do have lots of minorities in the community, so it’s great to have people that can assist us in communication,” Schuerer said.

Avigail Rodriguez, a recently hired Guatemalan reserve deputy whose native language is Spanish, said she feels being bilingual will benefit her as a reserve.

“I have that advantage to my job because if I were working with a deputy, I would probably be an asset to any language barrier, which I’m sure happens a lot,” Rodriguez said.

Rodriguez said her time as a reserve deputy is an opportunity to experience what it’s like to work in law enforcement, and said she would later like to pursue working full time as a sheriff’s deputy.

There are 956 reserve officers in Iowa annually, according to the Iowa Law Enforcement academy.

After being appointed by the sheriff, reserves must complete a series of six training modules that are listed in Iowa Code Chapter 80D.

Rodriguez said she wanted to get into law enforcement because of the impact police officers had on her growing up in Los Angeles, where there was a strong gang presence in her neighborhood.

“[Law enforcement] always made me feel safe and was there to protect the neighborhood, so I wanted to give back as well and return the favor,” Rodriguez said.

Rodriguez said she is expecting to start her time as a reserve deputy in March.

Schuerer said being a reserve deputy offers citizens the experience to volunteer and give back to the community in a unique way.

“It’s a great way for ordinary citizens to maintain their full-time career but get a greater understanding of what law enforcement does in the community,” Schuerer said.

Kathie Pham, a Vietnamese American, who has also worked as a reserve deputy since March 2021, said the role of a reserve deputy is important because they can build a network for community outreach.

After having bad experiences with law enforcement growing up, Pham said she held a disdain for police officers and other branches of law enforcement. After having this negative perception for so long, she wanted to see if she could change it.

“I realized that having this built-up hatred and dislike of people in uniform wasn’t doing much for myself,” she said. “So instead of having this hatred, I decided to take a different perspective and get involved in law enforcement, and make a difference from inside-out rather than outside-in.”