At her presidential installation, University of Iowa President Barbara Wilson shared her goals for her presidency and the legacy that the university has. UI and state leadership shared their wishes and confidence for Wilson. 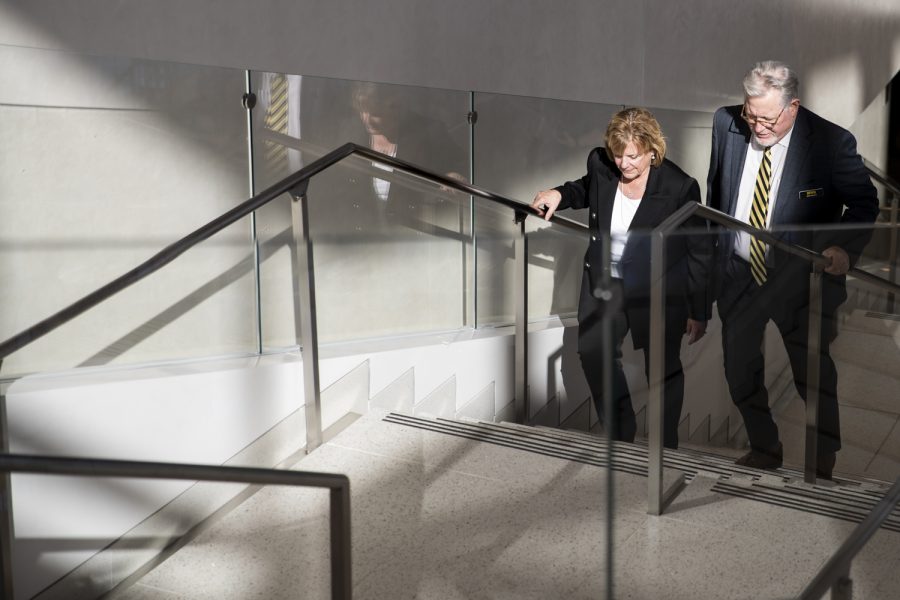 University of Iowa President Barbara Wilson walks up the stairs for a reception following her installation at Hancher Auditorium in Iowa City on Friday, Feb. 25, 2022. Wilson takes over as the third woman in the school’s history to serve the position.

Comprehensive excellence, creativity, and community are the “secret sauce” that makes the University of Iowa so special, according to the institution’s president, Barbara Wilson.

At the 22nd UI presidential installation, Wilson said she will prioritize student mental health and diversity, equity, and inclusion efforts during her presidency.

“Today, we are setting priorities that will be crucial for the next 175 years of this astounding university,” Wilson said. “I promise I won’t be president during all of those years, but I’m going to set the stage for the future.”

On the university’s 175th anniversary, Wilson became the third female president to be installed at the UI.

“I feel honored and privileged and excited,” Wilson said in an interview with The Daily Iowan. “It’s amazing to be able to celebrate history and as the third woman there are not very many research institutions that can say that.”

State Board of Regents President Mike Richards said that while the regents were looking for the UI’s new president, they were looking for someone who had experience in public higher education and brought an innovative perspective.

“Barbara Wilson has brought a fresh vision to the University of Iowa and she knows how to move the campus forward, innovating in productive ways,” Richards said in his speech at the ceremony. “The people of Iowa are fortunate that Barbara Wilson chose to accept the challenge and the opportunity of leading this university.”

The UI’s leadership highlighted the significance of Wilson being installed on the 175th anniversary.

“For 16 of the last 27 years, the University of Iowa has been led by a woman. That’s a record to be proud of,” Ted Abel, director of the Iowa Neuroscience Institute and chair of the department of neuroscience at the Carver College of Medicine, said at the installation ceremony in Hancher Auditorium on Friday.

He said he is confident that Wilson will continue the legacy.

“We as a university community are excited as Barb Wilson joins us in the trend and joins these ranks. of the University of Iowa’s distinguished leaders,” Abel said.

“The university plays a really important role not just for its students and faculty and for this community, but for almost the state of Iowa,” Gregg said in an interview with the DI. “They train and provide professionals in all different fields that serve all across our state.”