Sen. Chuck Grassley’s most prominent Democratic competitor visited Iowa city on Wednesday where she highlighted her plan to reach Iowans and emphasized the importance of term limits in the Senate. 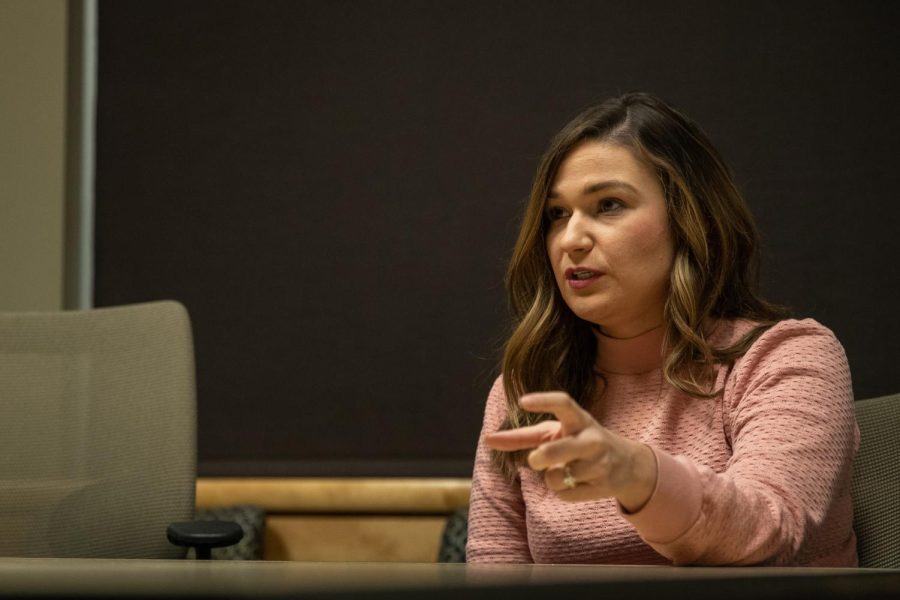 Abby Finkenauer, the major Democratic contender taking on Republican Sen. Chuck Grassley, said Grassley no longer stands by the principles that brought him to Congress in an interview with The Daily Iowan on Wednesday.

Finkenauer said that although he has been in Congress for 47 years, Grassley does not vote for the legislation she believes would be best for Iowans such as health care funding, stating that Grassley would not bring to the Senate floor bills that she helped pass in the House.

“You’ve got somebody like Chuck Grassley, who I think used to be that guy who used to stand up and fight but he has clearly forgotten where he comes from,” Finkenauer said.

Grassley is largely favored to win reelection in November, and his seat is rated “Safe Republican” by Sabato’s Crystal Ball, a project of the University of Virginia’s Center for Politics.

But Finkenauer, formerly a U.S. Representative for Iowa’s 1st Congressional District, said Iowans are not being represented the way she thinks they should be.

“I’m in this because I love this state, because I’m fighting for the friends, family and neighbors that I grew up with here who have, again and again, seen their state and their government leave them behind way too many times,” Finkenauer said.

Early on in her campaign, Finkenauer pledged to only serve two terms. She said she’d still abide by that pledge, and that she thinks she can accomplish her goals without decades in office.

“I saw that you have people [in D.C.] who have been there for so long where they get cozier with the corporate lobbyists versus their constituents. And there’s a disconnect that starts to happen,” Finkenauer said.

Finkenauer said she isn’t worried about having raised less money than Grassley in her campaign. She uses her funds to hire staff and reach out to Iowans from across the state, she said, because one of her biggest priorities is to connect with Iowans from different backgrounds.

Finkenauer said that by reaching voters on social media as well as conventional campaigning avenues like television and physical door-knocking, she will be able to cut through her opponents’ messaging and reach voters.

“Folks don’t trust what they see anymore from people running for office because there is so much information out there,” Finkenauer said. “So we need people, peer to peer, being able to talk to each other. That takes organizers, that takes folks doing that work and that’s why the resources are so important.”

Making sure that young Iowans stay in the state is one of Finkenauer’s priorities as she runs for US Senate, claiming that it was one of the reasons why she decided to run for the US House of Representatives.

“They were trying to find the opportunities and they want it to stay, but they were struggling to do it, especially if they were first generation college grads, like like I was and figuring out how they’re going to pay back their debt, all of that if the jobs weren’t paying enough for them to be able to do so. And so they were leaving,” Finkenauer said.

As a returning member to Congress, Finkenauer said she expected to still advocate for Iowans while being a voice in the Senate that she believes Iowans need. She said that when she was a Congresswoman, her party would get policies passed that the Republicans in the Senate would not want to move. This encouraged her to run for Senate.

“Making sure I worked with anybody if it helped us, but stand up to anybody who hurts us, right? That is something I’ve never been afraid to do,” Finkenauer said.

Iowans’ nature of employing hard workers is something that Finkenauer thinks needs to be highlighted at the federal level.

“We’re in which we need a little bit more of, I think in this country and to be able to take some of those ideas that come out of this state and be able to uplift them on the federal level is one of the best parts of the job. And that is something that I would double down on and do even more of as, Senator,” Finkenauer said.