George’s Best Gyros, acquired in 2006 by Mark Paterno, will be opening a permanent location in place of Dumpling Darling on Iowa Ave. 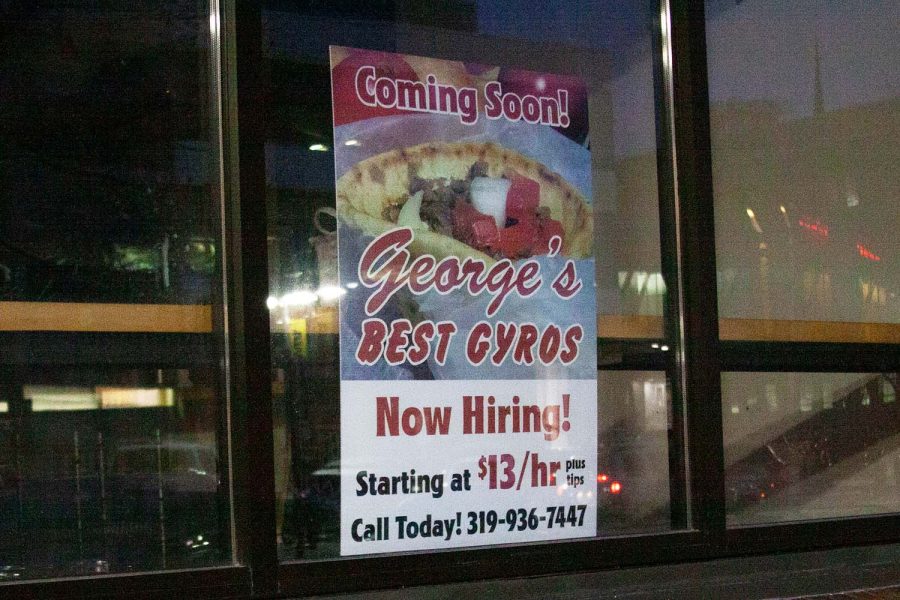 Late at night on the weekends, college students can commonly be found swarming George’s Best Gyros’ food cart in the Ped Mall. By April, the stand will have its own brick-and-mortar location as well.

The announcement from owner Mark Paterno comes less than two months after the opening of Marco’s Game Day on South Clinton Street. Paterno also recently opened a permanent home for the Marco’s Island food stand on Linn Street. He’d started the business in 2000.

The location had previously been home to Dumpling Darling, which closed in December.

George’s Best Gyros has been an Iowa City food truck since the 1980s. Paterno bought it in 2006. He said he’d always been jealous of the speed of George’s Best Gyros’ stand in comparison to his grilled cheese stand.

“Every grilled cheese sandwich is custom made and, best-case scenario, we can make it in 90 seconds and the gyros were just so much faster,” Paterno said. “I had always wanted to buy it, and one day George was ready to sell it, and it just worked out.”

The new George’s Best Gyros location will have an emphasis on efficiency, Paterno said, as it will have the smallest menu out of any of his restaurants. The restaurant will serve gyros, hot dogs, and fries.

“It’s potentially the best business model I’ve ever had because it’s going to be so lean and sleek and focused,” he said.

Paterno said the gyro place differs from his other restaurants, which have an abundance of different items on the menu. Paterno said it’s a bad habit of his to create too many options.

Rubye Ney, an employee at Marco’s Island and Marco’s Gameday, said the late-night hours will be great for bringing in people from the downtown bars. Adding the limited menu may also help the restaurant get customers in and out of the door quickly, she said.

Ney said the location could also be a big help.

“I think the Dumpling Darling space has always been prime real estate,” Ney said. “And I can imagine that with George’s Gyros being really close to the Ped Mall, it’ll be a really popular late-night restaurant.”

Paterno said his success during the pandemic has come from his longevity in the business, having owned Marco’s Grilled Cheese for over two decades. He said his career as a realtor also allows him to have a source of income outside his businesses.

Having brick and mortar locations has benefited Paterno in the past, he said. Marco’s Game Day previously only operated on gamedays, but the decision to move it to a fulltime location allowed it to have more space for Hawkeye merchandise that it didn’t have outside Kinnick.

“I had two small warehouses full of Iowa Hawkeye stuff,” Paterno said. “… It’s money sitting in a garage essentially, and I didn’t want to have to wait until next football season to try to recoup some of that money.”

Dylan Chambers, a store clerk at Marco’s Game Day, said the store has gotten off to a good start and should continue to improve as the weather warms up.

“It’s just going to have a bunch of different stuff that people haven’t seen before and we urge them to come check it out for themselves,” he said.