Henry B. Tippie, University of Iowa alum and benefactor, dies at 95

Henry Tippie, the namesake of the UI’s Tippie College of Business, died on Sunday at age 95. 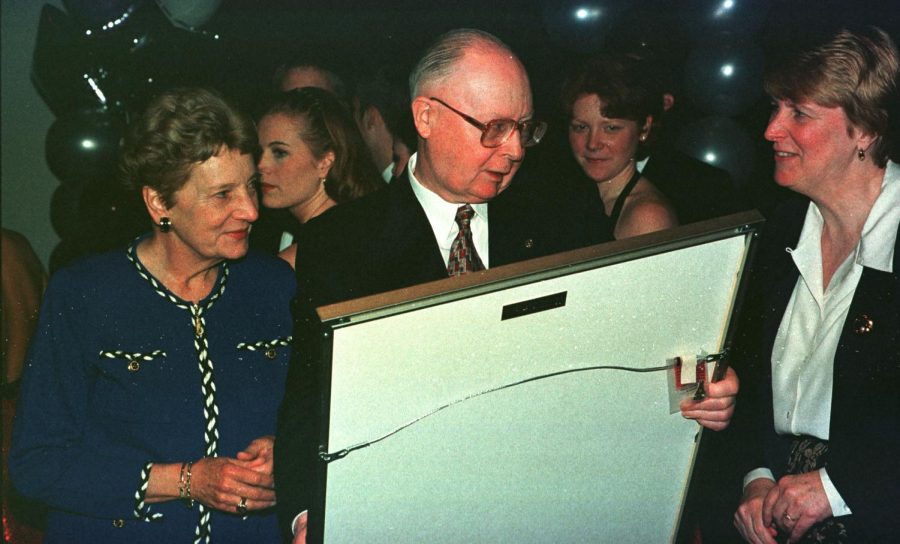 Henry B. Tippie attends a ceremony after the College of Business was named in his honor on April 9, 1999. Tippie donated $30 million to the business college that year.

Namesake of the University of Iowa business school, Henry B. Tippie, died Feb. 20 at age 95. He was at his home in Austin, Texas.

Tippie was from Belle Plaine, Iowa, where he grew up on a dairy farm. From the time he was a toddler he helped his family by accompanying his father on deliveries and learning how to milk cows.

In 1999, Tippie, a University of Iowa alum, became a major benefactor of the UI after contributing $30 million to help support students and faculty at the College of Business. In the same year, the UI’s college of business was named after him.

UI Tippie College of Business Dean Amy Kristof-Brown came to the university in 1997 and met Tippie in 1999 when she was in a faculty position supported by Tippie’s funding. When she became interim dean and then dean in 2020, she said Tippie was a big supporter.

“Henry has been very involved with us from day one,” she said. “…Talking with him was just a real pleasure. He’s been incredibly supportive of me. As I stepped into this position … he would send me supportive emails that would just be two or three lines that said, ‘I think you’re doing a great job and I’m so glad you’re in charge of things there.'”

Kristof-Brown will remember Tippie as a humble, kind, and hardworking person who was supportive of every level of the college of business and all of its initiatives.

Tippie started his education in a one-room schoolhouse, the same schoolhouse his father attended, through eighth grade, according to a press release from the business college on Monday. After graduating from Belle Plaine High School in 1944, Tippie enlisted in the United States Army Air Force at age 17 and fought in World War II.

On June 5, 1944 Tippie reported for duty at Camp Dodge in Johnston, Iowa. He deployed to the Pacific the following year as World War II reached its final months.

In the Air Force, Tippie served as a chief clerk for medical administration at the twentieth Army Air Force headquarters in Guam. Tippie served for 27 months.

After serving, Tippie returned to Iowa and pursued a degree in accounting at the UI because of the Servicemen’s Readjustment Act of 1944. He graduated in 1949.

Tippie entered the workforce and helped lead John W. Rollins and Associates which is now Rollins Incorporation. The company was built into a $2 billion company under Tippie’s leadership.

Tippie is now honored on the Wall of Leaders at the New York Stock Exchange because of his leadership at Rollins Inc. His name is one of only 16 to be recognized.

Tippie first donated $10 to the UI in 1957, eight years after graduating, and donated every year since then, the DI reported in 1999.

Gary Fethke, former dean of Tippie and an interim UI president, was the person who had the idea to name the college after one of its biggest benefactors. Fethke said he was friends with Tippie for 40 years and will remember him as a disciplined and focused individual who was always gracious.

“He was quite a guy and it’s hard to explain how good he is at so many things,” Fethke said. “He was detail-oriented and had a deep love of the University of Iowa. He always said it gave him everything and he was paying back less than he received.”

At the time Tippie was named, Fethke said there were no academic buildings on campus named after a private donor. The UI is lucky to have Tippie as an alum and a donor, Fethke said.

“He was a businessman with an enormous business acumen,” Fethke said. “The businesses he helped create and the value he has added to society is enormous. And yet he was so focused on small details and he would point things out to you you may not see. He was also extremely good with students and was always thinking about them first.”

Outside of the college of business, Tippie was also involved in the UI’s athletics department. In 2017, Tippie endowed Iowa’s athletic director position with a $5 million donation.

Gary Barta, the Henry B. and Patricia B. Tippie Athletic Director, released a statement about Tippie’s death on Monday morning. He said he lost a “true friend” on Sunday. 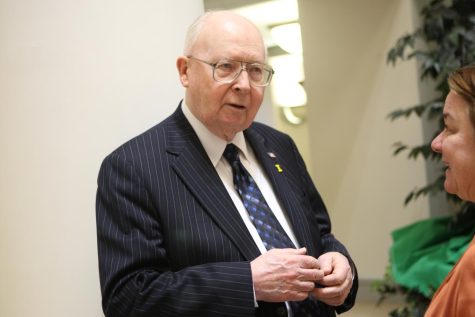 “Everyone who had the good fortune to know and learn from his expertise and leadership, and share his friendship, is better professionally and personally as a result of that relationship,” Barta wrote. “His contributions to the University of Iowa are so widespread; his footprint in so many areas of our campus and the state of Iowa will last forever.”

“He was also a friend to our coaches, staff and student athletes,” he wrote. “His philosophy and approach to business was like our approach to football which is to work hard, assess what you did well, prepare to do better and then move forward. My initial hope when meeting Henry and Pat more than a decade ago was that they would make a gift to the football program. Not only did we receive a financial contribution, but it was the beginning of a close and wonderful friendship.”

Ferentz said Tippie was gracious, generous, and down to earth.

Kristof-Brown said the majority of the positions and scholarships Tippie has funded in the past 30 years are endowed and will continue to be funded after his passing. The college is also connected to Tippie’s wife, Patricia, and three children who will be integral to the college moving forward, she said.

“We are really looking forward to all four of them continuing to be involved in decisions we make in the college and how we continue to support faculty, students, and programs going forward,” she said.