Jackson, the vice president for medical affairs and dean of the Carver College of Medicine, will return to a faculty position to continue his research of infectious diseases. 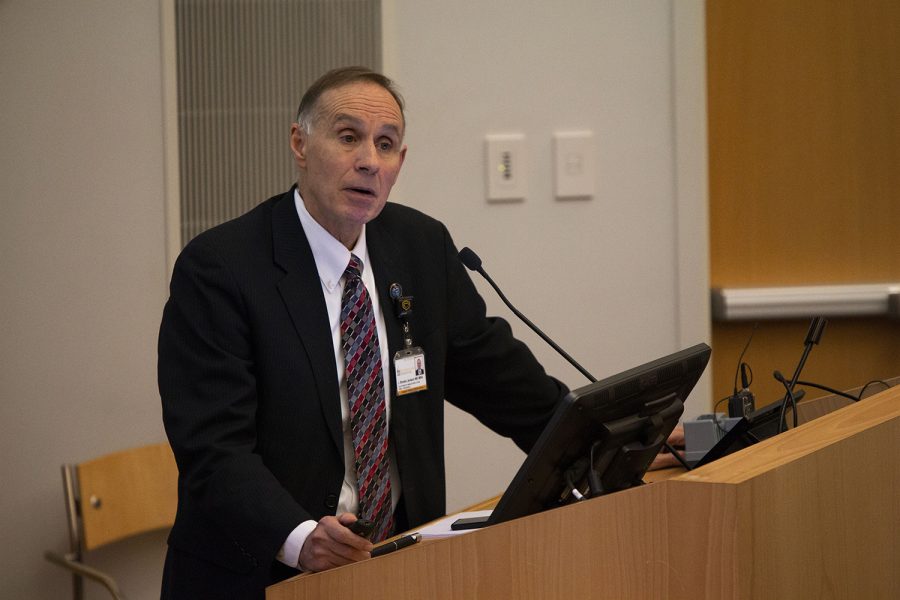 Brooks Jackson, MD, MBA, University of Iowa vice president for medical affairs and dean of the UI Carver College of Medicine, speaks to attendees during "State of the Enterprise: Strengths, Challenges, and the Path Forward" at the Medical Education and Research Facility on Wednesday, Nov. 28, 2018. Jackson provided an overview of UI health care research.

University of Iowa Vice President for Medical Affairs and Dean of the Carver College of Medicine Brooks Jackson is leaving his administrative positions and returning to a faculty position.

Jackson began at the Carver College of Medicine in 2017 and led the UI and its health care wing through the COVID-19 pandemic and financial changes. His departure follows the exit of UI Hospitals and Clinics CEO Suresh Gunasekaran, who is beginning as the president and CEO of Health at the University of California San Francisco in March.

In a press release on Iowa Now Thursday morning, Jackson said while he is proud of the work his team has done during his tenure, including addressing COVID-19 and receiving the largest gift in university history, the “time is right for new leadership to pilot the organization for the next level.”

Over the past five years, Jackson has also increased extramural research funding by more than 26 percent and helped receive approval to plan for a 10-year facilities master plan, according to the release. That master plan includes a new patient tower, a teaching and research building, and a clinic building.

UI President Barbara Wilson said in the press release that Jackson’s presence in the position has been an asset to UI Health Care and campus.

“While Brooks may be stepping down from his current position, I am so pleased that he will be staying on as a member of our faculty so he can continue his research on infectious diseases,” Wilson said.

The UI will launch a national search to find Jackson’s successor. Jackson will continue to operate in the role until a replacement is found.

Executive Vice President and Provost Kevin Kregel said Jackson remaining in his role will provide a stable hand as the university searches for new leaders in the Carver College of Medicine.

“Throughout this process, I will work with President Wilson to engage our faculty, staff, and students to hear their thoughts on the future of the college and our health care system,” Kregel said.

The search for Jackson’s successor will be led by College of Dentistry faculty member and former interim UI President John Keller and Department of Anesthesia chair Cynthia Wong.