The Mark Morris Dance Group will visit Hancher Auditorium on Friday with their performance ‘Pepperland,’ a tribute to The Beatles’ Sgt. Pepper's Lonely Hearts Club Band album. It will be their first time in Iowa City in 25 years. 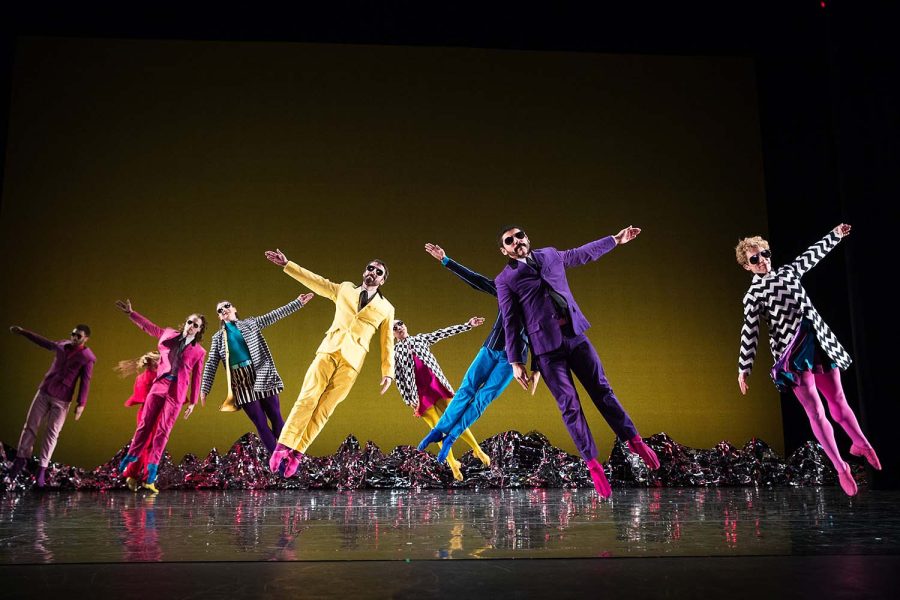 Dancers costumed in fluorescent 60s’ style suits move in a trance-like dance to reworked music from the Beatles’ Sgt. Pepper’s Lonely Hearts Club Band. This is the Mark Morris Dance Group’s Pepperland – and they’ll be at Hancher Auditorium on Friday, Feb. 18.

The esteemed Mark Morris Dance Group hasn’t been to Iowa City in 25 years, and Chuck Swanson, Hancher’s Executive Director, is excited for their return.

Swanson said he is particularly excited for the Pepperland show because of its colorful aura and the celebration of familiar 60s music. Being able to remember when the album came out makes it even more special for him.

“None of the current dancers have ever performed with MMDG at the Hancher Auditorium before,” Black wrote in an email to The Daily Iowan. “We’ve heard wonderful things about the new theater, and can’t wait to see it in person and perform there.”

The city of Liverpool asked Mark Morris, founder of the Mark Morris Dance Center and choreographer of Pepperland, to create the production for the 50th anniversary of Sgt. Pepper’s Lonely Hearts Club Band in 2017. The group has regularly performed the piece ever since.

Morris said that when he was approached, he found the idea for this type of tribute “crazy and good,” which is why he decided to do it.

Both Morris and Black said that they look forward to being able to tour around the country again, and particularly getting to share Pepperland with a wider audience.

“I would like people to leave the performance feeling like they’ve had just enough, and they adored it, and they want to go have a drink and talk about what a wonderful time they had together,” Morris wrote in an email to the DI.

Pepperland was scored by composer Ethan Iverson, specifically inspired by The Beatles’ songs “Sgt. Pepper’s Lonely Hearts Club Band,” “With a Little Help From My Friends,” “A Day in the Life,” “When I’m Sixty-Four,” “Within You Without You,” and “Penny Lane.”

Iverson has a long history with Morris, including being his music director for five years. He was also in a jazz group called The Bad Plus, which he said gave him experience reworking rock music.

When Morris asked him to write the music for Pepperland, Iverson said he recalls heading to an old friend’s house, listening to the original record while holding the cardboard cover in his hands, and calling Morris back to say, “I can do it.”

Pop music often has an underlying dark side as opposed to the original sound, Iverson said. His reworked version of “With A Little Help From My Friends” in Pepperland has some unexpected starts and stops through the music, as well as a “wrong” baseline, composed specifically with Morris’ choreography style in mind.

“There are way too many Beatles tributes out there, in fact since we launched Pepperland there is even more than before,” Iverson wrote in an email to the DI. “However, there is still room to do something unexpected and valid if you know how to look.”