The University of Iowa Spirit Squads and women’s gymnastics team are preparing for a new practice space after approval from the state Board of Regents. 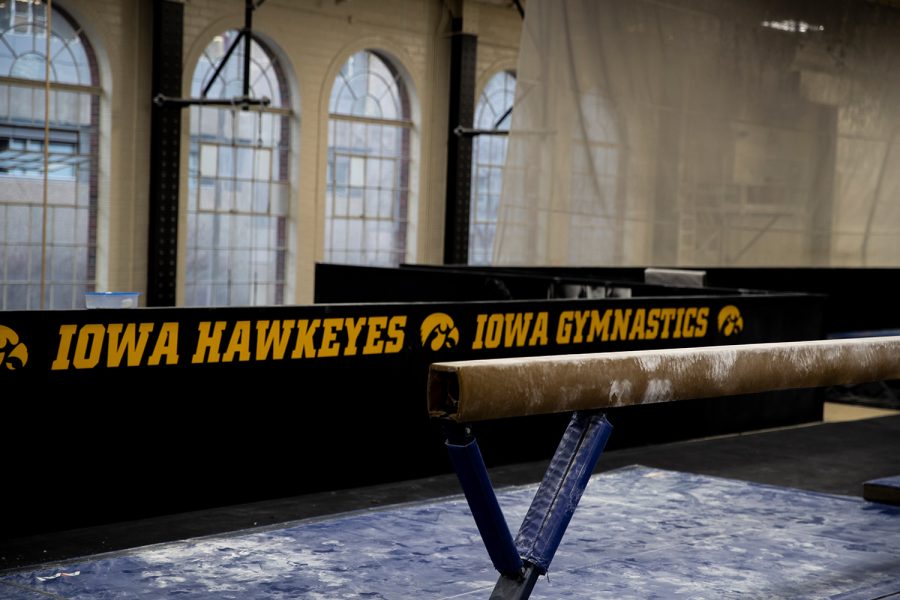 The Iowa Spirit Squads and Iowa Gymnastics training facility in the Field House is seen on Tuesday, Feb. 15, 2022.

The University of Iowa Spirit Squads and women’s gymnastics team are planning for a new and improved practice facility.

The UI Spirit Squads include the UI dance team, cheer team, and the Herky security squad.

“The Board of Regents in January just approved moving ahead like ‘Yes, you can start talking about this project,’” said Gregg Niemiec, spirit squad coordinator and head cheer coach.

He said the project is at ground zero and still in its early stages.

“There’s not drawings of it yet as far as architectural type stuff and everything,” Niemiec said.

The facility will go up near the Hawkeye Tennis and Recreation Complex, the soccer complex, and the sports medicine building, he said.

The building will be fully funded by gifts to the athletics department, Senior Vice President for Finance and Operations Rod Lehnertz told the Board of Regents in January.

“They [recruits] have to be able to see themselves feeling safe, first of all, and then being able to sustain training of the skills that they’re currently doing or upgrading [at the facility],” she said.

Libby said the field house, where the gymnastics team currently trains, is outdated and a new facility would make training more efficient.

“[Field house] is an extremely old building,” she said. “It doesn’t have everything that you would need to have, so like having to leave the building to go somewhere else to do this [or] to do that, is inefficient.”

“Anytime you have upgrades to a facility, you’re trying to address the newest safety issues that may come about,” she said.

Grace Winders, a fourth-year UI dance team member, said the team practices wherever they can get space because they can’t always practice stunts in current facilities.

“We practice at the field house, Carver, and Halsey,” she said.

At the field house, the dance team has encountered interruptions, Winders said.

“People just don’t understand what we’re doing, so a lot of times, there are people working out in there,” she said. “I have to be like, ‘Oh, sorry we have practice, can you leave?’”

“Just finding a practice space where we can have and not worry about if our space is going to be needed by somebody else,” he said. “We share space in the field house. So, there’s days when they have a health fair that we can’t have practice or there’s certain intramural sports that start right after us so we’re always trying to move out of the way.”

Niemiec said the new facility will include Marley floors, which are rooms with specific flooring for dance studio use.

The spirit squad’s goal is for the facility to be completed within four years, Niemiec said, and there’s a lot of work to be done before that.

Winders said the team was surprised when they were told about the possible facility, prior to its approval.

“[The coaches] told us that it was going to be a thing and we were like, ‘What? This has been dreamt about forever,’” she said.

Libby said the goal now is to grow, especially in women’s sports.

“I’m absolutely thrilled about the prospect of being able to go to the next level and feeling good about what we have as a total because I feel like this is just that little bit of a missing piece of the puzzle,” she said. “I think that this will be amazing.”