Radha Velamuri, who studies biomedical science at the University of Iowa, is looking for conclusions on chronic stressors that affect everyday brain functions. 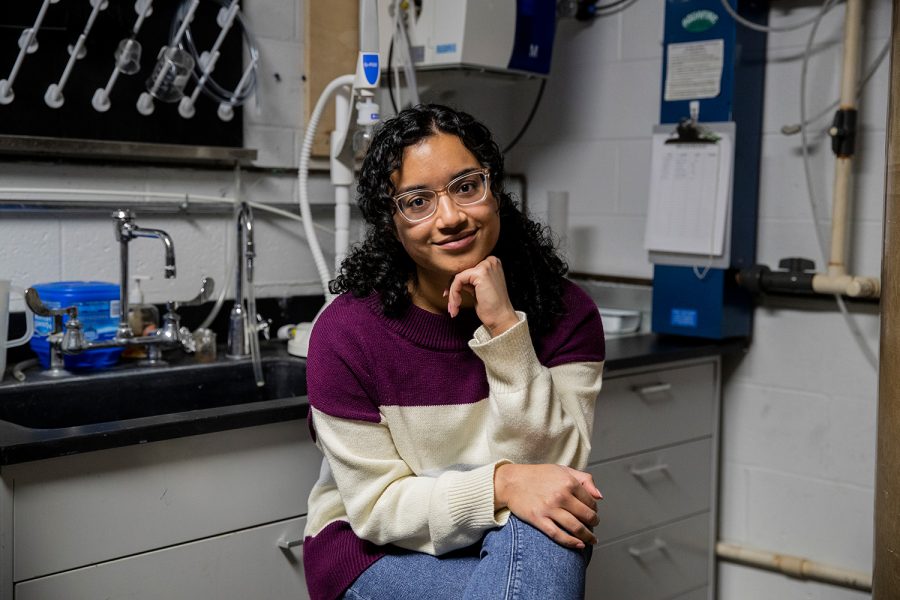 Radha Velamuri poses for a portrait on Wednesday, Feb. 9, 2022 in the PappaJohn Biomedical Discovery building at the University of Iowa in Iowa City.

Radha Velamuri has always been interested in science, as she and her family have struggled with health issues in the past.

She said that was one of her biggest influences to go into medicine. Her journey with research started the summer before her senior year of high school. She conducted research in the department of gynecology at the University of Iowa Hospitals and Clinics and presented her project on reproductive toxicity at the national Junior Science and Humanities Symposium, as well as the Intel International Science and Engineering Fair.

“I fell in love with it when I did the OB-GYN project,” Velamuri said.

Velamuri, a fourth-year student, is one of 82 students featured in the university’s Dare to Discover campaign, organized by the UI Office for the Vice President of Research, and displayed on banners in downtown Iowa City.

After her time doing research in high school, Velamuri arrived at the UI and wanted to be involved in more. In college, she has been a part of numerous research projects, from wet labs with microscopes to clinical data extraction.

She’s currently researching vulnerability to chronic stress in the neuroscience lab. Velamuri and her team study cellular, molecular, brain-network-based, and behavioral data to figure out how the brain works.

Velamuri’s goal is to study brain data to see how a person can avoid chronic stressors by using mouse models and building electrodes in the lab.

“Radha is one of those people that loves research, she loves learning,” said Melinda Licht, Iowa Center for Research by Undergraduates program coordinator. “She’s also this really, really sweet human being. She’s extremely genuine and personable, ready to talk to anybody at a moment’s notice.”

Velamuri is a firm believer in communication — one of the reasons she has been so successful, she said.

“I always communicate about what’s going on,” she said. “It’s all about managing my time and if I can’t do it properly, I ask for help.”

Leslie Revaux, interim director for strategic communications for the UI Office of the Vice President of Research, said the office reaches out to staff members, professors, and students for nominees each September for the campaign.

“We usually get around 200 applicants, and we normally only take about 50,” she said.

This year was an exception, with 82 students recognized. Revaux said students were only recognized virtually last year and the department wanted them to get a chance to be featured on the downtown streets like in previous years.

Velamuri is in the undergraduate-to-graduate program, meaning she is currently finishing her bachelor’s degree in biomedical science while making strides toward her master’s in public health in epidemiology.

She’s also receiving a certificate in clinical and translational science at the UI.

She said it was easy to get involved in research because the university is such a research-driven school. Velamuri is heavily involved as an ambassador for the Iowa Center for Research by Undergraduates.

Licht said she met Velamuri about two-and-a-half years ago at the center. Velamuri presented at conferences, led sessions, organized activities, and talked to classes, encouraging students who are interested in research.

“What we work on with students more is how research is going to serve them more and help them make decisions on where they want to go,” Kirby said.

Velamuri said moving forward, she plans to get into research for public health. It’s something she was putting off this semester, she said, but is extremely interested in that kind of work.

Iowa is one of Velamuri’s top options for medical school, she said, as she hopes to become a physician-scientist.

Velmuri said she is most thankful for all the people in her life that have supported her along the way.