Told through snippets of information taken from eyewitness accounts, court transcripts, and other archival material, the play calls attention to the fire's emotional and social impact. 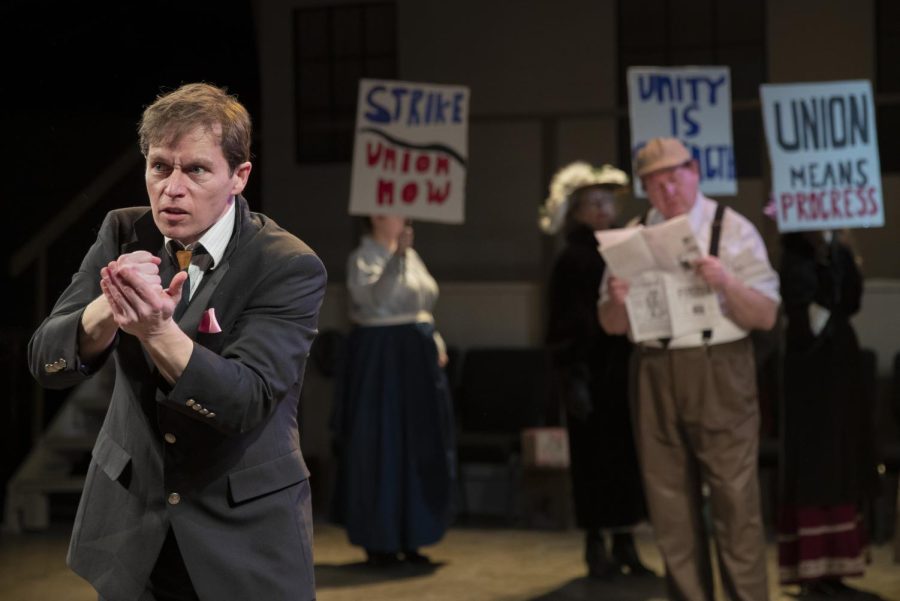 Actors are rehearsing the Triangle Factory Fire play at the Iowa City Community Theatre in Iowa City on Thursday, Feb. 10, 2022. The play is about the cause and effect of the Triangle Factory Fire on labor and women’s rights. The director Michele Hinz says “I’m looking forward to just seeing these actors shine - they are wonderful. They’ve got such a presence. They’ve got such personality and they so deserve an audience.”

146 people died at the Triangle Shirtwaist Factory Fire in 1911. Tonight and for two weekends, the Iowa City Community Theatre takes the number 146 and humanizes it through their production of The Triangle Factory Fire Project.

The Triangle Factory Fire Project tells the story of the historic Triangle Shirtwaist Factory fire. The performance holds the perspective of multiple employees and the subsequent trials that the owners Isaac Harris and Max Blanck faced.

Constructed through eyewitness accounts, court transcripts, and other archival material, the script strives to be historically accurate. Actresses Emma Hughes and Cayla Odendahl, both undergraduate students at the University of Iowa, said that they did research on the event and the characters they play to ensure authentic representation of the event and to give credit to these real people.

“I feel like there’s more pressure than anything else I’ve done because obviously there are real people who had a real impact on history,” Hughes said.

Director Michele Hinz expressed that the production team understood that this event had intense consequences on a personal and societal level. The women’s suffrage movement, immigrant rights, and worker rights are only a few themes that impacted the Triangle Shirtwaist Factory fire and the resulting changes.

Despite the broader themes that the show has, the writer, director, and cast do not forget that the victims in this case are human. Yes, social progress was made as a result of this historical event, but it was at the cost of human life.

“I think the thing about this show — and it does it really well — is bring forth the fact that these were real people who died and real people who were impacted by it,” Hughes said. “There was a lot of emotional weight whether or not the consequences or what resulted was a good thing.”

Both the acting and the historical reality of the production pack a great deal of emotional impact to the audience. Jen Brown, one of the actors in the production, said that the company looks forward to sharing that emotion with a live audience.

“This is a real-life tragedy that actually happened. But, there is a great deal of power in catharsis,” Brown said. “We’ve all been living a real-life tragedy and having permission to just kind of grieve for real-life tragedies is a powerful communal thing that we don’t do communally anymore, and I think this could be a really great opportunity to do that.”

Actors and actresses perform close to the audience, giving viewers a direct connection to the cast. The proximity lets the audience feel transported through history, turning into an observer of the tragic event that unfolded on stage.

Despite the abundance of characters, the cast is relatively small. Actors embody multiple roles, and Brown said differentiating between them can provide a unique and challenging experience.

“Several different types of shows require you to play a variety of roles and I think it’s great fun differentiating the characters,” Brown said. “You make conscious decisions about how you’re going to alter the way that you walk and the way that you hold yourself when you use your voice.”

There are several elements that are explored through the telling of the Triangle Shirtwaist Factory fire, many of which are seen today. Director Hinz said that if the audience were to take away one central theme from the show, it would be that everyone deserves the right to vote.

“It’s not the primary thread of the show. But it’s such an important aspect that if you don’t have a voice in a democracy, if somebody tries to stifle your voice or take your voice away from you, you can’t be protected, you can’t live the way you ought to live.”