Opinion | Getting rid of USG Constituency senators is a bad move

This school year, the Undergraduate Student Government will be reallocating funding away from current board positions that are reserved for students belonging to marginalized groups on campus. 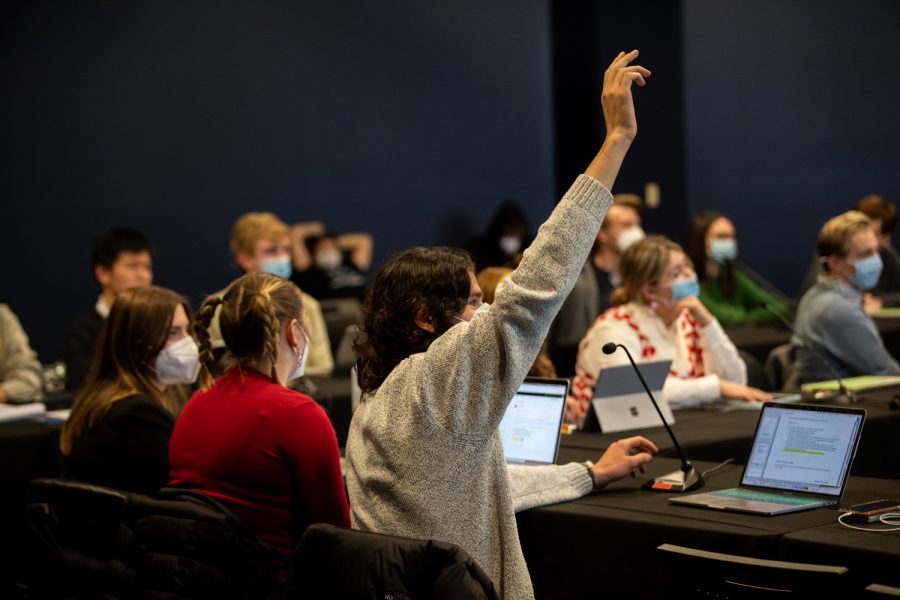 A senator of the University of Iowa’s Undergraduate Student Government raises his hand to ask a question pertaining an amendment during a USG meeting at the Iowa Memorial Union on Feb. 10, 2022.

Without concrete plans for the future, the University of Iowa Undergraduate Student Government is considering restructuring the Justice and Equity Council by removing the Constituency Senator positions.

The Black, Asian-Pacific Islander Desi American, Disability, Latinx, and Native American seats are unfilled as of the spring 2022 semester.

Although some reform ideas — including increased funding to student organizations representing marginalized groups on campus — may appear progressive on the surface, this move by USG is another form of white-washing student spaces on campus.

Jack Lauer, current Speaker of the Senate, said USG is considering replacing the constituency seats with better money reallocation instead of new positions.

“There is a recognition amongst USG members that most students who are able to hold positions have some sort of privilege,” Lauer said. “Constituency Senator positions may be inaccessible to people belonging to marginalized populations due to financial concerns, time restrictions, or other reasons. Funding could be given directly to student organizations which may serve these students better than USG can.”

Lauer went on to explain how USG plans to collect the student opinion on the future of these constituencies.

“We are going to send out a survey in the upcoming months specifically targeting multicultural organizations and cultural houses,” Lauer said.

This is the moment I became less satisfied with answers from USG representatives.

We have to expect this institutional culture to interfere with every board meeting, class routine, and organizational procedure.

My fears for the future of USG are threefold:

Without reserving room for people of color to speak for themselves, USG could easily turn into a panel of white peers making decisions for the best interest of others on campus.

Second, expecting to communicate with a representational group of marginalized students — and not just those who are privileged to have time for or care to be involved with campus cultural organizations or houses — is a white-washed view of the world.

We don’t expect white students to be automatically interested in joining organizations tied to their race. Why do the same to students of color?

Lastly, true reform would be making access to USG positions equitable for all students on campus. Removing Constituency Senators is merely an escape from facing the reality that USG appears to be actively fighting to maintain a middle-class, white majority.

During my research, troubling signs of this white-washing were evident.

One such example was that it was impossible to locate exact demographic data on the 2021-2022 USG members. No such report has been publicly published since 2018.

The USG members I spoke with, including Lauer, seemed ready to face harsh critiques of their actions. As two self-identified white students, they were willing to accept this was foreign territory for both of them.

While I appreciate the hard work USG members do for UI, I can hardly see how reform for marginalized students is possible when their political voices are in danger of being stifled.