Sen. Adrian Dickey, R-Packwood proposed a bill that would require teachers to stand up and recite the Pledge of Allegiance in Iowa schools. Iowa education advocates and parents disagree. 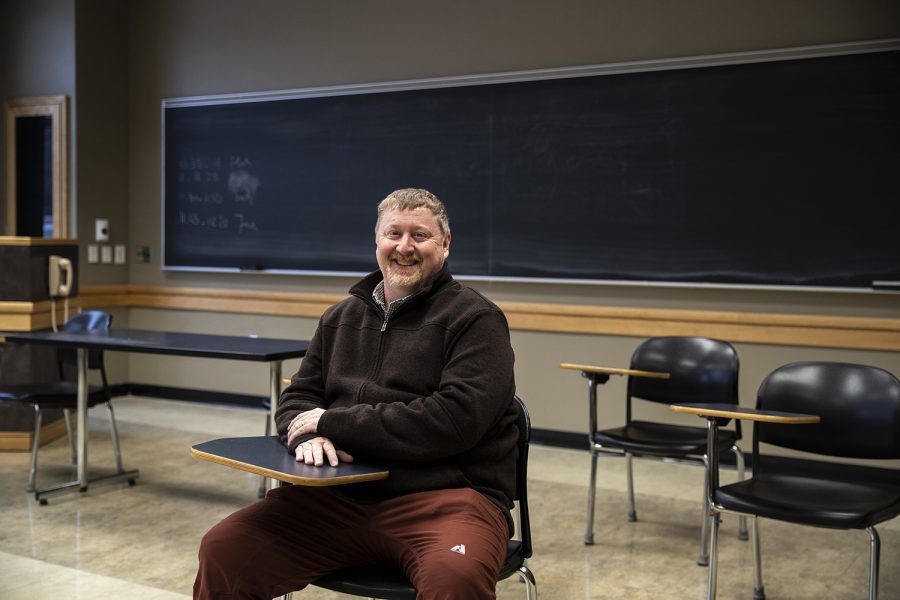 Shawn Eyestone, the board president of ICCSD poses for a portrait on Wednesday, February 9, 2022, in the Adler Journalism Communications building.

A bill proposed in the Iowa Legislature, requiring teachers to stand and recite the Pledge of Allegiance, has flustered some education advocacy group leaders, parents, and school board members.

Shawn Eyestone, school board president of the Iowa City Community School District, said the bill is “a solution in search of a problem” and the school district already has rules in place to keep teachers from trying to influence students’ political views.

“[If] a teacher in a kindergarten class isn’t participating, are we expecting our six-year-olds to be the whistleblowers and be the police of that to tell somebody the teacher’s not participating?” he said.

The proposed bill in the Iowa Legislature also would bar teachers from making “unpatriotic commentary on the United States” when talking about the pledge or attempting to politically influence students.

The bill, proposed by Iowa Sen. Adrian Dickey, R-Packwood, follows a 2021 law requiring the Pledge of Allegiance to be recited in every Iowa public school.

After multiple attempts to contact Dickey, The Daily Iowan did not receive a response.

“If you tell teachers they can’t go against the pledge,” he said. “The next logical step means that they have to be for the pledge, right? It’s sort of a binary choice at that point.”

Stephanie Bennett, a parent of a seventh grader in Iowa City Community School District, said she doesn’t feel the Pledge of Allegiance should be said in schools at all.

She said her major issue with the Pledge of Allegiance is its containment of the line, “One nation under God,” because not everyone believes in God.

“I feel that it’s potentially leaving someone out or making someone say something they don’t believe,” Bennett said.

Mike Beranek, president of the Iowa State Education Association, a public education advocacy group, said in an email to The Daily Iowan that the bill contains “egregious and punitive elements that will only serve to drive more teachers out of education.”

Karen Nichols, director and founder of Iowans for Public Education, an advocacy group supporting public schools, said the bill reminds her of loyalty oaths from the McCarthy era, in which teachers would have to take an oath not to support radical political views, with those who refused facing termination.

“I think the big question to ask is, has this already been settled to be unconstitutional way back in the ‘50s?” she said.

In Dickey’s proposal, a teacher would receive a written notice after the first violation, a one-week suspension without pay after the second, and termination after the third.

Nichols said she thinks the proposed bill is also similar to what was done in Nazi Germany, where students and teachers had to swear allegiance to Hitler, and teachers that didn’t would be dismissed.

“I’m not saying that these people are fascist, but this is creepy,” she said. “We don’t force patriotism in the United States. I just don’t think that’s who we are.”

Nichols said part of what makes her uncomfortable with the bill is her own personal experiences going to school in Mississippi in the 1970s.

During that time, Black students were starting to enroll in her school district, which tried to limit political discussion. Nichols said it stunted her learning.

“Most of the history I was taught stopped around 1950,” she said, “… So I went out into the world, ignorant of huge portions of my state and my nation’s history.”

Even as someone who considers herself to be patriotic, Nichols said she feels if teachers don’t want to stand up while the Pledge of Allegiance is played over the intercom, it’s their right.